AS paintings go it puts Fr Dougal’s skirting board portrait of Bishop Brennan to shame.

The mural of the Father Ted characters on Hackney Road in East London is a homage to the popular Irish sitcom by second-generation Irish painter John Bulley.

Bulley, 65, first painted the image on wallpaper before transferring it to the walls of Hackney Road in April — coincidentally the same time Father Ted was celebrating 20 years on our screens.

The artist, whose mother Peggy hails from the Dingle Peninsula in Co. Kerry, is surprised his comedy-inspired street art has lasted this long, and believes it’s a testament to the continuing popularity of the sitcom after two decades. 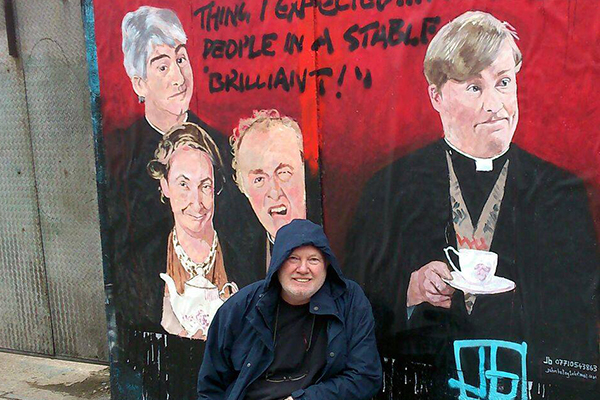 Painter John Bulley with his work

“Normally street art doesn’t last that long,” said Bulley. “People spray over it and deface it but because it’s on the street you can’t be too precious about it — I’ve done stuff which has only lasted a day before being painted over.

"But this has been up since April and no one’s touched it, which shows that people have a soft spot for it and a certain reverence for the sitcom.

“It was brutally honest, razor sharp and bloody funny. The four principle characters were well rounded, beautifully written and well acted. I don’t know anyone who didn’t get it and it has stood the test of time.”

You can check out more of John Bulley’s work here

DREAM JOB ALERT: Get paid to watch and review every episode of Father Ted

Father Ted star reveals she is a confirmed atheist

Husband of Jean Eagers formally charged with her murder