Review: Marvel's Daredevil on Netflix is a superhero with an Irish-Catholic twist

“I’M not seeking forgiveness for what I’ve done,” a troubled man tells his priest, “but for what I’m about to do.”

The confessor’s name is Matty Murdock, a guy from the Irish-Catholic district of Hell’s Kitchen, also known as Daredevil, superhero to the dispossessed. As his confession implies, Matty’s intentions might be angelic but his methods are sometimes demonic.

Netflix’s success list includes House of Cards and Orange is the New Black, an indication of its growing power.

Daredevil is the first of a planned sequence of productions drawn from Marvel’s stable of comic-book heroes. Other favourites including The Defenders and Iron Fist are also tipped for Netflix adaptations.

What’s certain is the current proliferation of popular saviours and superheroes symbolises our sense of moral panic. The current unsettled zeitgeist demands we get some fictional and emotional catharsis from our film and TV screens.

Superman, Batman and Spiderman are needed to battle the arch villains and tyrants in our midst. Sprinkled among the superheroes there also super heroines, with Supergirl and Wonder Woman slated to make their cinematic comebacks. Whatever threatens us in the real world, our fantasies might bring us some crumbs of comfort.

But of all the superheroes around, Daredevil is the most intriguing. For any comic-book figure to grip the public imagination the character requires some unique characteristics.

For Daredevil/Matty Murdock, this lies in his childhood background. Unlike other superheroes, Daredevil is from lowly origins.

Peter Parker/Spiderman is from affluent Forest Hills, while Bruce Wayne/Batman is a billionaire and Clark Kent/Superman is a god-like icon from another universe.

Matty Murdock, meanwhile, is from Hell’s Kitchen, once the archetypal New York blue-collar area. With his Irish-Catholic roots Daredevil is America’s “ethnic” superhero.

This sense of a common touch gives Daredevil an earthier feel than most fantasy drama series.

Matty Murdock (Charlie Cox) is an attorney, who with his childhood chum Foggy Nelson (Elden Henson) opens a struggling law office in a derelict district.

Blinded as a boy by toxic waste, Matty developed and honed his other senses to super-instinctive levels. He can hear through walls and smell through ceilings: “Prima cigarettes and discount cologne.”

He can detect and anticipate his opponent’s movement in a fight, a power honed by his martial arts mentor Stick (Scott Glenn). As both a lawyer and a superhero he seeks justice for the powerless who are bullied by the powerful.

His antagonists include corporate criminals, international mob bosses and drug traffickers. While Superman saves the planet, Daredevil guards the neighbourhood. 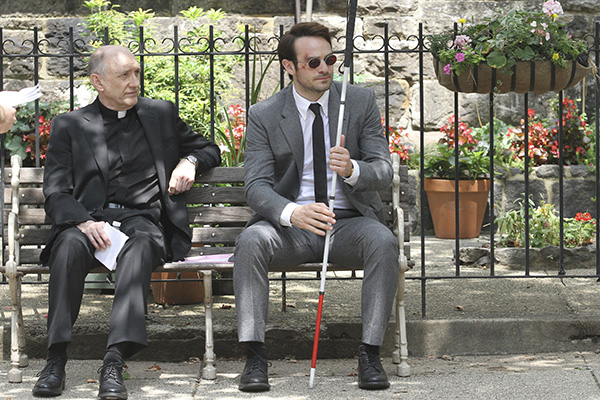 There’s almost a Celtic cut about the creation of the Daredevil character.

As scholars of mythology point out there’s something distinct about Celtic myth, as against say Greek or Roman. Whereas Zeus and Jupiter are considered magical “gods”, the likes of Cuchulainn are more grounded.

Similarly, while Superman and Spiderman can fly or climb skyscrapers, Daredevil must rely on strictly human traits, even if they’re sharpened to ultra-performance. Daredevil exhibits a homely or humble nature.

This humility was missing from the cinema version of the Marvel narrative.

Mark Steven Johnson’s Daredevil (2003) starred Ben Affleck, who couldn’t appear humble if it killed him (Johnson’s movie was an early US hit for Colin Farrell).

Cox is more suited to the part (you might recognise him for Boardwalk Empire where he played vicious IRA man Owen Sleater) as his screen charisma neatly complements his smiley good looks and boyish humour.

“You take a lot of punishment without complaint,” a nurse comments. “It’s the Catholicism,” he quips.

The dramatic tone is somewhat uneven, shifting from extremely violent to unnuanced cornball sentiment. However, the screen colouring uses the shady chiaroscuro of the comic-book origins, symbolising Daredevil’s moral ambivalence, and our own.

It’s discomforting to realise that our man tortures bad guys on our behalf. Watch and see.

Watch the trailer for Marvel’s Daredevil on Netflix: