PICTURES: Adorable pictures of a young Niall Horan before he joined One Direction

IF CASH and job offers run dry for Niall Horan after One Direction’s split he could always pursue his original childhood dream – being in the army.

Our exclusive childhood photos show the Mullingar singer started out with fantasies of being a Sergeant Major.

He constantly dressed in khakis as a kid while also toying with the idea of being a singer.

Niall, now 21, poses with a gun in one of the snaps when he was around five.

Other snaps from the lad’s old Bebo account show him larking around in camouflage. One picture is captioned: ‘Sgt Major Horan’.

Scroll down for our exclusive gallery of pictures from Niall's childhood

Another shows Horan giving the thumbs up in full army gear with the caption ‘Thumbs up for Ross Kemp’, referring to the ex-soap star’s army shows.

But Horan eventually plumped for practising singing as a kid.

More of our exclusive family photos show Niall as a five-year-old wannabe singer performing for his family with a plastic guitar and microphone.

Niall’s dad Bobby reckons his lad, who has an elder brother Greg, 28, was destined to be a star.

“He was always a performer,” says Bobby, who still works at the butchers’ counter of his local Tesco despite his son’s fortune and has turned down Niall’s offer to buy a new home.

“Niall loved singing and dancing, and always had a toy microphone in his hand.”

Bobby, who split from Niall’s mother Maura Gallagher in 1999, has admitted the future superstar loved dressing up in army gear when he was young.

But family apprehension about a possible army career were shot down when Niall continued singing at his secondary school Coláiste Mhuire. 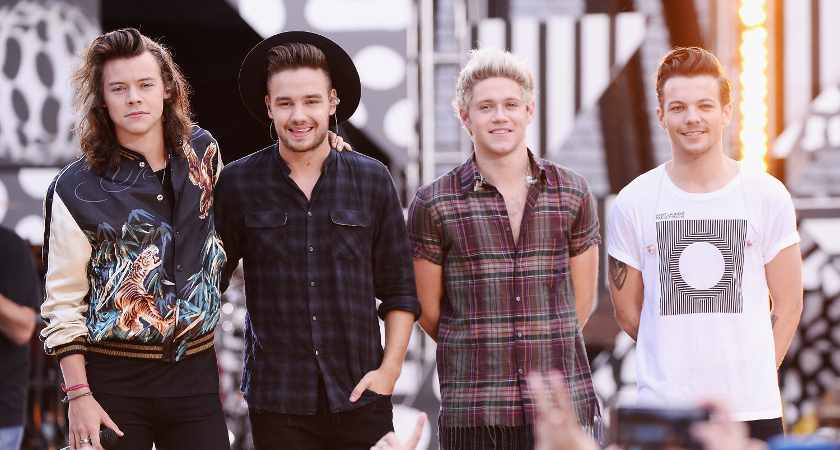 The foursome are going it alone after Zayn Malik's exit. Picture Getty Images

He then attended auditions for the X Factor as a solo performer, where he met One Direction bandmates Harry Styles, Liam Payne, Louis Tomlinson and former singer Zayn Malik.

Although the band have yet to officially comment, reports say 1D are going on a year-long break from March once they finish promoting their new album.

The news prompted an explosion of hysterics from 1D fans reminiscent of the time when a hotline was set up to comfort girls distraught at Take That’s break up.

Harry Styles is also rumoured to be pursuing a solo career, while Liam Payne may be set for a spell as a David Guetta-style DJ.

Louis Tomlinson apparently wants to be a judge on The X Factor next year alongside 1D mogul Simon Cowell.

Check out our gallery of exclusive pictures here...