Interview: Shane Lynch on Masterchef and 20 years of Boyzone

“I can’t believe that it’s 20 years since we were dancing like eejits on The Late Late Show in front of Gay Byrne.

Shane Lynch is in great form as we chat.

He’s happy, his family are healthy and he’s about to go back on the road in November with Boyzone.

I caught up with him on his annual family holiday (about 40 members of the extended Lynch family in Portugal for a fortnight) and he was as chatty and positive as ever.

Since we last spoke, he and his beautiful wife Sheena and four-year-old daughter Billie-Rae have been joined by a new arrival, eight-month-old daughter Marley-May.

Shane is a great family man, a devout Christian and the kind of fellow you can always rely on.

What you see is what you get. He is known for his love of all things motor-related, so it was with some surprise that last month he took up a culinary challenge on BBC One's ratings hit, Celebrity Masterchef.

On that show, fans saw Shane cook his way into the semi-finals despite being out of his comfort zone.

It’s obvious that the show marks a bit of a step up from the kind of cooking he’s used to producing.

“I didn’t watch the show at all so I didn’t realise it’s as intense as it is,” he says with his customary honesty. “It’s kind of like a reality show and a learning process mixed together. I will learn things from it and cooking skills are great to have.

“In misunderstanding the format like I did, I didn’t know that you had to know how to cook! So it’s all down to you and your skills, but I have the skills now.

"I was thrown straight into the deep end and I learned along the way, little hints and tips. I think because I was the underdog, and with my lack of knowledge, it actually worked out in my favour in the end. They saw the potential in me and I did well.

“At home I’ve always wanted to eat more fish — I just didn’t know how to cook it. I’ve come away from the show with that knowledge. We eat fish a lot more now in our house, that’s for sure. The show has given me a solid interest in good, healthy eating.”

Shane admits to feeling “pressure” to begin with on Celebrity Masterchef but quickly adapted to his new surrounds and knuckled down.

“It’s a serious show and it’s a big deal. When I started on it I was so nervous that I was rattling plates because my hands were so jittery. A lot of it is to do with presentation.

"I didn’t think it was going to be that difficult. I was surprised at how nerve-wracking it was to just cook a meal with cameras watching you. But I loved it!” 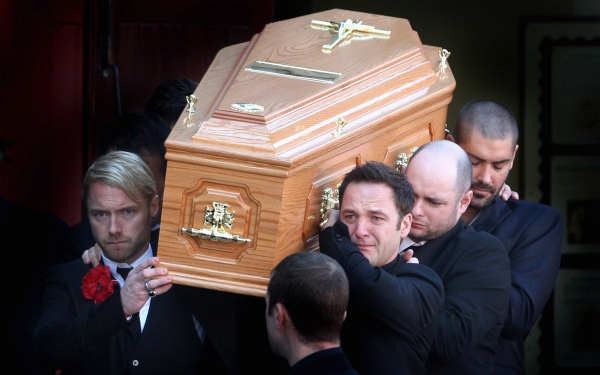 Once the summer is over Shane and his bandmates, Keith Duffy, Mikey Graham and Ronan Keating, will head into a studio and begin rehearsals for their forthcoming tour.

He’s relishing the prospect of taking to the stage again with his fellow Boyzone stars. “I can’t wait to go back on tour. November 28 in Dublin at the O2 is the first gig and from there it’s on to Belfast. I’m really looking forward to it.

"We’re nearing the end of the summer now I guess and after that everything will build towards the tour and that first night. When we get home from this holiday it will be straight into rehearsals.

“The 20 years together have been pretty amazing. To be able to go back on stage after all those years… it’s incredible really.

"We are proud and we are amazed. It’s wonderful that we can still fill an arena and that people are still interested in Boyzone. I think a lot of that has to do with the fact that we are all individuals and then we come together. What we have is special.”

That first appearance on The Late Late Show in 1993 is now the stuff of TV legend, the boys (and they were just boys then) dancing wildly and grinning away to some awful dance tune while the audience and the nation looked on bemused.

Who would have ever thought that they would go on to become one of the biggest-selling acts in music history?

Shane laughs now at the memory and there have been many, many great moments along the way over the past two decades. But one memory is always there and he speaks with great pride whenever the name Stephen Gately is mentioned.

They were extremely close, Shane and Stephen, the best of friends. He adds: “One of the biggest things for us going back on tour is that when we are all together Stephen is very much still alive.

"He’s alive in the music and in the songs. Our personalities when we are together reflect him. He’s there with us. He’s alive. Steo will always be around when we are on the road together. He was a very special man.”

Stephen’s untimely death in 2009 at the age of 33 shocked the world and how the bandmates dealt with his passing brought a huge amount of respect from people, including many who were not fans and didn’t know anything about Boyzone.

I ask Shane just why is it that so many people have so much time for these likeable Dubliners?

“It’s not for me to answer that question. We are just honest lads and we get on with life. We’re grafters, we’ve never really gone away. The work we have chosen to do (away from Boyzone) is honest work.

"We’re not trying to be something we are not.”

Away from his work with the band, Shane also runs Prestige, his own motor company in west London. A new project is keeping him busy there until the time comes to head into the studio and rehearse.

“It has been non-stop on the car front. We’ve been busy building a fleet of monster trucks that will be going on the road across Europe to promote an energy drink.

"They’re massive big American-style pick-up trucks. Plus we’ve a heap of cars piling in after them because it’s ‘Cannonball Ireland’ soon. It never stops!

“I love to be busy. Life has been very good to me. I feel blessed.”

Boyzone kick off the British leg of their 20th anniversary tour in Cardiff on December 1 before ending in Manchester on December 22.

Which celebrities were born on St Patrick's Day?