FINISHING touches were added to the much-anticipated Art of A Nation exhibition at the Mall Galleries in London this morning ahead of its official opening tonight. 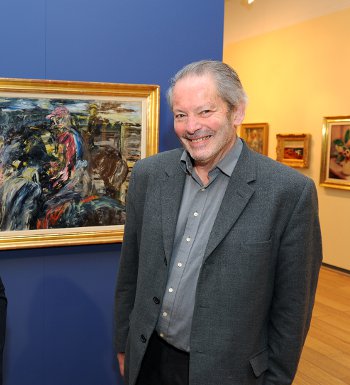 Nicholas Usherwood, co-curator of Art of a Nation, with 'Now or Never' by Jack B Yeats (Photo Mal McNally)

Seventy works feature in the prized collection, which were revealed at a press preview this morning, ahead of the exhibition’s official opening by Irish Arts Minister Heather Humphries this evening.

Speaking ahead of the opening, Minister Humphries commended the work of her Department and the Crawford Art Gallery in Co. Cork for bringing the “significant” exhibition to London.

“This is the first major exhibition of Irish art in London for more than three decades,” she explained.

“I am delighted that my Department is supporting this exhibition at the Mall Galleries, which I have no doubt enhances the already considerable appreciation for Irish art and culture in London,” she added.