Born in Kilkenny, actress Jessica Regan grew up in Tipperary but has family in Cork and Clare. She studied English and History at UCC before moving to London in 2004 where she attended the prestigious RADA. She has a string of theatre credits to her name, but landed her first major TV role playing Niamh Donoghue in BBC One’s daytime drama Doctors which is filmed in Birmingham.

I am in bed recovering from a viral infection. Lols.

This decade. In your thirties you care less but seem to get more.

Mathilda by Roald Dahl. I read it age eight and wanted from then on to be the smartest girl in the room.

You should know about my sister’s band LUX on Soundcloud. Beautiful electronic ambiance. Unusually, she is on the machines Kraftwerk-style while the lead vocals are male courtesy of the brilliant Colin Lee. 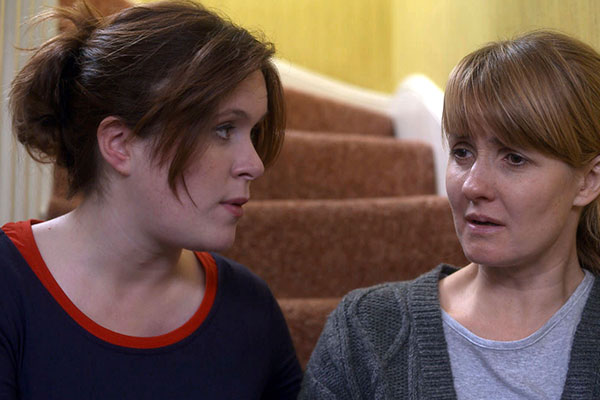 Jessica Regan and Katy Carmichael on the set of Doctors (Photo: BBC)

I would like to move my lovely job to London. I stay in Birmingham during the week to film Doctors for the BBC. Birmingham is a great town but I miss my friends and the Tube. You really need to be able to drive in Birmingham, FYI.

No, but I can recommend an interesting podcast… RuPaul’s What’s the Tee?

You might never feel as found as you want but you’re never as lost as you feel.

The Apartment. It is a perfect film. Every line, shot, performance, scene.  It’s a dark delight.

I live in Camden. The best thing about it is how everything is on your doorstep, great food, shops and pubs. The canals are gorgeous for walking. The worst thing about it is, well… there are a lot of committed drug-takers in Camden and it can be a scary walk home.

There is no one occasion. It could be to spare feelings, save a life… it’s down to the person and those affected by the consequences of the lie to answer that.

Instead of answering that nigh on impossible question I would direct you to the marvellous Claire Ferguson-Walker, a hugely talented sculptor. I covet her pieces greatly.

I believe I’ve yet to meet the gentleman. Until then, my nieces. They make me go weak at the knees.