IRELAND'S top earners of the last year have been revealed in a new list published by The Sunday Times.

The Sunday Times Rich List surveys the wealth of the 300 richest individuals and families in Ireland in a range of areas including entertainment, sport, business, technology and construction.

U2 have topped the list for a second-year running, with a combined wealth of €647 million.

Former One Direction member turned solo artist, Niall Horan is the only person under the age of 40 on the list. He has seen his wealth rise by €8 million in the last year, largely thanks to a successful debut solo album.

Television producers Mark Burnett and Roma Downey have come in second place on the list with a shared wealth of €443 million.

The man with the quick feet, Michael Flatley, sits in third place with earnings of €230 million.

Ireland’s wealthiest actor Liam Neeson has €113 million to his name, followed by peers Pierce Brosnan with €72 million and Daniel Day-Lewis with €56 million. 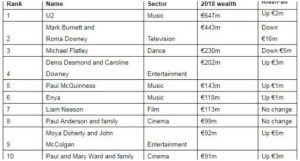 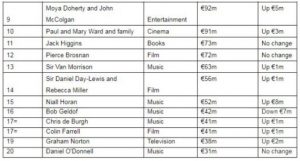