The Weir
By Conor McPherson

IN TRANSFERRING to the West End, Josie Rourke’s exceptional production of The Weir was always going to lose something in the shift in gears.

Moving from the intimate confines of the Donmar, the potency and atmosphere of its initial 2013 run is lost a little in the switch to the much larger Wyndham’s Theatre. That said Conor McPherson’s modern classic remains an unmissable work.

Set in a rural Sligo pub, we meet three auld country lads who spend the subsequent 105 minutes exchanging ghost stories with a Dublin “blow in” - and that’s essentially the plot. What the play might lack in action, however, it makes up for with mesmerising dialogue.

Shy and awkward Jim (Ardal O’Hanlon) is a fellow bachelor acting as full-time support to a mother “fading for years”. He tops up McPherson’s picture of three single men suspended in their isolation and binded by booze.

Animated by the arrival of Valerie (Dervla Kirwan), the trio are aggrieved that the giggly Dubliner is being shown around the locality by local success story Finbar (Risteárd Cooper), a showy, married man who “got out”. 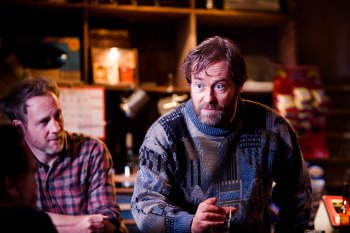 The Weir is transferring to the West End next year

As the conversation swings from the jovial to the ill-natured, the four men begin to re-animate their past of fairy roads and the departed in the vein hope of impressing Valerie, who shocks them all with her own supernatural story.

Josie Rourke direction places greater emphasis on the play’s more comedic moments as she caters for the transfer to a larger theatre. Her new production is also more visceral and plays in direct contrast to the intimate and personal nature of the Donmar run. There, the snug nature of the theatre offered the illusion of actually eaves-dropping on the pub conversation, something lost in Wyndham’s.

The characters’ anger and rage is also ramped up, particularly in the exchanges between Jack and Finbar. While this adds to the theatricality of proceedings, it lessens the play’s potent realism.

On the positive side, the bigger stage affords the actors the chance to jostle a little for bigger presence, something which Cox laps up. It’s a joy to witness him in full flow and, though his accent at times crosses the Irish Sea, his closing tale of lost love is an example of masterful writing and still delivery.

Elegant and poetic, The Weir placed McPherson among the ranks of theatre’s greats. This mesmerising production serves his work well. Not to be missed.

The Weir runs at Wyndham’s Theatre, London until April 19

Conor McPherson on The Weir, drink and getting his break in London