TRACKING down award-winning multi-instrumentalist Tim Edey proved to be a bit of a task.

The Kent-born musician is currently on tour in the US with The Chieftains, so when we finally managed to speak he was somewhere in Indiana and very much enjoying the tour with Paddy Moloney and Co, of whom Tim says: “He never tires, he is just incredible.”

Apart from touring America with The Chieftains (quite a big thing for Tim as he has had to overcome a flying phobia), he has in fact recorded and toured with most of the major names in Celtic roots music including; Altan, Mary Black and Christy Moore.

Tim got his love of music from his father. “My dad is a really good guitar player,” he told me.

“I started on the old upright piano and then, when I was six, Dad came back with a piano accordion so I didn’t actually play the button box until I was about 14.

"I had been playing a bit of whistle but where I lived in Kent there was no Irish music or branch of Comhaltas so I just learned from music in the house. There was always music playing in the house — The Chieftains, Joni Mitchell, Simon & Garfunkel… folk if you like.”

Tim’s father is Welsh and his mother was born in Dublin. His parents lived in Cork for a while and also in Bray, Co. Wicklow, plus some time in Kilburn before finally settling in Kent. Regular trips to Ireland during holidays helped to develop his awareness of Irish music.

He is now a collector of musical instruments, although he tries not to hang on to too many. “I lived on a boat for about three years,” he told me. 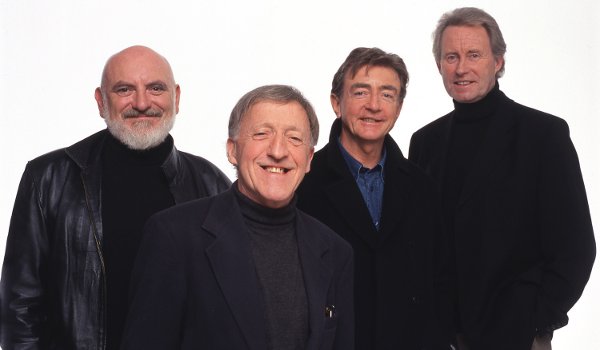 Tim is currently on tour in the US with The Chieftains

“Because of space restrictions I got used to playing just one guitar. I have a few but I’m terrible because I don’t really play them. I play this battered old Yamaha. Some musicians can be quite snobby when it comes to guitars. I get slagged off and some people ask me why I don’t get myself a decent guitar.

"Well, I did get a beautiful guitar made for me but I just couldn’t get along with it. You know what it’s like on the road, you just need a good workhorse. Because we are plugging in a lot, the old electro-acoustic guitars are great. Once you put electrics on, it doesn’t really matter very much.”

What is his favourite instrument to play? “That’s a very hard one,” he says.

“These last few years I’ve been really lazy. I used to play lots of things like piano, banjo, whistle, a bit of bass, but nowadays I seem to have become this box and guitar player.

"I do love the accordion, it’s a fantastic instrument but I find it easier to express myself on the guitar. You can learn to do anything on it if you have the time. It’s certainly the most versatile for singers.”

Released last year, Tim’s latest album, Sailing Over The 7th String is a brilliant example of the accordion’s versatility. It kicks off with the pulsating Cooney’s Polcas featuring Tim on his nylon string Yamaha guitar, followed by the gentle Rumba Negra then into hornpipes followed by the hauntingly beautiful Journey to Mull.

The album closes with My Prayer, the second of Steve Cooney’s tunes on this release. Steve also features as a guest on both of his own compositions.

The trend nowadays seems to be for musicians to form different alliances. Tim has played with lots of people in different setups, but does he have a favourite combination?

“It’s a difficult question because I have been lucky enough to play with a lot of people I would have listened to,” he says.

“They have been my heroes in fact, people such as The Chieftains, Sharon Shannon and Michael McGoldrick of course. I am equally happy like playing tonight with The Chieftains where I will just fit in as best I can. I back them up on guitar and I play a bit of box.

“Sometimes when I look around it all does seem a bit surreal because I’ve been listening to them for so long. I am also happy just playing solo but I must admit that there is something special about Michael McGoldrick.

"I don’t get to play with him very often but when I do it brings out something special. He is a legend. It’s really funny you know because he always speaks about Matt Molloy but when I talk to Matt he is crazy about Mike’s playing.”

Tim has also performed quite often with Brendan Power. “Oh my God yes that is one person I should mention,” he says.

“We have played a lot together but we are just taking a break at the moment. We have had some great times together and I think he is probably the best harmonica player I have ever heard.”

RTE seek singers for Eurovision 2019 despite calls for Israeli boycott

As Mary Black embarks on her last British tour, she talks about giving up life on the road and turning 60