Wilde about Oscar: Merlin Holland on Salomé, Pacino and his grandfather

EARLY in his documentary about the re-make of Oscar Wilde’s Salomé, Al Pacino is seen walking around Dublin city centre.

His whistle-stop tour includes a visit to the National Gallery where the legendary actor is mobbed by adoring fans. Inevitability, a grinning teen sprays a hail of imaginary bullets towards Pacino. In turn, the Scarface star unleashes a round back at the boy. You sense the young scamp would struggle with the latest project from the man who played his favourite movie gangster.

The same could be said for the fair-weather Oscar Wilde enthusiast, or indeed anyone whose knowledge of the great Irish playwright extends to a spattering of his best one-liners and The Importance of Being Earnest.

Through Salomé, Al Pacino takes on one of Wilde’s most challenging works, which was first penned in French in 1891. That year heralded the publication of his classic novel The Picture of Dorian Gray. It was also a period in which the writer met Lord Alfred Douglas, or ‘Boise’, with whom he would go on to conduct a tumultuous affair that would precipitate his eventual imprisonment in Reading Gaol.

This Sunday (September 21), Al Pacino delivers his theatrical film version of the play as one half of a double-bill set to play in cinemas around Britain. Salomé was shot over four frantic days in Los Angeles, in 2006, at the same time its company performed live readings of the show in the evenings.

Wilde Salomé, an accompanying documentary, probes the trials and tribulations of the making of the project. The behind-the-scenes look is similar in style to Pacino’s directorial debut of Looking for Richard, in 1996, which featured major scenes from Shakespeare’s Richard III.

As then, Pacino’s own obsessions are laid bare as he works to get the film to fruition. He has been involved in productions of Salomé since 1992 and claims to have gone “a little mad” over Wilde’s play since he first saw it performed in London in 1989 with Steven Berkoff in the role of King Herod.

The American’s adaptation here stays true to the lyrical verse language of Wilde’s story, which Pacino acknowledges has met accusations of being ‘florid and over the top’.

Occasionally the language grates and prolonged repetitions of the film scenes in Wilde Salomé don’t do it any favours. It’s not explicitly clear why there is such a panic for the company to complete filming in under a week either. That’s the premise on which the documentary hooks despite Salomé’s premiere not arriving until the 2011 Venice Film Festival - five years after it had been filmed. 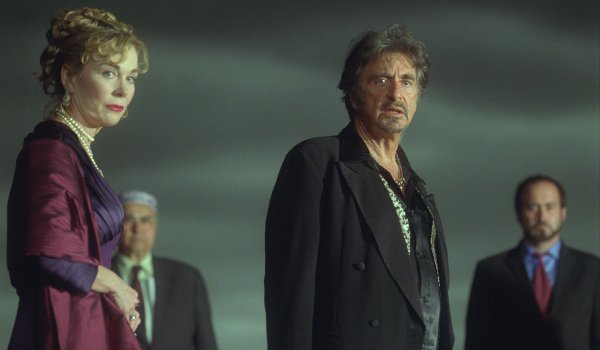 An image from Al Pacino's Salomé

At one point Pacino rambles an explanation of sorts, saying “it’s all about the money”. These minor gripes aside, there is a lot to admire about the works. Of course, this is helped by the strength of Wilde’s story.

Themes explored in the late nineteenth century work remain relevant today, from the sexualisation of youths to the cyclical tyranny of leaders – and even parallels to the appalling beheadings which are taking place in Iraq and Syria. In his role as Herod, Pacino gives a solid performance. Any stresses and strains from his multiple roles add to his otherworldly portrayal of the deranged King.

It’s not the best turn though. That goes to Jessica Chastain. While Pacino may have snubbed the Oscars in 1973, unhappy at being nominated as Best Supporting Actor for his role as Michael Corleone in The Godfather, he’d surely accept second to the California-born actress here.

When filming began, Chastain was an unearthed talent. Subsequent successes through films such as The Help, Take Shelter and The Tree of Life have underscored her talent and she’s terrific as Salomé.  It’s a view shared by Merlin Holland, the sole grandchild of Oscar Wilde.

“I was completely bowled over when I first saw her playing Salomé,” he trills over the phone. “It's a remarkable piece of work. She would have been, what, thirtyish at the time? But she managed to convey all that sultry sexuality and the trying out of her charms on Herod as a 16-year-old girl.”

Holland is an author, lecturer and broadcaster. He has written many books based on Wilde’s life and works. The 68-year-old appears for brief spells in Wilde Salomé, the result of an afternoon spent with Pacino in New York. He also praises the director for giving credit to Steven Berkoff’s much-feted version of the play.

“It's very good of Al to acknowledge his indebtedness to a previous production, but he's made this one very much all his own,” he says. Noting Pacino’s career path, Holland says he was at first intrigued at how a man who played so many “tough-guys” in the past would suddenly became interested in the “prince of decadence” in apparent opposition to previous characters.

“I think the link is this very dark play,” he continues, adding: “It's not only a tragedy, there's all sorts of overtones of necrophilia and incest. One thinks Herod today would be having his collar fingered by [Operation] Yewtree, wouldn't he?”

When asked to draw a comparison between Wilde Salomé and Looking for Richard, Pacino has previously said: “Everyone knows Shakespeare, they have an image of who he was and they have feelings about his work. When you talk about Oscar Wilde, they say: ‘who’?”

Holland accepts the notion that Wilde’s quotability and aspects of his reputation may have seen him sacrifice part of his place in the popular literary imagination.

“It's partly Oscar's own fault,” he agrees. “He projected a personality during his lifetime which survived him for many many years after his death. What he left behind was essentially [the perception that he was] a first grade funnyman, trying, and struggling, to get above the second division in what perhaps people would call literature.”

These ideas began to change with the publication in 1962 of Wilde’s “immensely readable” letters which offered a warts and all view of the writer.

“People began to think 'there's more to this man that meets the eye'”, says Holland. “And then Richard Ellmann published the four essays called Intentions and that really shows him at his sparkling best as far as they are humorous, thoughtful, philosophical.”

However, the changes were slow to trickle down through the academic world and on to the wider public. Holland adds: “I think he only ended up officially somewhere in the Oxford English Literature curriculum sometime in the 1990s.”

Could this slow change be at least in part influenced by his being Irish and therefore a default outsider in England? “Well I think it probably is,” says Holland. “Once you start looking, you realise that his Irishness is deeply ingrained. It’s everywhere. There’s no doubt about it.”

He references one of Wilde’s letters to William Gladstone in which he wrote: ‘I and all my countrymen owe a deep debt of gratitude to you for promoting the cause of Home Rule.’

Holland continues: “‘And in 1893 when he threatened to take French nationality. He says: ‘I’m not English, I’m Irish which is quite a different thing’.

Of course, that sounds fairly trite today but when you think Ireland was part of the United Kingdom then and there wasn’t really a distinction. You were British in the sense that Great Britain and Ireland were part of the Union. So for him to have made a point of saying ‘I’m Irish’ is much more dramatic at the time than it would be today.”

Holland says his own works have tried to portray the multifaceted sides of his grandfather.

“There are a lot of dichotomies: the English and the Irishman; the homosexual and the married man; the writer who loves ideas, but who also loves talk,” he adds.

Another objective is to provide a sense of balance to those who have tried to re-write or sensationalise Wilde’s past.

In contrast to many of those in charge of literary estates who rule with the kind of authoritarian fist their forebears would likely have hated, Holland rarely steps in unless his grandfather is being misrepresented for obvious financial ends.

Holland has a son called Lucian who read Classics at Magdalen College in Oxford. Does he have any desire to follow in his father’s footsteps?

“No, not really,” he answers.  “And I’m quite glad because it tends to take over your life. He has a healthy disregard, but an equally healthy respect, for his lineage.”

When asked about how fresh Wilde reads today, Holland is in no doubt. “The interesting thing is that whenever I go to Paris and visit his grave - to check that everything is OK and that there aren’t too many lipstick kisses on the glass - the vast majority of people who visit the grave are certainly under 30 and maybe even people under 25,” he says.

“I think he represents a sort of strange role model of constructive rebellion against the dead hand of authority. The Victorians had certain standards and codes of behaviour and so on and he didn’t stick to them. He didn’t believe in them; he rebelled against them.”

Holland’s own co-written play, The Trials of Oscar Wilde, recently completed a British tour with a sell-out run in London’s St James’ Theatre.

Added to interest that has spiked about Pacino’s projects, it’s clear that Wilde’s longevity today shows no sign of diminishing. His global reach is perhaps best summed up by Pacino in a scene during Wilde Salomé when he speaks about the ubiquity of Richard Strauss’ opera which is based on the play.

Pacino says with genuine enthusiasm: “I don’t think there’s a time when this opera isn’t being performed somewhere in the world.”

Salome and Wilde Salome will be screened at the BFI in London this Sunday (September 21). A Q&A with Al Pacino and Jessica Chastain hosted by Stephen Fry will follow and be broadcast live to cinemas around the UK and Ireland