ANN MARIE HEALY was born into a family of 16 children in the rural village of Ballinaboy in north Co Mayo.

In common with her peers, she enjoyed the freedom and joy of living in the countryside, surrounded by family and friends.

But then things began to change dramatically when she was five years old due to the onset of rheumatoid arthritis, a progressive inﬂammatory condition that causes damage to the joints.

“When I was a child, arthritis was just a big word,” she says. “All I cared about was doing the same things that my school friends were doing, but it was hard.  At school, I had difﬁculty writing and would get very tired.”

There is no cure for the condition but these days, if it is caught early, drugs can be quite preventative.

She readily acknowledges that she has had several “bad patches”, where she has found things particularly tough.

For example, in her ﬁnal year of college, she had to have extensive joint replacement surgery, which meant completing her diploma from home.

“Throughout my life, I’ve had to deal with chronic pain.  I take morphine and employ conscious strategies to keep my mind off the pain…listening to music, watching a video, and generally keeping my mind active," she says.

"If you don’t keep busy, you become more aware of the pain and it takes over.”

She was always concerned about becoming a burden on her family and valued her independence.

It helped immensely that they were supportive without being over-protective.

“My family knew if I needed assistance I would ask for it and were always there to support me in achieving my goals,” she adds.

These goals included pursuing several educational courses and achieving her dream of going to college at Sligo Institute of Technology, where she studied social science. 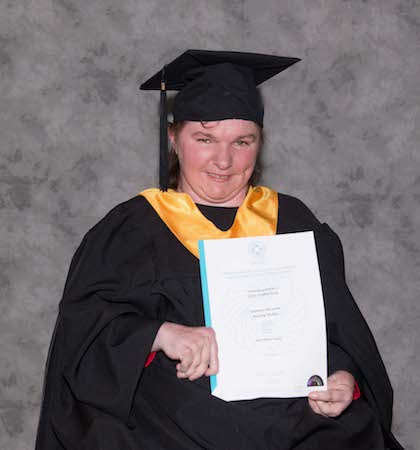 Living away from home was a big step but Ann Marie loved the whole college scene, and the opportunity to meet new people.

She believes that positive thinking and surrounding yourself with positive people, enables you to achieve a great deal despite facing daily challenges as a result of arthritis and chronic pain.

"You need to focus on what you can do," she says.

Ann Marie was awarded the Erris Person of the Year in 2008, an honour which recognizes an individual who has made an exceptional contribution to their local community.

She also works to highlight the rights of people living with disabilities and has volunteered with  The Irish Wheelchair Association, The Mayo Centre for Independent Living, Arthritis Ireland and Irish Association of Supported Employment.

“I am lobbying with Arthritis Ireland for the appointment of a full-time rheumatologist in Mayo General Hospital, so that people like me don’t have to travel to Dublin all the time," she said.

"I also believe that people with disabilities should be entitled to free transport to hospital if there is no accessible public transport available."

“I am able to live on my own with the support of home help and a PA for 30 hours a week. Having a PA enabled me to finish college and to get involved in a lot more voluntary work," she added.

"In 2005, myself and my colleague Pat from the Mayo Centre for Independent Living went to the European Parliament to try to emphasize the importance of funding for PA services to support independent living.

"I and that if you bring an issue to their attention, some politicians are very slow to act. At the end of the day, it all comes down to funding.”

“I get angry sometimes but I channel my energy into writing letters to politicians. I constantly emphasise that people with disabilities want to live independently and to work – they don’t want to be caught in a beneﬁts trap."

Ms Healy is encouraging other people with disabilities to get involved with voluntary work.

“It might just be sitting on a committee where you can contribute on access issues, or it may be volunteering in a day centre," she says.

"It really is worthwhile. Sometimes all a person wants is someone to talk to. We all have problems to deal with and we don’t like to burden our families.”

Over the years Ann Marie kept a diary, detailing her thoughts and emotions as her health deteriorated, and she was forced to overcome many challenges in coping with her disability.

Through the pages of her diary, and in her own words, she has presented a personal account of what it is like to live with disability in Ireland today. 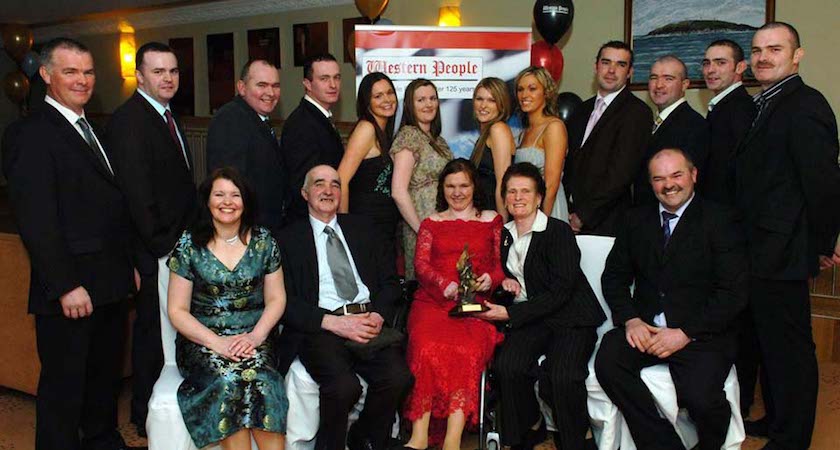 Living with disability in Ireland

"I was born into a family of 16 children, six girls and 10 boys (one brother Thomas Patrick died when he was seven months old) in the rural village of Ballinaboy in north county Mayo.

I enjoyed the freedom and joy of living in the countryside surrounded by my family and friends. When I was five years of age my parents noticed that I was very tired. They brought me to the local doctor, who diagnosed rheumatic fever and after this I had a lengthy stay in hospital.

I returned to school thinking that things would be the same. I was constantly tired and could not play with my friends as I had no energy.  My hands and neck were extremely sore and stiff. I had to take regular medication for severe pain.

I continued to attend primary school despite the fact that I had so much pain. When I was 10 my fingers and ankles were swollen and my neck was extremely stiff.  My parents brought me to see the doctor again and he referred me to a consultant, who diagnosed juvenile rheumatoid arthritis.

In rheumatoid arthritis the immune system attacks the joints. The attack can go on for a long time or come and go.  If left untreated it can cause severe damage to the joints.

I was admitted to Merlin Park hospital, Galway for many weeks, where I received physiotherapy and treatment for my Arthritis. The rheumatologist there said I would grow out of my arthritis, because it was just a bad flare up I was going through. However this didn’t happen.

I attended secondary school in the all Irish school called Colaiste Chomain in Rossport, Co Mayo.  The rest of my family went to the convent and vocational schools in Belmullet but this option was not open to me as I would not have been able to walk to the bus stop.

Instead I was to have a spin in a car to the Rossport School. While in my fourth year in secondary school I had extreme difficulty writing and had a lot of pain.  I was referred to a consultant orthopaedic surgeon in Merlin Park, Galway.

The consultant told my parents that I needed corrective surgery.  It came as a bit of a shock to my parents as I was only 15 years at the time.  He re-assured them that it was going to be a success and not to worry.

I had the surgery on my right hand. I returned to school and now was able to write without experiencing pain. Little did I know that this was going to be the first of many surgeries.

I got on with my life getting out socialising and having fun as any teenager.  After I completed my Leaving Certificate I started a training course in Ballindine, Co. Mayo in Computer Applications and Office Skills.  It was my first time away from home.

Even though I missed my family I enjoyed my independence and social life, but throughout this time I battled with pain in my joints.

Over the years I have had about 40 surgeries including having knuckle replacements and both hips, knees, shoulders and elbow replacements as well as neck and foot surgeries.

Now a wheelchair user, the Erris branch of the Wheelchair Association, was a great help and support to me.  Over the years I represented them on the Regional and National Executive Councils as well as been on the local committee.

I joined the Centre for Independent Living Mayo and they provided me with a personal assistant, who greatly enhanced the quality of my life.

This was such a necessary provision for me, as without the support of people to help with Independent living (including supports with personal needs and mobility) I would not have been able to live my life to the fullest.

I couldn’t drive myself because of the arthritis in my fingers and elbow joints, so I had to rely on my personal assistant and family to bring me wherever I wanted to go. My feet were also giving me a lot of trouble.

I was able to work with the Centre for Independent as a leader co-ordinator, work which I really enjoyed as I was supporting people with disabilities live independently.  I also joined the Mayo branch of Arthritis Ireland.

I am currently lobbying with them for the appointment of a full time rheumatologist in Mayo General, so that people with Arthritis don’t have to travel to Dublin or Galway for treatment.

They currently have a visiting rheumatologist from Manorhamilton for eleven hours a week, but this is insufficent for the 26,000 people currently living with some form of arthritis in Mayo. Arthritis Ireland have also been a great support to me.

Being from a big family has its benefits. If any of my family knew I needed assistance, they were always there to support me in achieving my goals including pursuing several courses and achieving my dream of going to the Institute of Technology in Sligo where I graduated with a diploma in Social Studies.

Dealing with a disability and fighting my corner for supports so that I could live an independent life has also been a feat at times.  I have tried to keep positive and my friends and people I have met through my life in different ways have uplifted me and given me courage.

Despite living with this ravaging disease and having to spend a lot of my life on metal wheels I am a happy person. Above all else I believe in moving forward all the time. It is very important for me to be active as it distracts me from my pain.

To stay mentally and physically healthy I have to work harder than most because I don’t cook and depend on supports to put together healthy meals.  I am aware that keeping sugary and fatty foods and salt to a minimum and eating fruit, vegetables, pasta and white meat is very important and also keeping physically active and getting regular physiotherapy. Swimming is also important.

To stay mentally active I feel that I need to have goals, to be around positive people, to keep active and ‘out there’ participating on what’s going on in the community and to be happy with what you have got.

I am now in my mid 40s and even though I cannot see a cure for rheumatoid arthritis ahead I am positive that I can continue to live a full life and have confidence in a health system that is managing to control my pain.

If I had a million euros to spend I would not want to change my life. 'The happiest of people do not have the best of everything.  They just make the most of everything that comes their way.

Be Yourself, My Diaries by Ann Marie Helay is available online at www.choicepublishing.ie or www.amazon.co.uk