TRAVEL bible Lonely Planet has named Belfast and the Causeway Coast in Northern Ireland the number one region in the world for travellers in 2018.

The Causeway Coast is no stranger to drama. Several locations from the HBO production Game of Thrones are dotted along the route.

But before the world’s most successful television drama fetched up on this spectacular coastline, it was the turn of the Otherworld: banshees, Wee Folk and of course giants, to roam free here.

The Giant’s Causeway, star of Instagram, selfies, travel shows, tall tales and books, was for centuries a geological wonder known only to kelp gatherers and sheep herders.

Its geological origins stretch back 60million years to day when molten lava began to erupt then cool and shrink.

But should you arrive there when a sea mist is shrouding the ethereal-looking black basalt rocks, and the lonely call of the curlew is echoing across the bay, you might look up this extraordinary piece of coastline and think, yes, it probably was the work of a giant.

The Causeway Coastal Route begins in the old walled city of Derry/Londonderry, perched at the top of the country. From here the road leads along the north coast.

Music is a strong tradition in these parts, not least Limavady, the home of Danny Boy. Today that song, as well as a host of local characters including fairies, serpents, highwaymen and ancient sea dogs are remembered at the Limavady Sculpture Trail.

There are also numerous world-class golf courses across Northern Ireland with links and parklands courses including Portstewart and Portrush - home to the Open championship in 2019. 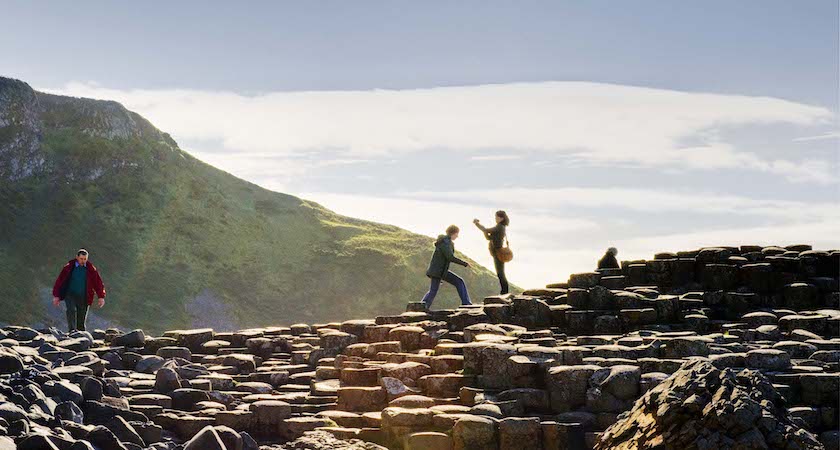 The coastline hereabout is defined by precipitous, dangerous cliffs; ideal topography for castle-building.

Should you wish to deter unwelcome visitors, there can be few better locations than on a gaunt rocky outcrop high above the crashing waves of the Atlantic.

Dunluce Castle fits the bill admirably — built by the Normans, this is the House of Greyjoy in Game of Thrones.

It’s no stranger to drama — both real and imaginary. Mediaeval forces mustered here, Sorley Boy McDonnell grabbed ownership of the castle, the galleon La Girona from the Spanish Armada smashed into the rocks below its turrets.

CS Lewis braved the stiff north-westerlies to imagine the craggy towers of Cair Paravel in the Chronicles of Narnia, while Led Zeppelin used an image of the castle on the cover of their album Houses of the Holy.

Nearby, Benone is a seven-mile strip of sand on Co Derry/Londonderry Atlantic coast overlooking Donegal’s Inishowen Peninsula. Washed by huge breakers, it’s one of the finest surfing beaches in Northern Ireland, and comes with a beguiling dune system attached.

To the westerly end of the strand stands a Martello Tower, built to help see off Napoleon on the unlikely event he’d decided to march on the village of Castlerock. Mussenden Temple, a building for which the word folly could have been invented, stands high above the strand.

The waypoints include many adrenalin-producing moments. The Carrick-a-Rede rope bridge is every bit as precarious as it sounds — swaying between Co. Antrim the tiny Carrick Island some 24 metres away, it will probably be the most terrifying trans-Atlantic journey you’re likely to take.

Before heading down the coast road and through the nine Glens of Antrim, there’s time for a quick detour to the Bregagh Road near Stranocum. Better known as The Dark Hedges, aka The King’s Road, Game of Thrones, this beautiful avenue of beech trees was planted in the 18th century.

Because of its starring role on screen, cars are today barred from entry — and it’s all the better for that. Wal down this romantic avenue today, and you could be back in the 18th century. You’ll seldom come closer to time travel. 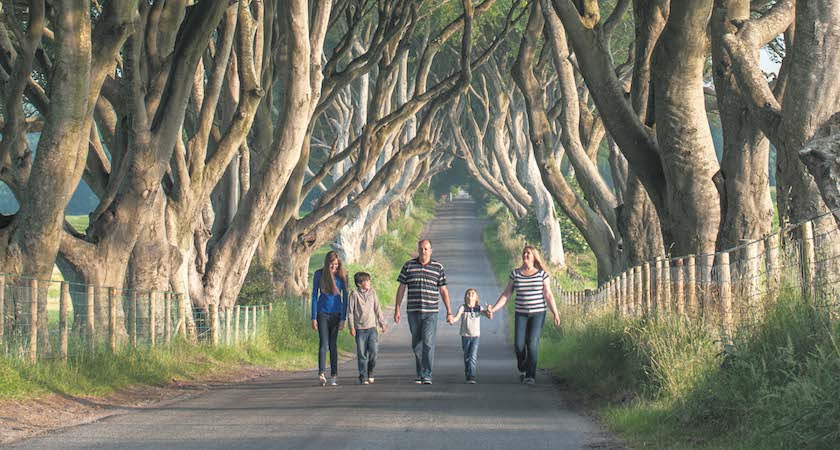 The Dark Hedges have been made famous by Game of Thrones (Picture: Tourism Ireland)

Back on the coast, and Fair Head, the north-east extremity of Co Antrim, stands the crumbling ruins of Bonamargy Friary.

Founded by the Franciscans in the 15th century, battles have raged outside its walls, hidden treasure have been buried inside. Needless to say, it’s haunted — so mind how you go.

Alongside the ancient stands the newly-furbished. The Gobbins was an Edwardian tourist attraction, now given a complete makeover allowing visitors to do a spot of cliff-climbing by means of via ferrata contraptions, in relative safety.

Distilleries and disappearing lakes are not connected, even though their both part of the Causeway Coast. Bushmills Distillery is the oldest licensed whiskey manufacturer in the world, with more that 400 years of experience in the artform.

Loughareema, some two miles from Torr Head (impressive views guaranteed) is possessed of a highly unusual topography – a chalk “plug hole” bunged up with peat. Which means you can bring a picnic and watch the entire lake vanish before your very eyes.

Along the route you can wander round mediaeval Carrickfergus Castle, look out for puffins, Manx shearwaters and other avian celebrities on Rathlin Island, or stop for tea in the lovely old village of Glenarm.

To reach the fishing harbour of Ballintoy you head down a steep, winding narrow road, with plunging cliffs either side.

The harbour and surrounding beach have also been widely featured in Game of Thrones, as have the nearby Cushendun Caves — which acted the part of The Stormlands.

It’s not difficult to see why this whole area is such a star of screen. Mighty cliffs enclose the bay, gaunt black rocky stacks emerge from the sea, and the old stone harbour seems tailor-made for adventure and intrigue.

Before the coming of the Game of Thrones, this part of the country already had its fair share of myth and legend.

St Patrick tended pigs here, on the slopes of Mount Slemish; before him the Wee Folk and the odd giant inhabited the nine Glens of Antrim. All long gone now (probably), but the atmosphere, and the landscape, remains spectacularly magic.