THE Causeway Coastal Route, one of the world’s most spectacular routes, clings perilously to a rocky coastline snaking from Co. Antrim to Co. Londonderry, before joining the Wild Atlantic Way in Donegal where you can continue the drive all the way to Cork and beyond.

On the Causeway Coastal route the road winds through postcard-grade villages and glens with names that read like a poem: Cushendun, Cushendall, Glenballyeamon, Glenarm, Waterfoot.

It passes under St. MacNisi’s School — high on Garron Point and through Glenarm huddling beneath giant cliffs.

Impossibly picturesque seaside villages like Carnlough consist of small pastel-washed houses where neat little shops vie for space with ancient pubs. Just a dozen miles away across the Irish Sea is the Mull of Kintyre.

seaboard — within living memory little more than a rough track bedded with basalt and chalk chips and pitted with potholes — is reckoned today to be in the same company as the San Bernardino Pass or the Monterey-Carmel coast road in California.

Few places in Britain or the island of Ireland hold more interest for geologists than these 100 miles of coastline hugging the North Channel and Atlantic.

At Fair Head, the north-east extremity of Northern Ireland, geology takes on a dizzying dimension with a 600ft plunge into the sea.

The centerpiece of the route is the Giant’s Causeway, a spectacular rock formation that is today a UNESCO World Heritage Site.

For centuries a geological wonder known only to kelp gatherers and sheep herders, it is an astonishing complex of octagonal basalt columns packed together.

The Giant’s Causeway is the star of millions of postcards, photographs, travel programmes, tall tales and books. But other parts of the Causeway Coastal Route are getting in on the act.

The small, highly photogenic fishing harbour of Ballintoy lies at the end of a small narrow steep road down Knocksaughey Hill. The harbour and surrounding beach have been widely featured in Game of ThronesTM, as have nearby Cushendun Caves — which acted the part of The Stormlands.

Before the coming of the Game of ThronesTM, this part of the country already had its fair share of magic and legend. St Patrick tended pigs here, on the slopes of Mount Slemish; before him the Wee Folk inhabited the nine Glens of Antrim.

The Wee Folk, the banshees and the watershees all seem to have gone now, but the atmosphere as well as the landscape — remain ethereal and magic.

Take the path less travelled on The Gobbins

Islandmagee, Co. Antrim, is a haven for walkers, ramblers and naturalists. The bird population includes kittiwakes, guillemots, fulmars, puffins, razorbills; even peregrine falcons and owls have been seen.

There are nearly three miles of heart-stopping paths, bridges and tunnels along Islandmagee’s magnificent Gobbins Cliffs. It will reopen in late June/early July after years of being in a state of disrepair.

Visitors will scale narrow, winding steps cut into the basalt cliffs, venture along precipitous walkways, and brave slender metal bridges. Some of these are over 30 metres in length and give giddying views of the sea below. 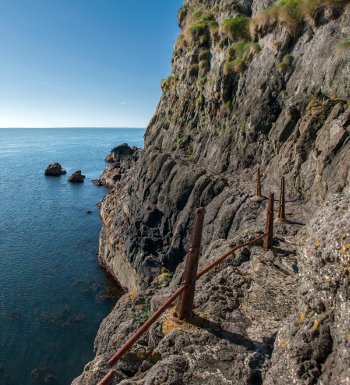 The Gobbins path before its renovation - it will reopen this summer. Picture courtesy of Tourism Ireland

Jump in your car and take five...