From the ghetto to mainstream city life: Boston's Irish emigrant experience at one with London

THEY used to go from the Blarney Stone to the Emerald Isle for a late drink.

There were thousands of Irish around Dorchester then, whole parishes removed from rocky Connemara and parachuted into South Boston.

They’d joke that you’d a better chance of hearing Irish spoken on Fields Corner than on Shop Street on Galway.

The community was tangible. You could reach out and touch it.

Connemara man Martin Conroy moved to Boston in the 1980s.

The Dorchester he walked into was a stroll of familiar faces where you couldn’t walk to the shops in Fields Corner without bumping into someone you knew from Ireland.

Eddie White is second generation Irish. He talks about where he grew up - Savin Hill - just off Dorchester Ave.

Savin Hill is a sweep of two and three story detached wooden houses.

It’s where the Boston Mayor Marty Walsh is from - the working class kid who cut his teeth in the unions and made it all the way to City Hall. 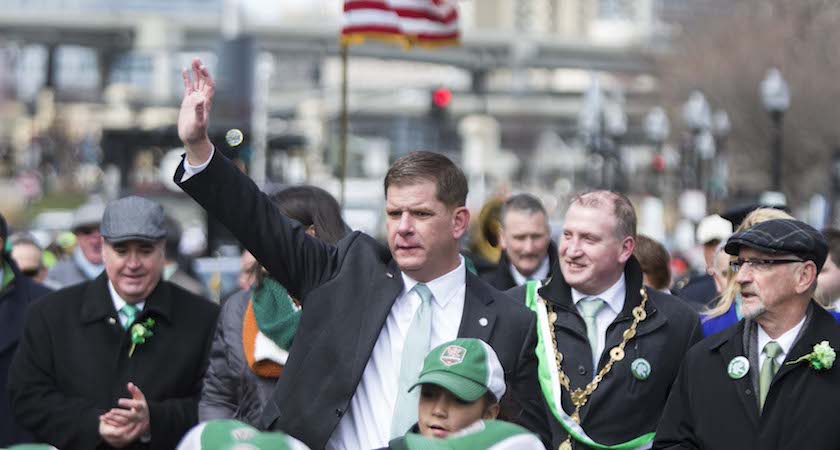 “It’s changed a lot around here,” says White. “Used to be all Irish one time. But now it’s a big Vietnamese area. You can see by all the stores.”

It’s 6am and traffic heading into Downtown Boston is light.

The truck makes a quick coffee stop in Dunkin Donuts and Eddie White waves a salute at an ‘Irish guy’ who crosses his path.

The journey continues inbound down the avenue past the Vietnamese stores and a couple of Irish bars bedecked with green trim.

The story of change in traditional Irish emigrant heartlands is a familiar one in hubs like Boston - and London.

The regeneration of migrants is no new social phenomenon but the timeline and the nature of change between embedded communities is uniquely similar from Dorchester to Cricklewood.

In both, an Irish demographic remains living alongside newer arrivals from Asia, and beyond.

Many will spend the rest of their days in their new country communicating in the native tongue of their home country.

Pockets of Irish in Boston are no exception. In the city centre a heavy iron door opens into the basement of a construction site where some of the longer serving labourers greet each other and fall into conversation in Irish.

Others, who have only recently arrived in the country, get to work on a job of work underpinning the building.

Stories from London about requiring a National Insurance number in order to get a start on a building site are met with genuine surprise by some of the older workers in the group.

Here there’s flex in the system, which means it’s still possible to get paid in cash.

The Irish are still coming to Boston but not enough to swell the demographic in Dorchester and its surrounds levels of times past.

Yet for many who arrive, high rent becomes an expensive fact of life, while often just trying to eat healthy is an expensive lifestyle choice in a retail landscape that can sometimes feel like an overflowing food isle.

Congressman Joe Kennedy III estimates that there may be more than 12million undocumented emigrants in the US and the Irish form a subset of this figure.

Yet like the sign on the Emerald Isle, they have faded into films, which pay homage to South Boston’s darker side.

The Irish have grown out of former ghettoes into the mainstream of city life.

The rise of the second generation is in some cases striking in terms of transition speed - Mayor Walsh a notable example.

Equally so, the endeavour and stoic nature of many of the more recent arrivals who are building lives and attempting to maintain responsibilities at home - on the back of cash jobs in bars, cafes and building sites.

Comparisons with London are different and at the same, strangely the same - the emigrant merry-go-round.