THE SURVIVING sister of Britain's so-called 'Guinness Twins' has shared a sweet throwback snap of her sister getting her weekly supply of her favourite drink.

Lil and Doris, once known as Britain's Oldest Twins, shot to viral stardom in 2019 after they appeared on TV shortly after their 95th birthday to declare that the secret to long life was "no sex and plenty of Guinness".

The pair captured the hearts of the nation with their witty banter and outright flirting with TV presenters, declaring their undying love for actor Jason Statham and being very vocal about their love for a pint of the Black Stuff, Guinness.

Both Lil and Doris caught Covid-19 in January this year, but at first appeared to be doing well, writing on Facebook that "We aren't ready [to go] yet ... we still haven't met Jason Statham!". 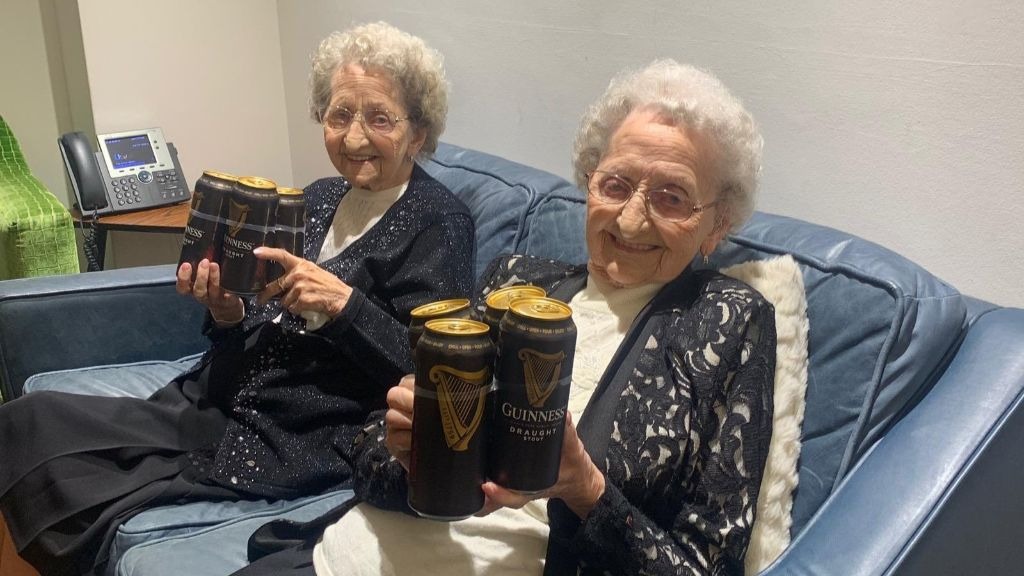 'Britain's Oldest Twins' left audiences in stitches with their quick wit and good humour as they made multiple TV appearances, including one where they announced the secret to their long life was "plenty of Guinness".

But tragically, on 5 January 2021, Doris passed away after fighting a battle with the virus, with her family writing that she was "still running fast but unfortunately had some hurdles put in her way and she wasn’t strong enough to fight Covid."

Her sister, Lil, was "devastated" without her sister, and the family waited until she was strong enough after recovering from the virus to tell her the heart-breaking news.

Now Lil is preparing to celebrate her 97th birthday-- her first one without her sister by her side.

A family member took to Facebook where they wrote it's going to be hard [for Lil] celebrating without Doris by her side.

"They have shared so many birthdays together and it still doesn’t seem right she won’t be here to share this amazing age."

They shared a sweet throwback picture of Doris, aged 96 but feeling fit as a fiddle, shopping in a supermarket, "where she went every Tuesday to get her weekly supply of Guinness".

"We hope she is going to be celebrating up there with her late husband Ray drinking her favourite drink."

Fans of the 'Guinness Twins' took to the comments section of the post to wish Doris a happy birthday, remember Doris and send support to the family, with one person urging them to "have a drink for Doris and I'm sure she will be watching over you, smiling.

"She knows she was and still is loved by all, she was a wonderful person."

Another wrote: "Don't worry Lily, you will have many with you to help you celebrate your birthday but also remember Doris and I wish I could be one of them be there but i will raise a glass to you both, along with many many others."