Heading for the capital? Here are eight Dublin hotspots you won't want to miss

It was still early on a Tuesday lunchtime, but already all the mahogany-lined and glass-fronted snugs were taken. The clientele was made up of office workers, a few Leinster House types, groups of businessmen here and there, plus a few visitors like ourselves.

We eventually found a free table tucked into a corner, overlooked by a huge Arthur Guinness mirror. The barman approached through the throng, multi-tasking on the way: cleaning tables, stacking empty glasses, dispensing racing tips to a snugful of construction workers, keeping his eye on the Guinness taps.

He arrived at our table with the lunchtime menu. “Jayz,” he said, “there has to be an easier way to make a thousand euro a week.”

As he wiped our table he announced the day’s special — Guinness pie “and chips so thick you could use ’em as draught excluders”. At €11 we could hardly say no.

Tucked along Baggot Street, Doheny & Nesbitt is somewhat away from the hen/stag trail, a short walk from St Stephen’s Green.

Dublin still has plenty of pubs like this — entirely absent of paddywhackeray but still full of craic and used by the locals. Doheny & Nesbitt’s is up there with The Palace on Dublin’s Fleet Street as one of the great bars of the world, in the same company as the Bull and Castle on Lord Edward Street, near Christ Church.

One of the first pubs in the world to sell draught Guinness, the Bull has really got the hang of it now. 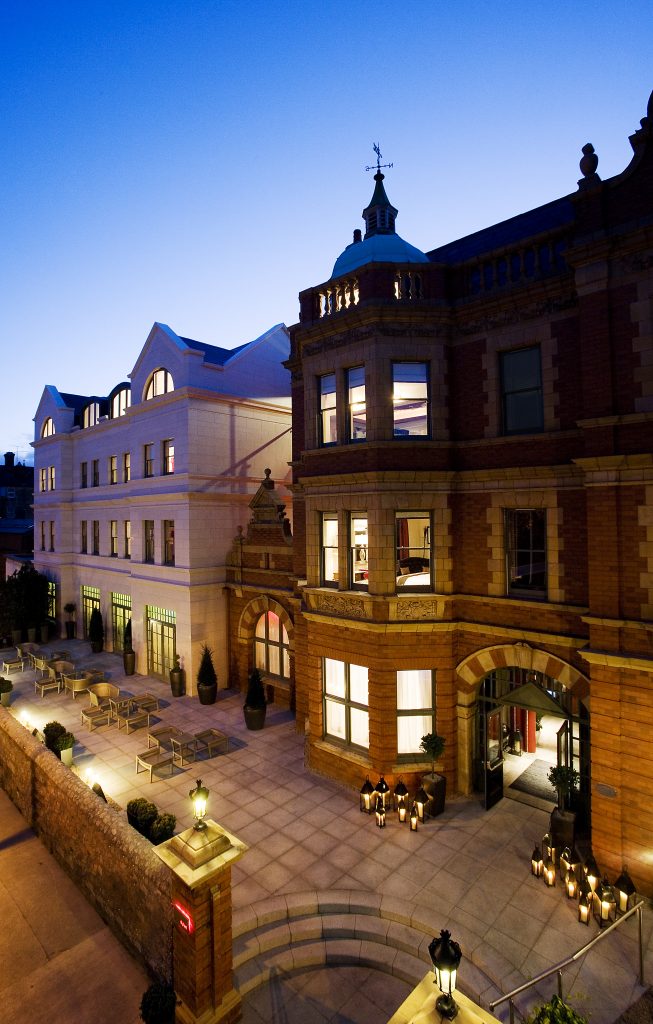 Handy for many of these establishments is The Dylan Hotel on Eastmoreland Lane in Dublin 4.

This is an elegant sweep of decadence in what was formerly a 19th-century townhouse housing the nurses of the nearby hospital.

It segued into the Hibernian Hotel for a few years, and has now been lavished with boutiquery.

Its rooms are sumptuous and equipped with all digital devilry, and downstairs is an inviting cocktail bar alongside its laid-back Tavern restaurant.

At breakfast, the ever-attentive staff ask you if you want a prosecco with your eggs Benedict. How can you say no?

The Dylan is a perfect base for setting out to explore the streets and squares of the city, and reacquaint yourself with Dublin of the old statues, of elegant Georgian boulevards, of cathedrals and museums — and of course atmospheric pubs.

The invader, the trader, the traveller, the settler, the rebel and the writer have all added colour and culture to this ancient place.

Few cities have produced so many heavy hitters in the literary field— Swift, Joyce, Shaw, Wilde, O'Casey, Beckett, Goldsmith. Plus the greatest horror-writer of them all, Bram Stoker.

Their ghosts lurk in every corner.

The world premiere of Handel’s Messiah was staged in Dublin, in 1742 in Neale's Great Musick Hall, Fishamble Street.

An unlikely site for the unveiling of one of western music’s big set pieces, you may think.

But back then Dublin was an intensely musical city – indeed many believe that the depth of Irish traditional music owes as much to this period of classical infusion as it does to Celtic influence.

Everything from rock to baroque is still available in the capital. But of course what Dublin is famous for – aside from U2, Thin Lizzy, Sinead O’Connor and Bob Geldof – is traditional music.

Concerts, workshops, festivals, fleadhs, and not forgetting endless pub sessions, are devoted to one of the finest expressions of folk culture in Europe.

Of particular note for this sort of thing is The Cobblestone, Tom Mulligan’s traditional Irish music bar and venue. Sessions, gigs, classes, talks, dances — you can expect them all at this establishment.

The essential character of Dublin, which has produced the likes of Edmund Burke, Dr Barnardo, Dracula, Francis Bacon, the Duke of Wellington and U2, has changed little in character over the year, despite the many superficial changes. It is in equal measure thoughtful and frivolous, decadent and pious, creative and convivial — undoubtedly one of the great cities of the world.

As I stumbled out of Madigan’s pub, I was momentarily disorientated. It must have been the prosecco at breakfast.

I stopped a be-suited, briefcase-carrying thirtysomething and asked him the way to the Gate Theatre (always worth checking out their programme).

We enjoyed a ten-minute conversation en route ranging from his job (he was a civil servant) to the redevelopment of Smithfield. It was a small vignette that, I suspect, might not have occurred in all that many cities in Europe.

But as we walked along the odd thing was that my civil servant friend was adamant, saying that Dublin just wasn't a friendly place any more.

I had to respectfully disagree with him.

Heading for the capital? Here are eight of Dublin’s most notable sights, that you won't want to miss...

Ireland’s oldest cathedral, Christ Church, was founded sometime after 1028 by King Sitric Silkbeard, the Hiberno-Norse king of Dublin. It was a Viking wooden affair, so a complete rebuilding was commissioned in 1172 by Norman overlord Strongbow, aided by Archbishop Laurence O’Toole, Dublin’s patron saint — both of whose remains lie in the Cathedral.

A short stroll from Christ Church is St Patrick's Cathedral. The patron saint baptised converts to Christianity in the grounds of the cathedral with water from a local well. Since then (5th century) a church has stood on the grounds.

The Normans built a substantial edifice in the 12th century, the core of today’s cathedral. Highlights include the tomb of Jonathan Swift, if a tombstone can ever be regarded as a highlight. No matter, he was dean here in the 18th century, and has a suitably impressive epitaph:

Here is laid the body of Jonathan Swift, Doctor of Divinity,

Dean of this cathedral Church, / Where fierce indignation can no longer

Rend his heart / Go, traveller, and imitate if you can

This earnest and dedicated Champion of Liberty

Nearby Swift's tomb is a wooden door through which the Earl of Ormond and the Earl of Kildare shook hands ending a feud in 1492 — said to be the origin of the phrase 'chancing your arm'.

Stout work at the Storehouse

No trip to Dublin would be complete without a visit to the Guinness Storehouse at St James’s Gate. Dubs initially turned their noses up at the drink when it first came on the market in the mid 18th century — because of Arthur Guinness’s opposition to the United Irishmen (politics are never far away).

However the attractions of the new drink soon overcame political considerations. Up the rebels, and down the hatch.

You can see where Sir Arthur’s brewing process began in the former fermentation plant, helpfully remodelled in the shape of a giant pint glass.

The secrets of stout, how roast barley gives Guinness its deep ruby colour, and how a perfect pint is pulled are gone into in some detail.

The tour ends in the Gravity Bar – a drinking establishment with a 360 degree panoramic view across the city, and the perfect place to contemplate Ireland’s capital, have a few more pints, ponder the meaning of life, have a few more pints, discuss with your friends whether this is the best day you've ever had in your life, and so on.

A cup of coffee

Even during the bleak times when just about the only non-alcoholic beverage available in Ireland was tea, Bewleys was busy serving a fine cup of that very exotic brew, coffee. The grand old dame of Dublin cafés was founded by the Quaker Bewley family in the early 20th century, and soon established itself as a hub of literary, cultural, artistic and social life in Dublin. Those known to have partaken of a coffee and sticky bun here include James Joyce, Patrick Kavanagh, Edna O’Brien, Maeve Binchy, Samuel Beckett and Sean O’Casey. Today it’s still an atmospheric slice of old Dublin.

With its heritage, class and great location just off Grafton Street, the fabulous Georgian palazzo of Powerscourt Townhouse has been converted into a galleried shopping and snacking extravaganza. Packed with shops where you can load up with some decent spoils, the centre also features cafes ideal for sitting back and people-watching till your heart’s content.

Ireland’s first honorary citizen, Chester Beatty insisted on “quality, quality - always the quality.” It’s a formula which has guaranteed that his library has one of the most significant collections in Europe. Dazzling collections of books, manuscripts, prints and objets d’art from round the world are available for viewing – for free. It costs time and money to see the Book of Kells in Trinity, but the CBL’s collection of illuminated sacred manuscripts are right up there – with no queue.

Arguably, the 2nd most popular saint of all, St Valentine (running St Nicholas a close second), takes his eternal rest in the Carmelite church on Aungier Street. You can pay your respects to the patron saint of chocolates and roses, even if he wasn't Irish — it's doubtful if Guinness ever passed his lips. However, his remains were brought to Dublin in 1835 by one Father John Spratt, donated to him by a grateful Pope. The church, given it commercial potential, is admirably understated. This is old Dublin, the Ireland of Madonnas, novenas and the Angelus.

The gracious proportions of the historical General Post Office dominate the northern part of O’Connell Street just beyond the bridge. The GPO is one of the architectural gems of Dublin, but its historical significance is equally fascinating — this is where the Proclamation was read out at the beginning of the Easter Rising (you can still see bullet holes in the columns outside)

As well as dealing with seismic events of  1916, the GPO also deals in the minutiae of Irish history — situated in one corner is the An Post Museum housing the exhibition Letters, Lives & Liberty. This small but fascinating museum examines the influence of the Post Office in Ireland — it affected everything from emigration to Irish traditional music.

But despite the presence of poets, priests and singers, the most visited grave is, by a long chalk, that of Michael Collins. His simple Celtic cross is covered in bunches of flowers, It’s mostly women who leave the flowers; some even visit every week, and leave notes, even Valentine cards. This has been going on even before the film Michael Collins came out, but of course it added to the allure.  Since then the office at Glasnevin has had people asking: "Where is Julia Roberts buried?" - meaning Kitty Kiernan. Collins's fiancée died in 1945 and is buried near his grave.

Before you leave Glasnevin, pay your respects to 11-year-old Michael Casey of Francis Street, who died of consumption on February 22nd, 1832. He became the very first person of the 1,200,000 — of a great many denominations and nationalities — to be buried in Glasnevin.

Mal Rogers stayed at the Dylan Hotel. He travelled by Stena Line, Holyhead to Dublin.