NO Irish, no blacks, no dogs.

Those menacing six words are a stark, unapologetically racist expression of the xenophobia many immigrant communities in Britain faced after World War Two – but was it a myth?

It’s often assumed that signs proudly bearing the slogan were commonplace in shop-windows decades ago – but how true are those assumptions?

The only known photograph of such a placard is held by the Irish Studies Centre of London Metropolitan University.

The notorious image depicts a B&B’s front window with signs saying 'Bed & breakfast' and 'No Irish, no blacks, no dogs'.

But in a letter published in the Guardian in 2015, John Draper contended that the photograph may have been a fake.

Draper wrote: “The photograph emerged only in the late 1980s, and the university has conceded to me that it is of ‘somewhat uncertain’ provenance. They have been unable to discover who took the picture, where or when.

“An old news clipping which I have presented to the university points to the image having been mocked up for an exhibition called “An Irish Experience” mounted at the now-defunct Roger Casement Irish Centre in Islington, London.

“This dubious picture has long been cited by politicians, academics, even the Equality and Human Rights Commission, all of whom no doubt believe it is genuine”. 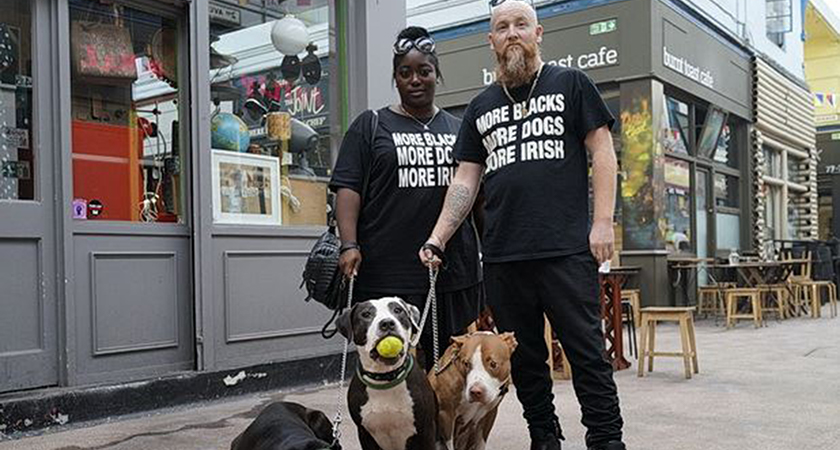 More blacks, more dogs, more Irish: The slogan has been reclaimed in the UK in recent years.

He added: “Many even claim to have seen such signs in the past, though what they may actually remember is the London Met picture endlessly recirculated, nowadays on the internet.”

Such claims should certainly be treated with a sprinkle or two of caution.

In the US, the slogan ‘No Irish need apply’ – often referred to as ‘NINA’ – has achieved similar infamy as a symbol of racist attitudes towards Irish immigrants.

Then in 2002, historian Richard Jensen published an attempted takedown of ‘NINA’ in his contentious paper ‘A Myth of Victimization’.

Jensen argued that anti-Irish job discrimination was not a significant problem in US history, and that ‘NINA’ signs were posted by a small minority of 19th-century English immigrants who brought the prejudices of their homeland across the Atlantic.

However, Jensen’s claims have largely been discredited in recent years, especially after Rebecca Fried – an 8th grade student from Washington DC – published an academic article beyond her years providing multiple examples of ‘NINA’ signs in newspaper archives.

Back in the UK, debatable claims that ‘No Irish, no blacks, no dogs’ signs were a myth have grown in number in recent years, albeit among a small minority of critics.

Arguably the best rebuttal of the ‘No proof’ theory came from Dr Tony Murray, director of the Irish Studies Centre at London Metropolitan University.

In a reply to John Draper’s letter in the Guardian, Dr Murray shot back at his claim that the much-reproduced ‘No Irish…’ photograph “emerged only in the late 1980s”.

He explained that although the picture was donated to his university in 1989, by the Irish in Britain History Group, there is “no reason to doubt” its authenticity. 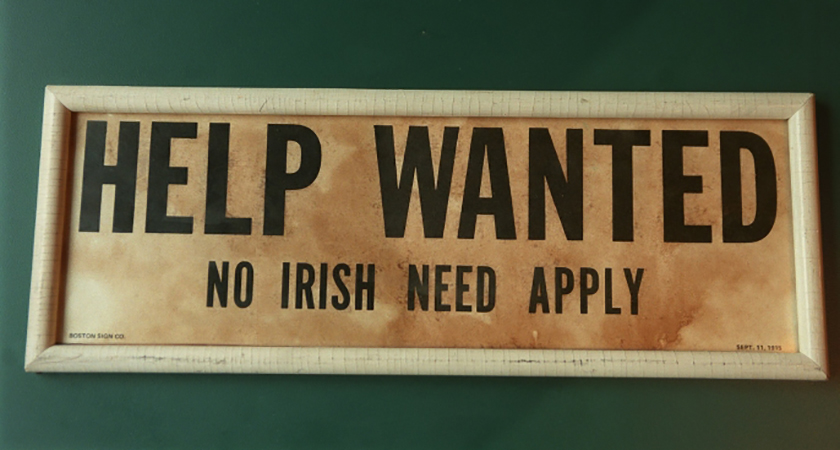 An example of an anti-Irish 'NINA' sign from the United States.

And he's right – Draper’s paper-thin claim that the photograph was faked is based merely on the fact it was donated decades after it was taken.

As Dr Murray explained: “With community ventures of this kind, such items are not always formally acquisitioned and their provenance not always recorded.

“We had no reason to doubt the authenticity of the image and that the archive had received it in good faith.

“Mr Draper appears to be confusing authenticity with provenance. Numerous artefacts with minimal provenance are held in archives but this does not necessarily mean they are not genuine.

“[Draper] claims the photograph was ‘mocked up’ for the exhibition An Irish Experience. But this took place in the mid-90s, a decade after the original photograph was donated”.

He added: “I’m puzzled by what exactly Mr Draper is trying to prove. Ample evidence exists in numerous oral history interviews with both Caribbean and Irish migrants that such signs existed well into the 60s.

“Further proof can be found in the report Discrimination and the Irish Community in Britain published by the Commission for Racial Equality in 1997.

“It seems mischievous at best and malicious at worst on John Draper’s part to suggest that this photograph is a fraud and by implication that Irish people in Britain were not discriminated against in the post-war era.”

And discriminated against, they certainly were. That is not up for debate – especially not for the many thousands of Irish men and women who crossed the sea to Britain in the aftermath of the Second World War.

So there you have it – the infamous ‘No Irish, no blacks, no dogs’ signs almost certainly existed.

But even if – for argument’s sake – it was all a myth, those menacing six words encapsulated the lived experiences of an entire generation of outsiders who made Britain their home. And that perseverance meant something.