AN IRISHMAN'S rare Irish ten shilling note collection, which took over 40 years to stockpile, is to be sold in London.

Co. Tyrone native Tony Lenny, who died in 2013, spent four decades searching for rarities such as a note dated September 10, 1928, which is expected to fetch up to £800 when it is auctioned by Dix Noonan Webb.

"Tony knew and maintained contact with collectors and dealers all over the world, sharing ideas and relentlessly trying to improve his collections,” said his son David Lenny.

“His approach to collecting was to first search for dates in his collections that he was missing, with additional attention to serial numbers that appealed to him, then subsequently scouring the globe to acquire examples in better condition, always fine tuning his collection."

According to the family, The Lenny Collection is the most comprehensive private collection of Irish Ten Shilling notes ever assembled.

Mr Lenny, who lived in Wicklow, acquired 230 of the 231 dates on which Irish ten shilling notes were issued.

David Lenny added: “He spent over 40 years improving this Irish ten shilling notes collection, which he considered his finest and most comprehensive set, acquiring the best condition notes he could of 230 of the 231 dates issued.

"Opinion differs over whether the one exception, 15 May 1945, actually exists or not.”

Some of the notes in the collection are the only known examples of a particular date or prefix.

They also include rare notes from the 1920s and 1930s and another from the early 1940s, which are all stamped with single code letters as a wartime security measure. 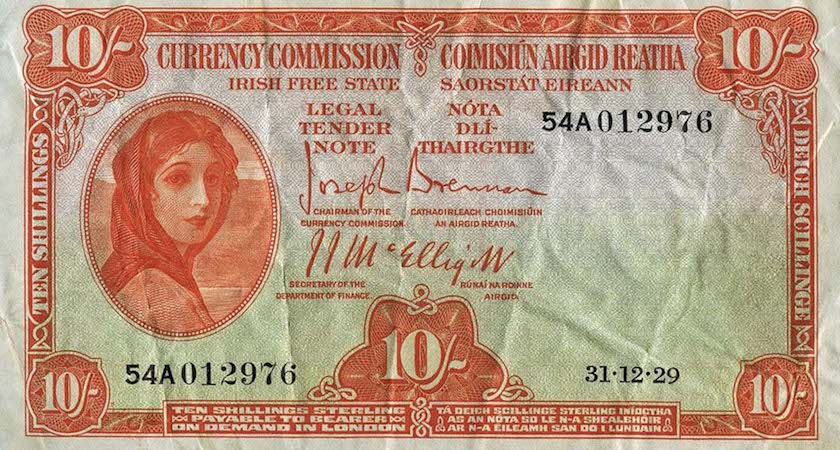 One of the rare Ten Shilling notes

Tony Lenny was born in 1924 in Cookstown, Co. Tyrone, where he spent his childhood.

He moved to the Dublin area to attend college, where he met his wife Dympna, and during his career worked as an executive at the Irish Grain Board and at R. & H. Hall, Ireland’s largest importer and supplier of grains and cereals.

The couple moved to Bray, Co. Wicklow, where they raised five children and ran a wool shop.

Tony loved horse racing and he opened two betting offices, one in Bray and the other in central Dublin.

But it is as a hugely knowledgeable collector that many will remember him.

He collaborated with well-known members of the Irish numismatic community and authors such as Derek Young and Martan MacDevitt.

In later life he and Dympna moved to Wicklow town where he died in 2013 aged 88.

The Lenny Collection is among 78 lots being auctioned in two parts by Dix Noonan Webb in London on September 25.