MY PARENTS, quite sensibly, told me I couldn’t smoke until I was 18, so on my 18th birthday I sparked up almost as soon as I left the house.

Like most families we couldn’t afford a Super Nintendo so I went out and bought one with my first pay cheque ten years later.

Today I’m very careful what I deny my son because I know the impact. If he’s anything like me, whatever he can’t have will be exactly what he wants.

Sneakers (Nike Air Jordan sneakers specifically) were one thing I could not have. The reasons were obvious. First of all, between the ages of seven and 12, my feet were growing at an absurd, almost freakish rate.

Secondly Air Jordan shoes cost about £1,000, or at least that was what it felt like. Besides ‘the runners in Dunnes Stores are perfectly good,’ my mother never tired of saying.

The Air Jordan sneakers that I and so many other young Irish lads craved were so far out of reach they felt like sports cars. We’d buy magazines just to look at pictures of them. We’d spend hours gazing through glass at them.

Occasionally you’d see them pass in the street and you’d shake your head. The end result of this? I am now obsessed in an unhealthy way with obtaining all the sneakers I was ever denied as a child with freakishly big feet. And there are millions the world over just like me — but with smaller feet. 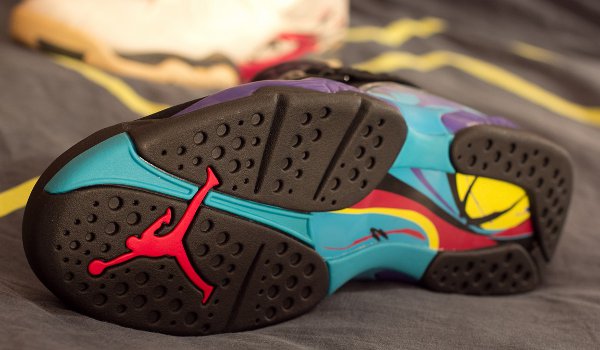 I don’t know if Nike knew that this is what they were creating at the time but they certainly know it now. There were a lot of things I couldn’t explain to my Mom back in 1991 not least the fact that Dunnes Stores produced terrible shoes.

When compared to the space age technology in every pair of Air Jordans you may as well have bought a pair of wooden clogs as buy the Dunnes own brand, Striders. The thing most parents couldn’t comprehend was the idea that if we missed the opportunity to buy these sneakers in 1991, we were missing out on them forever.

When Michael Jordan was dominating the NBA while appearing to fly through the air like a superhero, most of us, if not all basketball fans, knew that we were watching our Muhammad Ali.

Owning these shoes was the equivalent of owning Ali’s gloves or Babe Ruth’s bat. It wasn’t just about “being comfy” as our Mums put it — it was about owning a piece of history. If we didn’t get these shoes now, they’d be gone forever.

Twenty years later, when Nike had the brainwave to reproduce and put those vintage shoes back on sale, they sold faster than the originals. It was mind blowing to have a chance to buy the thing you were told you’d never have. People like me lined up in the streets with our disposable income and the obsession began.

In the past I couldn’t admit it. I am obsessed with sneakers. Here are my confessions:

1. I am ashamed to admit that the smell of new sneakers is my favourite smell in the world.

3. I have more pairs in boxes than I actively wear.

4. I make character judgements of people based on their sneakers.

5. I secretly think that at least one of my pairs will be worth enough to retire on.

6. I am embarrassed to admit how much I have spent on them in the last 10 years.

7. I’ve hidden sneakers I have bought from my wife.

8. I’m trying and failing to convince my toddler son that he likes sneakers too.

9. I’m trying to convince myself he will wear the shoes I don’t wear now.

10. Even as I write this there is a small part of me that thinks that maybe, someday, Nike will send me Air Jordans as part of some kind of comedian shoe endorsement deal.

If you are reading this and you have a sneaker obsession with one or more pairs of sneakers you can get help. There are communities of sneakerheads, support groups and conventions.

Whatever the shoes you missed out on as a child you can find them. Someone, somewhere is selling them on eBay in your size, unless it’s a pair of Striders from Dunnes Stores you’re looking for. Those things are priceless now.