W.B. Yeats, A series of unpublished letters went under the hammer on December 8

A SERIES of letters written by a young William Butler Yeats to his friend Ethel Veasey sold for nearly £50,000 when they went up for auction for the first time this week.

The seven unpublished letters were written by Yeats between 1883 and 1885, the earliest being penned by the Irishman, who would go on to become one of his country’s greatest poets, when he was just 18.

They were released for auction for the first time by the family of the recipient, who was the elder sister of Harley Cyril Veasey, Yeats’ close friend at Godolphin School in London.

Ethel and William also became friends and kept up a correspondence even after the Yeats family returned to Ireland in 1880.

Their tender letters reveal the private thoughts of the teenage poet, revealing the ways in which he navigated these crucial early years.

Not only do they provide a precious glimpse into the nascent stages of Yeats' career, they also offer a fascinating record of the key figures on the Dublin literary scene at that time.

The earliest letter contains two whimsical pen and ink sketches (one featuring an encounter between Cyril Veasey and a tiger, the other showing four hunters shooting at a single duck and captioned "game is scarce"). 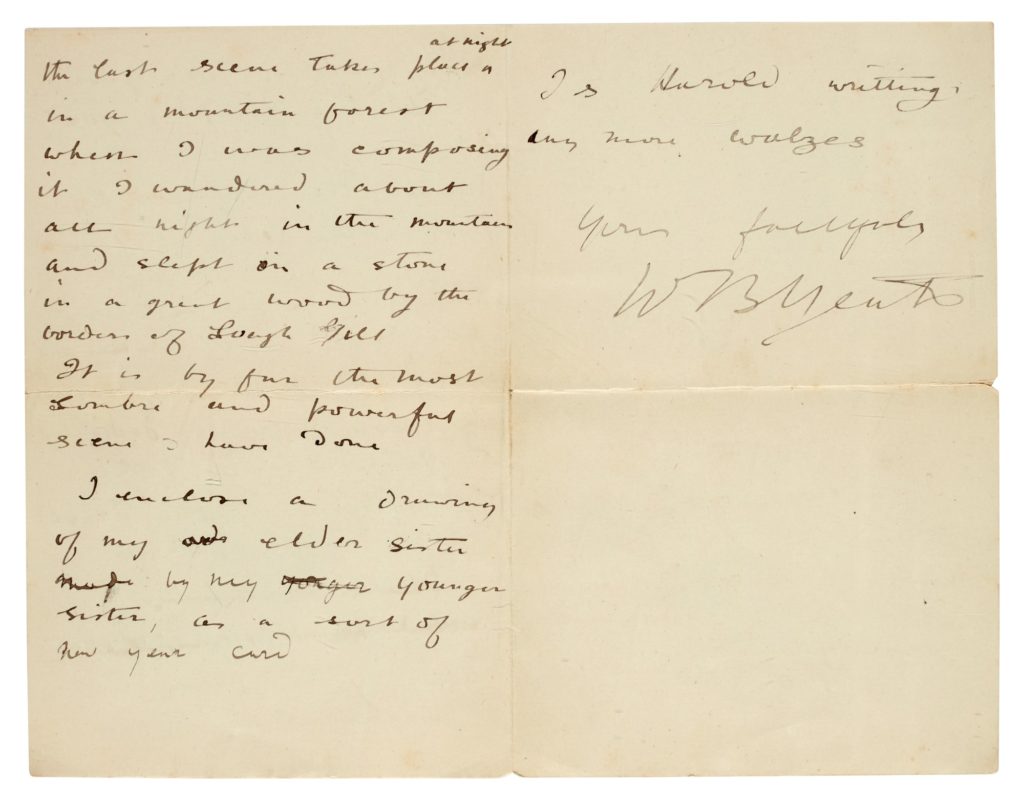 One of the letters in the expensive bundle by WB Yeats

He also responds to a question from Ethel about his writing, admitting that he is writing poetry but "none that I am at all satisfied with".

Later letters update Ethel on his latest works, including ‘The Island of Many Flowers’ and ‘Time and the Witch Vivien’, as well as his excitement at the appearance of his first poems in Dublin's literary magazines.

Yet in September 1885 he writes of his literary ambitions and fears that he will not fulfil his potential, stating: "I am so much given to celtic brooding and dreamy indolence.”

As well as documenting Yeats’ early works, the letters also provide insight into the poet’s changing circumstances in Dublin.

"Our new house is better than our old one but dull, from my Howth window I had a view of a wide sea and much heather and at times could say 'there goes a grey gull - Let verse be as spontaneous as the flight of a grey full over the bay',” he writes.

“But here from my window I see a straight wall and by much stretching round the corner, the glimpse of a bush very dim and dusty - a lamentable view for a maker of verses."

By the following year his enthusiasm shifts to his new friends and connections in the city, including the poet Katharine Tynan, C.H. Oldham, the editor of the Dublin Literary Review, and former President of the Irish Republican Brotherhood John O’Leary.

The letters went under the hammer on December 8 in Sotheby’s London’s online auction English Literature, History, Science, Children’s Books and Illustrations with an estimate of £12,000 - £18,000.