THE names and remarkable lives of a group of set dancers captured by camera at a crossroads in Ireland over 100 years ago have been revealed thanks to the evidence of a 91-year-old man shortly before he died.

The photo is regularly spotted in bars, restaurants and private homes across Ireland and has become symbolic of how rural communities celebrated life in the ‘old’ Ireland of the time.

For all that, very little has been known about those who feature in the photo, while various counties have laid claim to its location.

The testimony reveals a family and a community of staunch republicans some of whom would later participate actively in Dublin’s Easter Rising.

Two of the dancers also participated in Ireland’s first ever official camogie match.

Scroll down to see the names of those in the picture above...

Retired CIE worker Manus O’Brien, who passed away in 2016, divulged the identities of over half the figures in the picture while conversing with his relations Jim O’Malley and Richard Pardi, both of whom are retired school teachers.

The Corkman pointed out his own mother Abina, (Gobnait) as a young girl in the photograph.

Manus confirmed that the photo was taken at his birthplace, Knockmonlea, midway between Youghal and Killeagh in east Cork.

The landscape remains almost unchanged to this day, though in truth it is more of a junction than a crossroads.

Manus’s information enabled his relatives, assisted by Knockmonlea resident Billy McCarthy, to align several of the dancers with nationalist organisations and active roles in the Easter Rising.

The photograph was taken by the renowned Horgan brothers of Youghal, pioneers of film and photography at the time the photo was taken, circa 1910.

Peg Barry, (nee Foley) another relative and now a sprightly nonagenarian, recalls Knockmonlea as a bustling community with a forge and other small businesses in the early 1900’s.

“Dances were held at the crossroads on Sunday afternoons during summertime”, she recalls.

Although Manus didn’t allude to it, Jim believes the scene “was deliberately posed, given the absence of a wooden platform as would be prerequisite for a real dance.”

The photo is dominated by the Foley family, of whom Manus identified eight.

They were a family of 13 born to Margaret (Peg, nee Long) and her husband Richard, who had died, aged 80 some months earlier.

One son, thought believed not in the photo, was Risteard Ó Foghlú, a renowned journalist, author and prominent Gaelic League member. Risteard reported on Parnell’s final public speech for the Freeman’s Journal in 1891 and was a translator for the first Dáil.

In a full life, Risteard also served as a manager with the Underwood Typewriting Company, co-founded the Dublin Institute of Shorthand Writers, translated Chekov and Tolstoy into Gaelic and was appointed Place Names Commissioner by de Valera in 1946.

The Foleys deeply resented British occupation possibly having been evicted from the Ponsonby Estate in 1889 during the Land Wars.

Various family members were active in the Republican Brotherhood, the Irish Volunteers and Cuman na mBan.

The family ran the Foley Typewriting Trading Company in Dublin and the offices were used as a pre-Rising meeting place by the rebels.

“Another brother, Seán, was an inspector in a Birmingham ammunitions factory of all things and smuggled arms out to the rebels for the uprising," Jim relates.

Those identified in the photo include Margaret (Peg) Foley, mother of all the Foleys.

Her daughter Abina married John O’Brien from Gortroe. Their son Seán played hurling with Glen Rovers and won three All-Irelands with Cork (1952-54), captaining the team in 1952.

Michael Foley was a founder member of the Manchester branch of Conradh na Gaelige.

He was held at gunpoint by a British colonel during the Rising but was saved when Capuchin Fr. Aloysius persuaded volunteers to honour a ceasefire.

He also introduced British double agent and Castle spy Ned Broy to Michael Collins. Following a period on the run, he was jailed briefly in England.

Bríd (Brighid) Foley was very involved in Cumann na mBan and spoke of “carrying rifles from house to house” before and after the Rising.

Along with siblings Cáit, Nora and Micheal she dodged bullets to carry messages and help the injured during Easter week.

Later arrested at home, she slept on Kilmainham jail’s concrete floor for 11 nights before serving six weeks in Mountjoy.

Bríd and her sister Maggie played for Craobh an Chéitinnigh against Cuchalainn’s in the first official camogie match, in Navan on July 17 1904.

Cáit Foley later married Pad Murphy, whose hand she is holding in the photo. Their daughters Ita and Ann still live in the area.

Maggie Mountaine was a neighbour who moved in ‘temporarily’ with the Foley’s when the Black & Tans burned down her family home. However she stayed there for rest of her life.

Jerry Curtin, a shoemaker, allegedly worked from his bedroom and, it is said, had a penchant for knitting.

Maurice Hennessy was a carpenter whose workshop stands at the bottom left of the photo. He is probably sitting on a chair he made himself.

See below for who's who in the Dancing at the Crossroads picture... 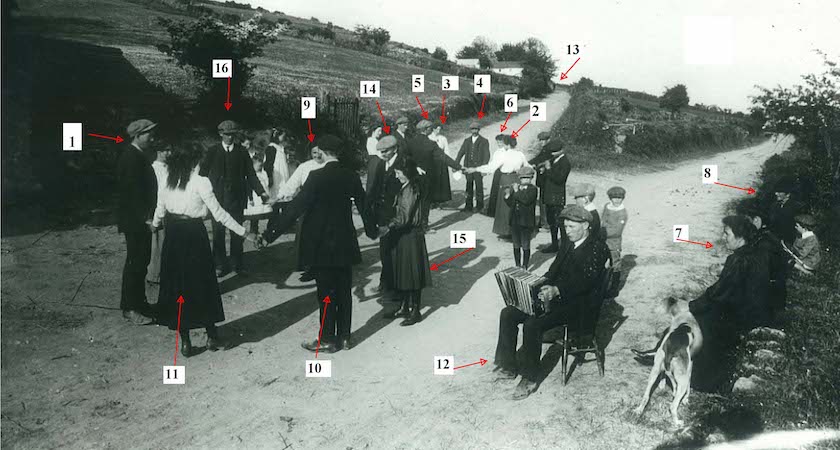 Do you know any of the others pictured in this photo? If so get in touch by emailing [email protected]