ON THIS day in 1989, four people were freed from prison after 15 years, cleared of a crime they did not commit.

On 5 October 1974, two IRA bombs were detonated in the Horse and Groom pub in Guildford, England, a popular drinking spot for British Army personnel.

Four soldiers and one civilian were killed in the explosion; a further 65 people were wounded.

The British police were under pressure to make an arrest-- and they did so.

Gerry Conlon, Paul Hill, Patrick Armstrong and Carole Richardson were framed and forced into confessing to the attacks; their confessions came under extreme duress and even torture from British police.

Gerry Conlon had been staying at his aunt's house in London at the time of the bombings, but rather than work as an alibi, Conlon's aunt Annie Maguire, his father Patrick 'Giuseppe' Conlon and five other members of the family were charged with providing bomb-making material and support to the bombers. 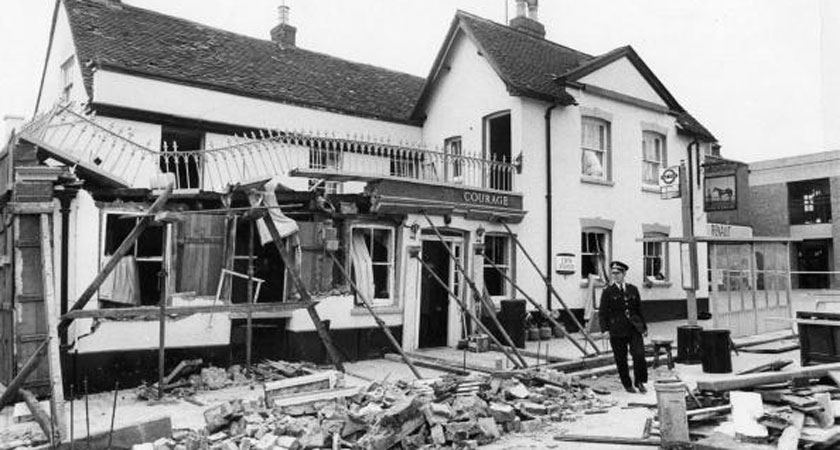 The Horse & Groom pub in Guildford after it was bombed by the IRA (Image: Getty)

Each of them were sentenced to between 4 and 14 years in prison for their alleged role in the killings-- Giuseppe passed away in the third year of his unjust incarceration.

The Guildford four, meanwhile, were sentenced to life.

“Because a year after we were inside in prison, the [IRA] Balcombe Street Gang got arrested, and they told the police, ‘we did Guildford, who you have innocent people in prison for’. We went on an appeal to give evidence. And in the end, the judge just said ‘no you were all in this together’.”

Each of them swore innocence throughout their incarceration, until eventually, after 15 years, an appeal found that their confessions were obtained by torture, and investigating police were aware of evidence which completely cleared their name-- but they did not bring that evidence forward.

Conlon famously stormed out of the court room, using his newfound freedom to declare:

"I watched my father die in a British prison for something he didn't do.

"He is innocent, the Maguires are innocent, let's hope the Birmingham Six are next to be freed."

Despite the evidence clearing their names, however, it would be a further 26 years before they received an official apology.

In 2005, then-Prime Minister Tony Blair said sorry to the Guildford Four and the and Maguire Seven-- including the late Giuseppe Conlon, who spent the last years of his life imprisoned for the crimes he did not commit.

The 1993 film In The Name of the Father, from Irish director Jim Sheridan, explored the horrific injustice faced by the two families, based on Conlon's own memoir Proved Innocent.

See More: Guildford Four, History, On This Day, The Troubles