THE sound of flowing spring water is the first thing you will notice as you near Saint Patrick’s Well in Marlfield, Clonmel, Co. Tipperary.

St Patrick’s Well, or Tobar Phadraig, reads the sign at the entrance gate - which in turn leads the visitor on a magical, winding sixty-three step walk down past a limestone rock cliff ending at the statue of St Patrick, erected in 1956.

The vantage point at the top of the steps is so inviting that it stops people in their tracks encouraging them take in the panoramic view of one of Ireland’s largest wells, devoted to the nation’s patron saint.

St Patrick’s Well has been a place of worship for thousands of years and it can trace its origins back to pre-Christian times.

The Well has been a place of pilgrimage and devotion in the Christian era ever since, Patrick himself – it is said - converted the locals to Christianity.

This fact is not beyond the realms of speculation as Patrick had converted the King of Munster to Christianity, only up the road in Cashel.

The Well resides in a beautiful tree covered glen and the first noticeable feature, apart from the church, is a stone cross standing out in the large pond, which is enclosed by a wall.

This cross dates from the fifth century and sits on an island of stone.

The church in its present form dates from the fifteenth century.

It has a Romanesque architectural appearance and was attached to the nearby Cistercian Abbey of Inishlounaght, which was said to have survived until Oliver Cromwell arrived in 1650, after which it fell into disrepair.

Inside the church we see an altar which was the tomb of Nicholas White, who died in 1622 and whose family had moved it there in 1805, and so it is known as the ‘White altar’. 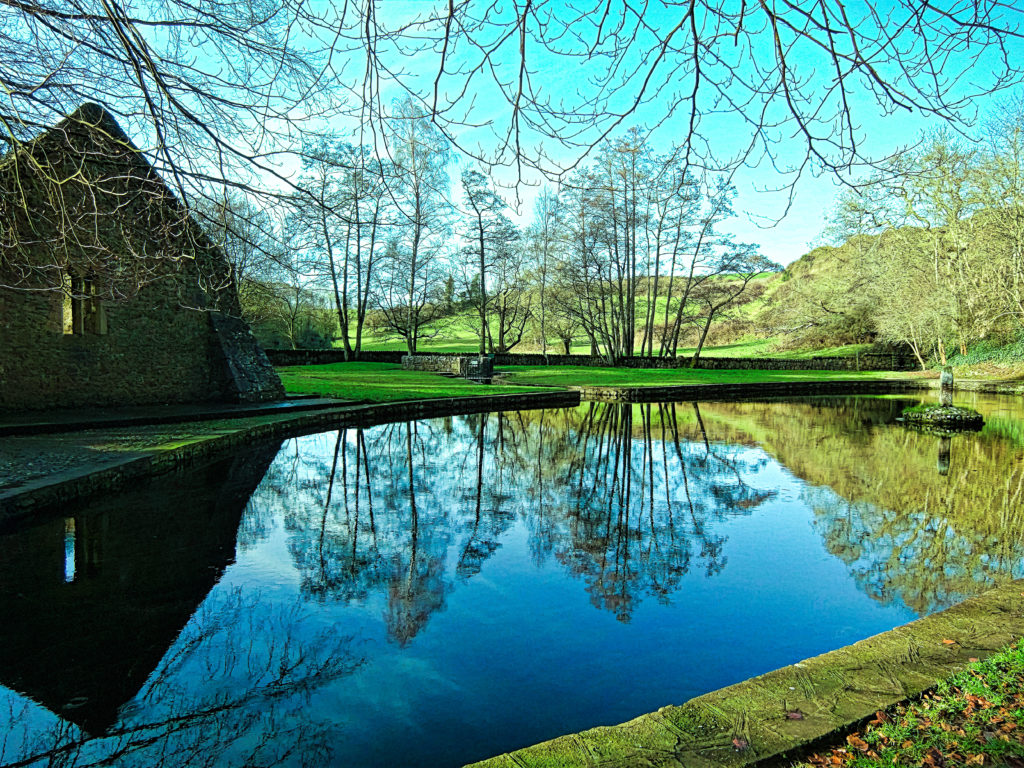 The roaring spring is the central attraction of this magnificent place and for many these waters are famed for their curative properties.

Two granite waterspouts or flumes funnel the bubbling spring into the pond from a deep underground spring.

Numerous cures are accredited to the Well’s waters, as for thousands of years people have come to the Well to seek relief from their suffering.

John Donovan wrote in 1840: “it is still esteemed holy and visited far and near for the cure of diseases, especially headaches.”

Many other ailments are said to benefit from the Well waters and a traveller writing in 1813 remarked: “An excellent mineral spring and a Well which is celebrated for curing sore lips, sore eyes, the scrofula (TB of the neck) and several chronic diseases either by drinking or washing in the stream…thousands flock here in summertime form all places.”

Over the centuries the site fell into disrepair until a fortuitous set of circumstances lead to the transformation of the old Well into its present picturesque form.

It happened that the Mayor of Los Angeles, Sam Yorty’s mother had been born in Clonmel and she had on numerous occasions remarked to Sam about her fond memories of visiting StPatrick’s Well. So, in the 1960s the local Saint Patrick’s Day Society, aided by financial assistance from Mayor Sam Yorty; The Irish Israeli Society of South California and the businessman Mr Armand Hammer, set about transforming the historical site into its marvellous present appearance.

One marvels at the journey Patrick made from Cashel to Lismore and his arrival in Marlfield along the way.

At the time of Patrick’s arrival in the fifth century the site was sparse, all that would be viewed at the time was an ancient ash tree and a bubbling spring, but it was enough for the great man to set about his work at baptising the locals.

Today, St Patrick’s Well is one of Clonmel’s most popular amenities.

People of all faiths and none enjoy the beauty and tranquillity of the place.

Some come to fill their water bottles with the healing waters while others bathe their weary feet in the cooling pond waters.

For thousands of years pilgrims and pagans alike have been drawn to the magical qualities of this amphitheatre of tranquillity and let us hope that this will continue for generations to come.

I wish to dedicate this article to David Flannery, who is known as the ‘Guardian or Well-Keeper’ of St Patrick’s Well and is a man who has devoted a lifetime to the upkeep and care of this sacred site.

David asks for no reward, material or otherwise.