AN IRISH academic was joined live by the commander of the International Space Station for a Russian poetry seminar quite unlike any other.

Dr Shane O’Rourke, from the Department of History at the University of York, said the experience was “mind-blowing” as Russian cosmonaut Commander Sergey Ryzhikov linked up live on zoom with him and read poetry in Russian.

The session was part of a series of seminars with the Pushkin Institute in Moscow to which Dr O'Rourke had been invited.

As the ISS sped round the earth at more than 17,000 mph, the two poetry experts discussed the work of Russian 19th century Romantic poet, Mikhail Lermontov.

Dr O'Rourke told The Irish Post: “I got involved in this event through a friend, Professor Afanaseva, in the Pushkin Institute in Moscow who asked me to speak on the Scottish roots of the Russian writer Mikhail Lermontov.

“What was really unusual about this was the link-up with the International Space Station. About 20 minutes into the video the commander of the Station, Cosmonaut Sergei Ryzhivkov, appeared and read some of the poetry of Lermontov. It was amazing when he suddenly materialised during the seminar. We could see into the Space Station — everything was as clear as day.

“The theme was poetry and the cosmos hence the link, but this really was something very special. The sound was great and everything worked perfectly – in fact much better than some seminars I’ve held with people on Earth. We were connected apparently while the space station was flying over South America. It was a pretty mind-blowing experience.” 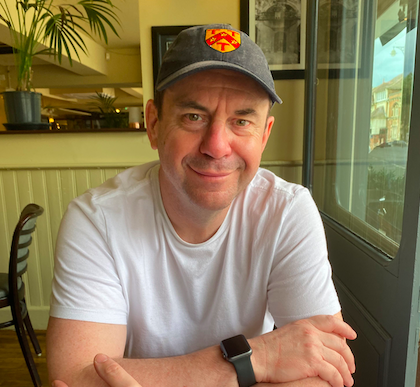 Dr Shane O'Rourke, of the University of York, whose parents hail from counties Leitrim and Tipperary

The lecturers were connected to the International Space Station for about 20 minutes.

Dr O’Rourke added: “With the commander being on camera it gave us an incredible opportunity to see into the space station. It did look quite cramped in there and they were floating around a little at times.”

Dr O’Rourke is a senior lecturer at the University of York.

He told The Irish post: “My dad is from Ballinamore in county Leitrim and my mum is from Cashel in Co. Tipperary. They live in Blackheath

“I was born and grew up in south-east London, along with my sister and brother part of the Irish Diaspora. We’ve been going to Ireland all our lives so have very strong and close connections with Ireland.”

Dr O’Rourke began his career as a historian of Imperial and Soviet Russia, looking at the history of the Cossacks in particular.

He has produced two books on the Cossacks and numerous articles, covering the Cossacks from Muscovite times into the post-Soviet period.

Over the past four years Dr O’Rourke began developing an interest in the history of Brazil and is now engaged on a major research project comparing the emancipation of the serfs in Russia in 1861 and the slaves in Brazil in 1888.

Brazil is also figuring increasingly in his teaching and he now offers courses on Brazilian as well as Russian history.