FOR the last 40 years London-based photographer Richard Fitzgerald has travelled across Ireland taking pictures of the land and its people.

Back in 2018, influenced by a short poem by Patrick Kavanagh, his photos focus on countryside back roads and intimate moments between people in their dimly-lit cottages and farms.

“My memories are steeped in Irish country life,” he said. “I worked on the land before leaving my homeland, I ploughed fields, milked cows by hand, made haycocks, planted potatoes, and took horses to the forge.

“But all too soon it was over and I joined the ranks of thousands of other Irish emigrants bound for a new life abroad.” 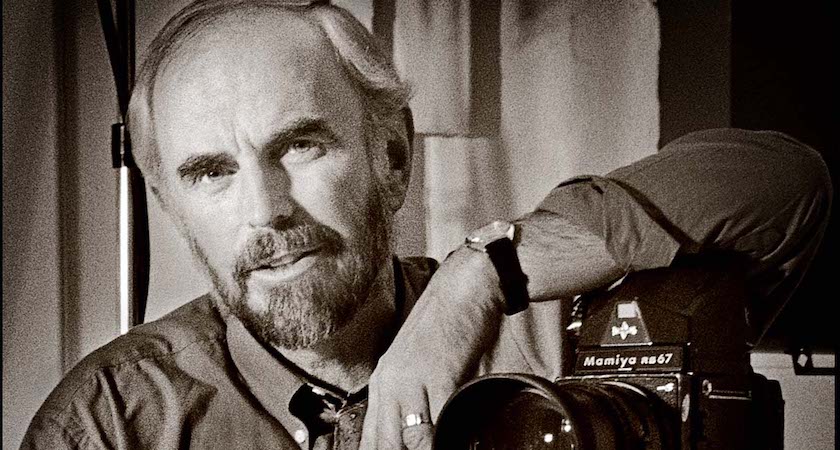 Irish photographer Richard Fitzgerald photographed during at shoot at his London studio.

Scroll down to see six pictures of Ireland you're unlikely to have seen before...

Fitzgerald sid he was thrown out of Ireland at the age of 14 after being wrongly accused of stealing a bottle of lemonade - he later made London his home and set up his own studio there.

The Waterford native, who regularly visited his home town of Tramore, brought together a collection of monochrome photographs he says “reveal the dark underbelly of Irish rural life”.

The book Dark Ireland: Images of a Lost World is, he said, record the unique aspects of Irish life that have almost disappeared.

Among Richard Fitzgerald’s previous books are Vanishing Ireland with Irish writer Edna O’Brien, and Ireland: The Parting Glass which recalls poignant childhood memories including his own.

His documentary The Brothers was also nominated for an Irish Film and Television Award.

Fitzgerald sadly passed away in 2019. Here, we look back at some of the photos that feature in the book

1. People kneeling to say the rosary at a farmhouse in Co. Waterford in 1991 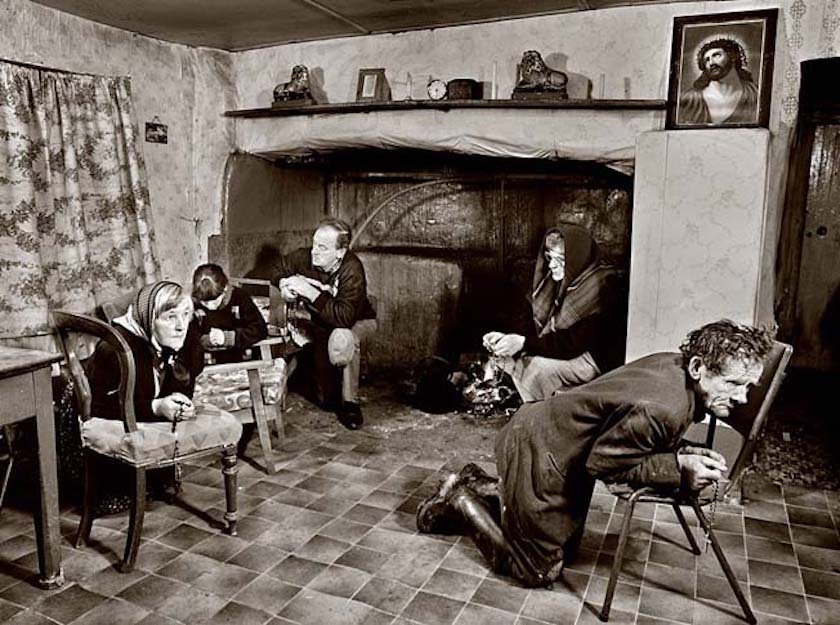 2. Sitting on a stool in the middle of a country road, a man continues to milk the cow unconcerned by the danger of any approaching traffic.

Richard said: “I photographed this man and his cow at evening milking time. He frequently allowed his cows to graze on the lush grass by the roadside, in Ireland this free grass was often referred to as ‘The Long Acre’." 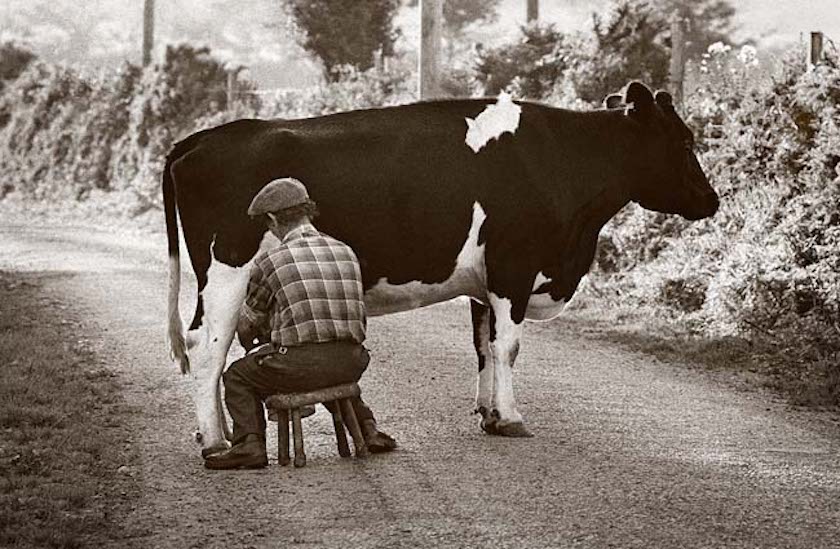 3. A coffin-maker come funeral director measures up a customer at his blacksmith's forge in Co. Kerry in 1985.

“A coffin-maker measures up a customer at his blacksmith’s forge, he was a highly respected craftsman in the community and repaired all manner of farm tools. He was also the local undertaker. I remember there was a cold rain outside, so I welcomed the heat and the sound of the bellows blowing the flames of the fire". 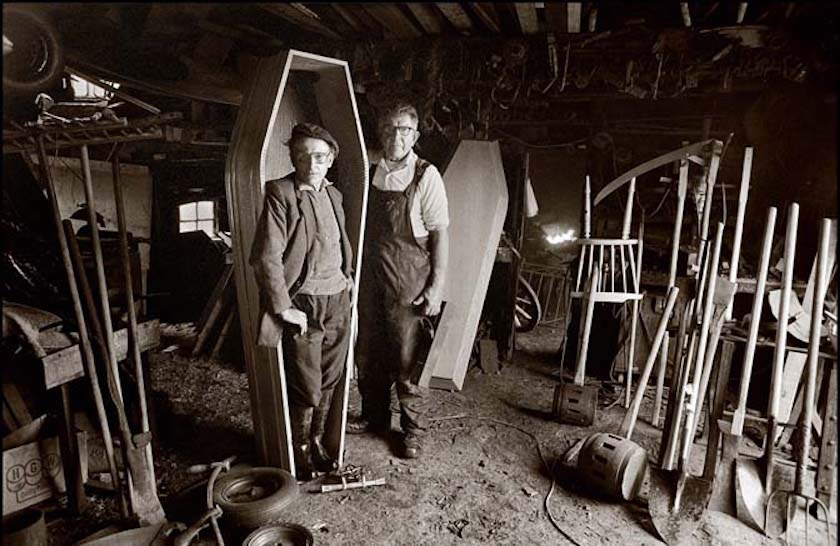 “Resembling a strange creature with six legs, the black upturned currach came crawling from the sea, the men swaying to and fro with the weight above their heads. I buried my Rollieflex camera amongst the wet stones to get the lowest possible angle of view against a rain-filled sky.” 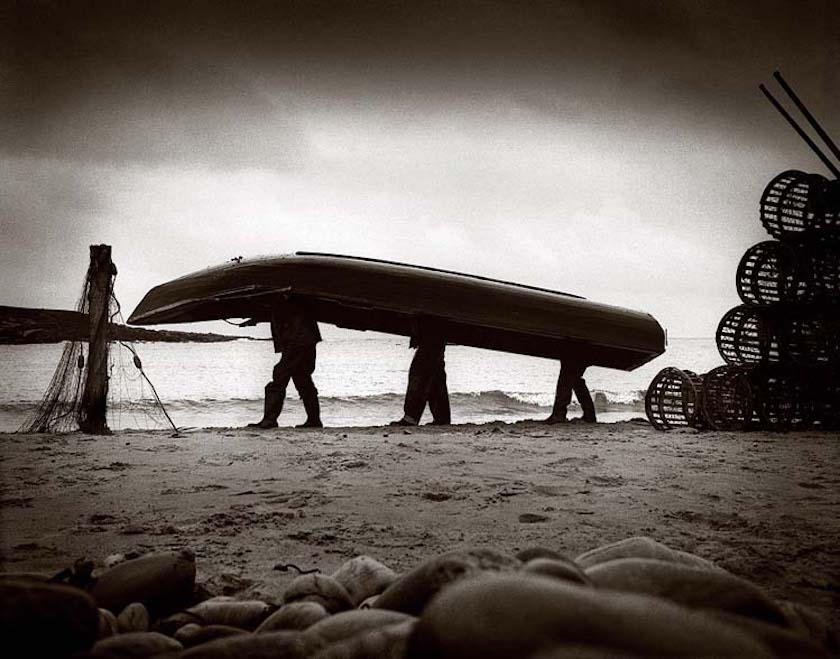 “The animals stand patiently waiting for their next customer while the rain clouds move in over the distant hills. I took this photograph early one morning after spending the night camping on the nearby sand dunes." 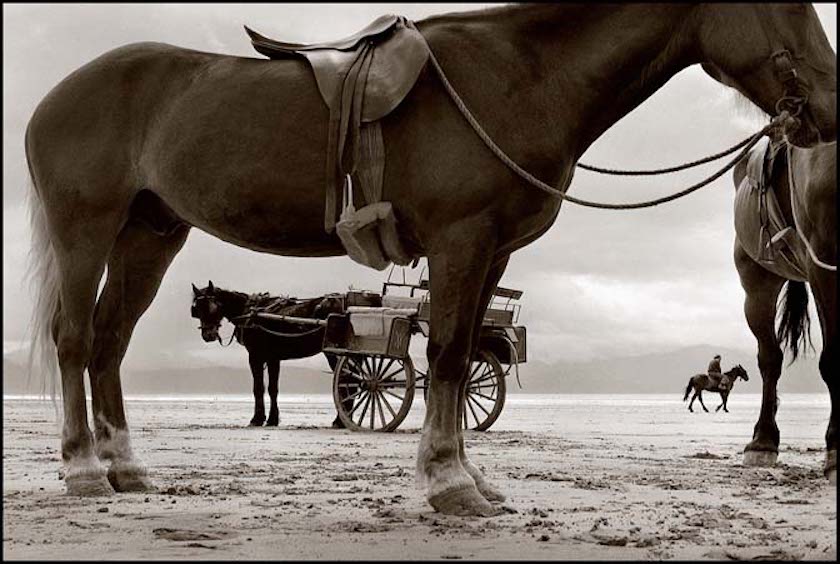 6. A group of donkeys wait to be sold, beside chatting farmers at a horse fair called Puck Fair in Co. Kerry in 1971. 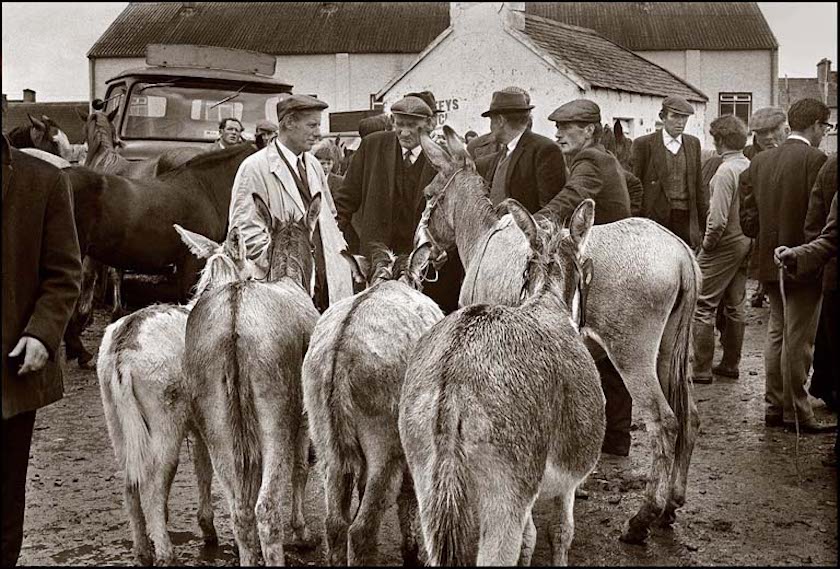