PRAYERS were said and glasses raised among the Irish community in Britain this week as it mourned the loss of property developer Tom Bugler.

Mr Bugler passed away on January 4 aged 80 at the Wellington Hospital in St John’s Wood, with his five children by his side, and Irish music playing softly in the background.

The Clare-man was a well-known face in construction, charitable and golfing circles across Hertfordshire and London.

Born in 1936, into a large extended farming family in Kilateera, Mountshannon, Country Clare, Tom was the eldest of four, and a keen hurler in his youth.

After attending a seminary, Tom returned to Mountshannon and being a born entrepreneur had a new calling for opportunities in London.

He arrived in 1958, and lived in a caravan, before settling in digs in Tottenham.

On arrival in England he met his wife, Una, a teacher from Tubbercurry in Sligo.

The couple were married in 1960 and had 46 happy, fun-filled years together before her sudden death in 2006.

Working for the McInerney Group, with Dan McInerney - a friend from his home town, Tom was soon driving the company’s success and by the early 1970s when the consolidation took place for public issue, he was a leading figure as McInerney Group Director.

Tom had 30 successful years at McInerney’s and oversaw developments in London, Portugal and the Middle East, which included him being a passenger on one of the early flights on Concord in 1977.

In 1982 at the age of 46, he left the company and set up own private development company from the dining room in his home in Croxley Green, aptly name Mountshannon.

A year later, at age 47 and with five children at varying stages of education, he re-mortgaged his house to “build a few more houses”.

They now run the company with its team of 80 full-time staff and over 1,000 in the field, turning over around £65m and building 500 properties annually.

The life and soul of the party, Tom was a key figure of a many social sporting clubs and associations, and a founding member of the London Irish Golf Society.

Just over five weeks ago in November 2016, he attended the 49th annual Ladies Dinner Dance at the Grovsenor House Hotel in London, despite failing health, and received a great welcome, and recognition for his role in the thriving society.

His love of golf saw him achieve a seven handicap and win many awards and trophies.

In 1978, he became captain of West Herts Golf Club in Croxley Green, near Watford, and he sat on the forward planning committee for many years. His wife Una also loved to play golf and was Lady Captain at West Herts in the 1980s. 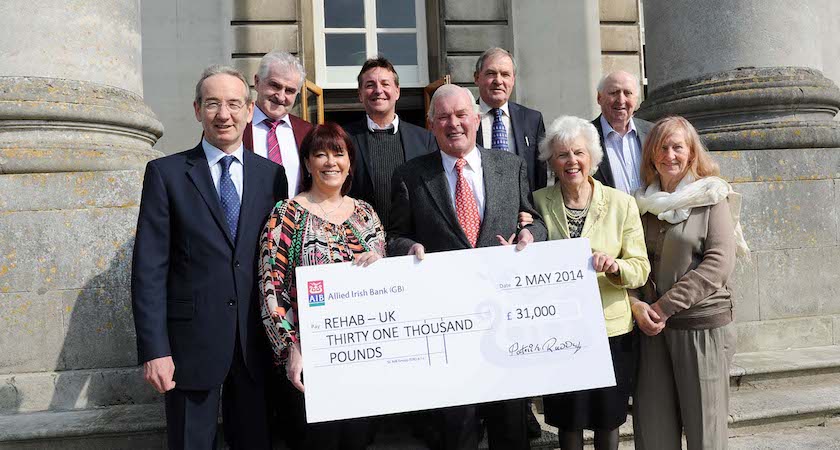 Tom Bugler he was a committee member of the Rehab UK Golf Classic, which has been taking place at Moor Park golf club in Rickmansworth, Herts since 1993. To date, in excess of £885,000 has been raised for the charity. Tom is pictured back, right in this photo from 2015 when a cheque for £31,000 was handed over to Rehab, the proceeds from the previous year's Rehab UK Golf Classic. (Picture: Malcolm McNally)

Always active, Tom, was a member of the West Watford Golfing Society and served as president and he also gained membership to other prestigious sporting clubs including the MCC.

Tom embodied everything that people love about the Irish, a great sense of humour, a quick wit and a twinkle in the eye.

He loved a little flirt and made sure he said hello to everyone he met and ask them how they were.

He was described as firm but fair in the workplace, and inspired loyalty and trust amongst his staff, with many staying with him at work for a lifetime.

He was incredibly proud of his heritage and where he came from but like many others of the era, he embraced all that was good in England, and worked hard to make life happy for those around him.

Most of all his family say he was a great dad.

A father-of-five and grandfather of 10, family were always at the very core of his being and the driving force for his lifetime’s work and the focus of his heart at the end.