ENDA Kenny has formally resigned as Taoiseach after six years as Ireland’s head of Government.

Mr Kenny is the longest serving Fine Gael Taoiseach in history, and has served in the Dáil since 1975.

To pay tribute to Mayo's political son, here are 11 memorable moments, both political and light-hearted, over the years…

Enda Kenny’s decision to retire as Fine Gael party leader the latest turn in political road stretching back to 1975 pic.twitter.com/0PkhTmbmHB

Enda Kenny was just 24 years old when he succeeded his late father Henry as TD for Mayo West – four years before his successor, Leo Vardkar, was even born.

Stepping up to the plate

Enda Kenny’s political career wasn’t exactly an overnight success story – it was 19 years before he reached the Cabinet table in 1994 and 36 years before he was elected Taoiseach at the height of the financial crisis in 2011.

Hanging out with Obama

Enda and former US President Barrack Obama seemed to have a genuinely good relationship, despite this excruciating moment. 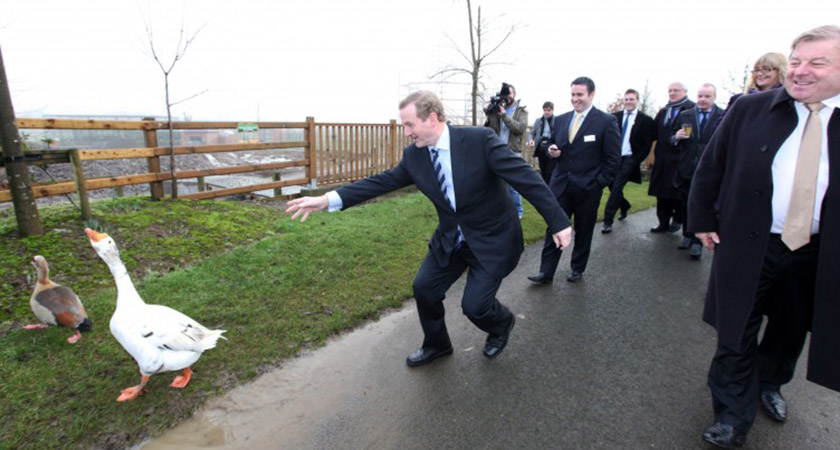 Enda had a bit of fun in 2013 when he chased some geese during a walking tour of Tayto Park in Co. Meath.

Rocking out to Bruce Springsteen

Enda was caught on camera dancing, singing,waving to the crowd and also playing air guitar at a Bruce Springsteen concert in Dublin in 2016. Check out those moves.

Leading the way on equality

“There is nothing to fear for voting for love and equality,” was Enda Kenny’s message on the eve of Ireland’s 2015 marriage equality referendum. A few days later, Ireland became the first country where the electorate voted to make gay marriage legal.

Enda’s trusty Nokia 6310 was a constant by his side until 2013, when he accidentally dropped it into a sink.

In an emotional address in 2013, the Taoiseach formally apologised on behalf of the state for its role in the horrors of the Magdalene laundries.

Enda Kenny and the inability to pet dogs normally pic.twitter.com/RoLycAmkyd

A skilled politician no doubt, but it’s fair to say this wasn't Enda’s forte as Taoiseach.

Getting down with the kids

This clip of Enda dancing at Bloom Festival in Phoenix Park is already a classic. Could you see Leo Varadkar doing this?

Putting Trump in his place

The Taoiseach was praised around the world in 2017 for his St Patrick’s Day address to US President Donald Trump in Washington in which he emphasised the saint’s role as an immigrant.

He reminded the most powerful leader on Earth that, "Four decades before Lady Liberty lifted her lamp, we were the wretched refuse on the teeming shore.”