AN Irish pensioner has been reunited with the hero Garda who came to her rescue as she tried to make her way home through throngs of concertgoers in Dublin.

Mary Dent, 85 from Dublin, called RTÉ's Liveline to find the helpful Garda who carried her bags and held her hand to walk her home as crowds headed to the Robbie Williams concert last Saturday, June 17.

As thousands made their way to the Aviva Stadium in south Dublin, Ms Dent was overwhelmed by crowds as she tried to reach her home, located a short distance from the venue.

After two young women helped Ms Dent to Shelbourne Road, they asked two nearby gardaí to help her home.

"They said certainly, and this very nice garda took my bags and held my hand," Ms Dent said.

The area was packed ahead of Robbie Williams over the weekend - fair play to this Garda who helped an older lady make her way through #Gent pic.twitter.com/dnBttJHHic

"There was an uproar of clapping and cheering - there were hundreds of young people, you wouldn't believe it, they were all taking pictures," Ms Dent told host Joe Duffy.

The photos of the hand-holding pair soon went viral across social media, but Ms Dent still didn't know who the garda was.

True to form, Liveline tracked down Garda Reserve Paul Barnwall who is a part time member of An Garda Síochána serving from Dublin's inner city Store Street station and a full time farmer. 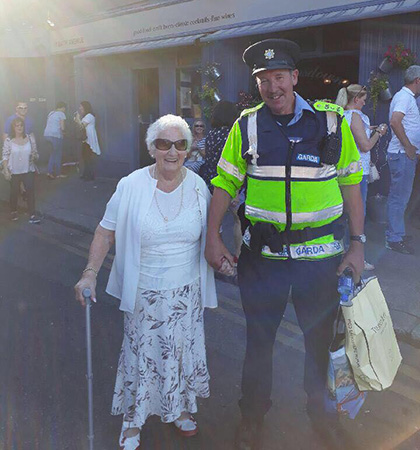 "I said I'd be your toyboy!" Gda Barnwall joked to Ms Dent on air.

"I was totally taken aback [by the reaction], I was amazed, it was a lovely sunny afternoon and I was walking with a lovely lady - what more would you want.

"I knew nothing about it until Sunday when people are telling me I'm on YouTube.

"I ignored it initially but by Sunday evening I realised it had gone viral," Garda Barnwall said.

Two hotels touched by the pair's viral story, offered Garda Barnwall a stay at Fota Wildlife Hotel and Resort and Ms Dent a night's stay at the Seafield Hotel in Wexford.