18 years since The 'Holy Cross disputes': Catholic schoolchildren subjected to daily abuse, violence and bomb attacks as they walk to school

THIS WEEK marks eighteen years since the start of the September ‘Holy Cross disputes’, a series of violent sectarian clashes which repeatedly endangered children trying to go to school.

It’s the year 2001. People in Northern Ireland are tentatively navigating life after the signing of the Good Friday Agreement three years before, which had aimed to end the decades-long violence of ‘The Troubles’.

But sectarianism, xenophobia and fear are still rife throughout the country, particularly in areas where Catholics and Protestants, Unionists and Republicans, are segregated.

One such place is Ardoyne, in Northern Ireland’s capital city of Belfast.

The trauma of the thirty-year-long ‘Troubles’ has left Ardoyne highly segregated, with Protestants and Catholics split down the middle and living in separate areas. Things hadn’t always been this way: before the outbreak of violence, the two communities had mixed with each other, and the proof was in a small all-girls Catholic school which was now slap-bang in the middle of a Protestant area. 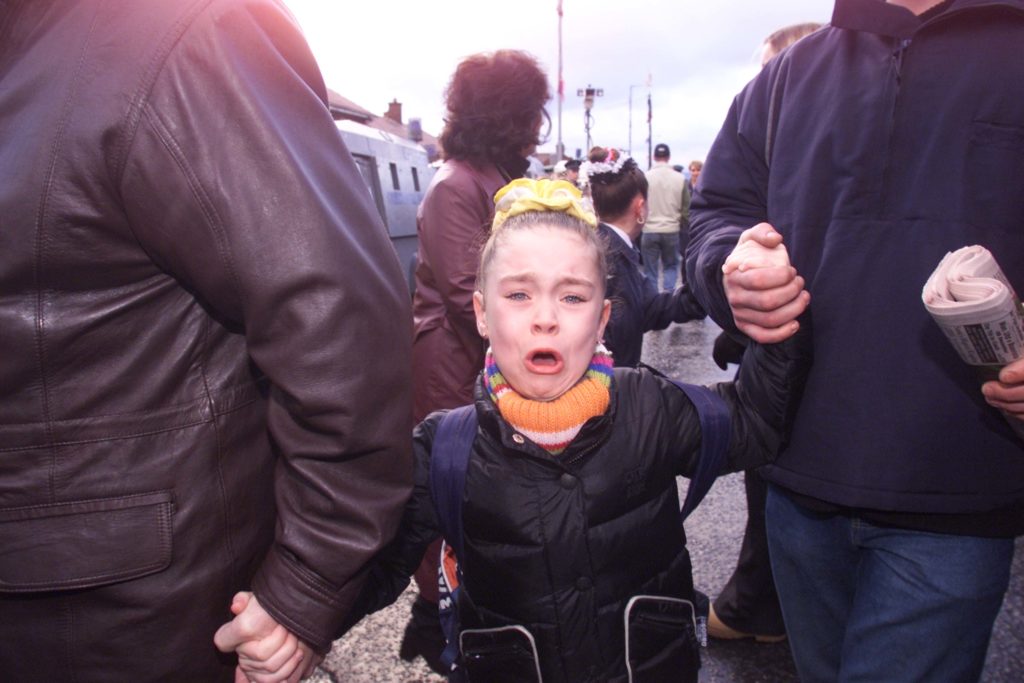 A Holy Cross primary school girl is escorted through a massive security operation to school November 12, 2001 in the Ardoyne area of Belfast. (Photo By Cathal McNaughton/Getty Images)

In June 2001, the last days of the school term at Holy Cross, loyalists block the entrance to the school and throw stones at those trying to enter. The feud grows and spreads. Loyalists and nationalists clash with each other and riot in the streets. People are shot, bombs explode and houses are set alight. People flee their homes for fear of an attack. 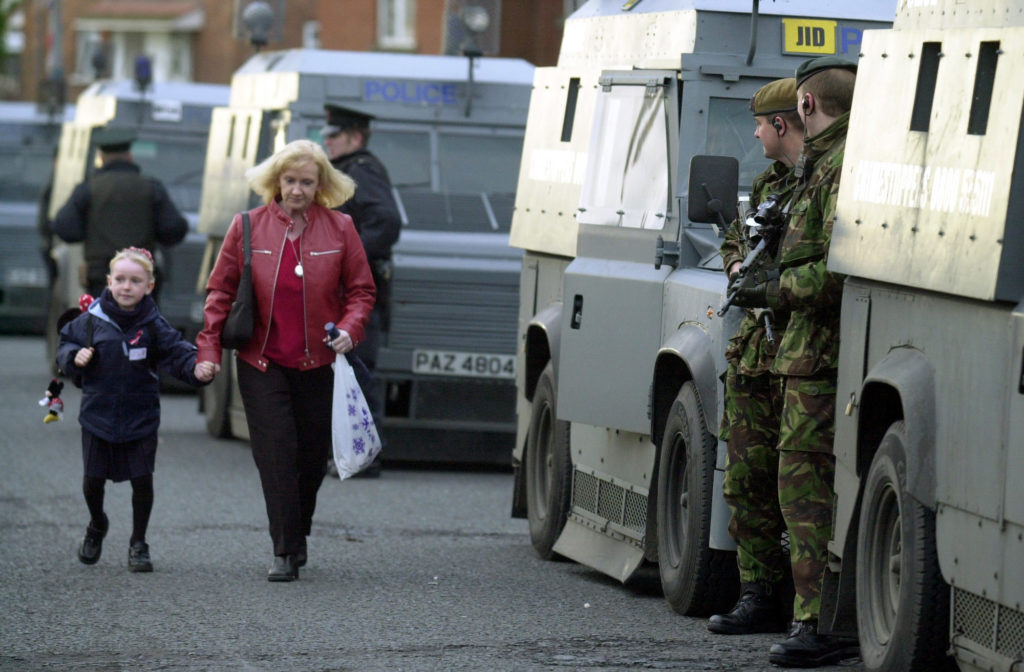 Soldiers watch Catholic parent and child walk up the Ardoyne road as part of the daily ritual carried when children are walked to the "Holy Cross" school through Protestant housing areas in north Belfast. (Photo by Ross Land/Getty Images)

Talks take place over the summer break but no solution is reached.

In September, the first days of a new term, loyalists again begin picketing the route that the primary school children take to school. It starts with signs and slogans, with the Loyalists claiming that Catholics are denying them access to facilities and attacking their homes, but likewise Catholics claim this same discrimination from Protestants. 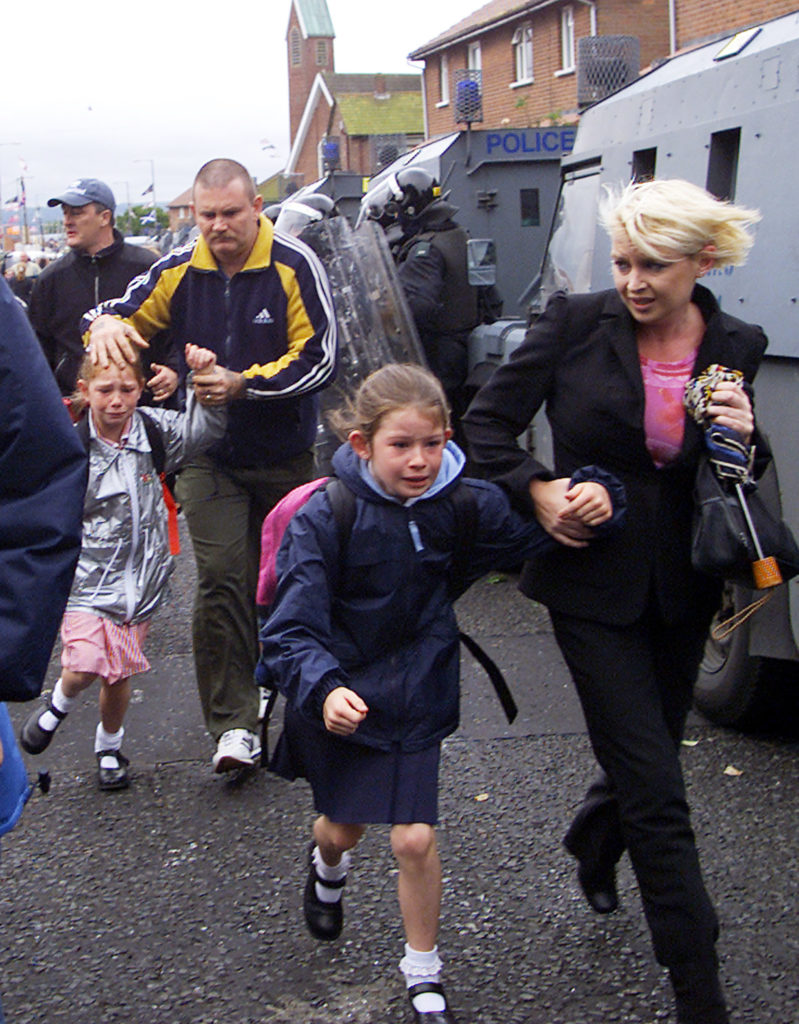 Parents comfort their daughters in the aftermath of a blast bomb attack on their way to classes at the Holy Cross Primary School.  (Photo by Hugh Thomas/BWP Media/Getty Images) 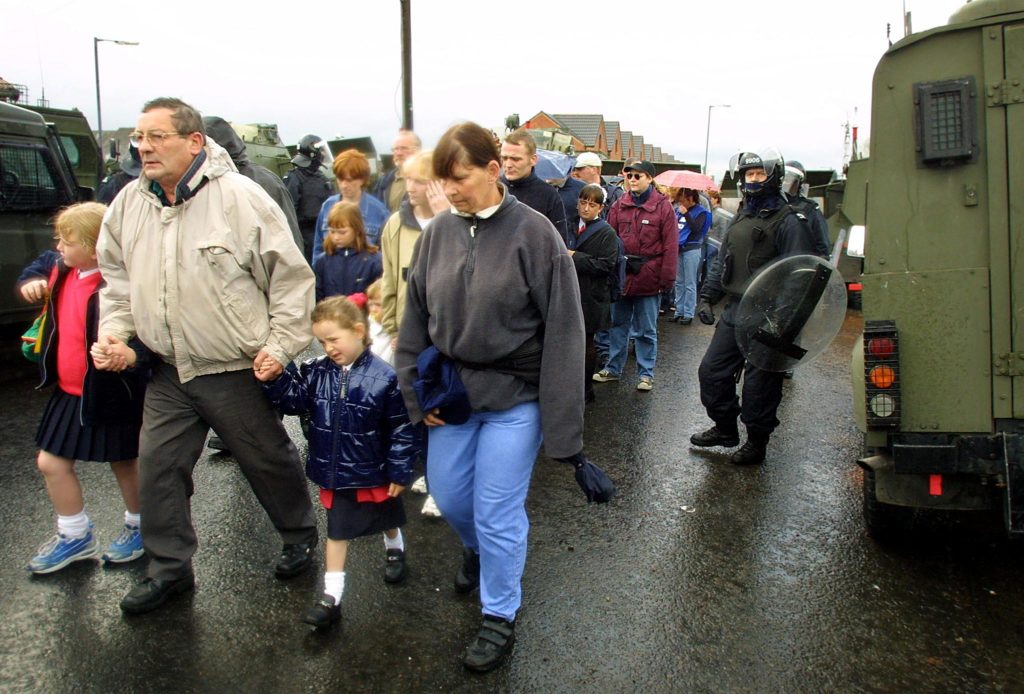 Local youths from both sides clash with each other and with police. More bombs go off; an oil tanker catches fire and destroys three homes.

An explosive is thrown as the children walk with their parents to school, injuring four officers and a police dog. A Loyalist terrorist organisation claims responsibility for the attack. That same organisation threatens people with death if they are seen bringing their children to school. 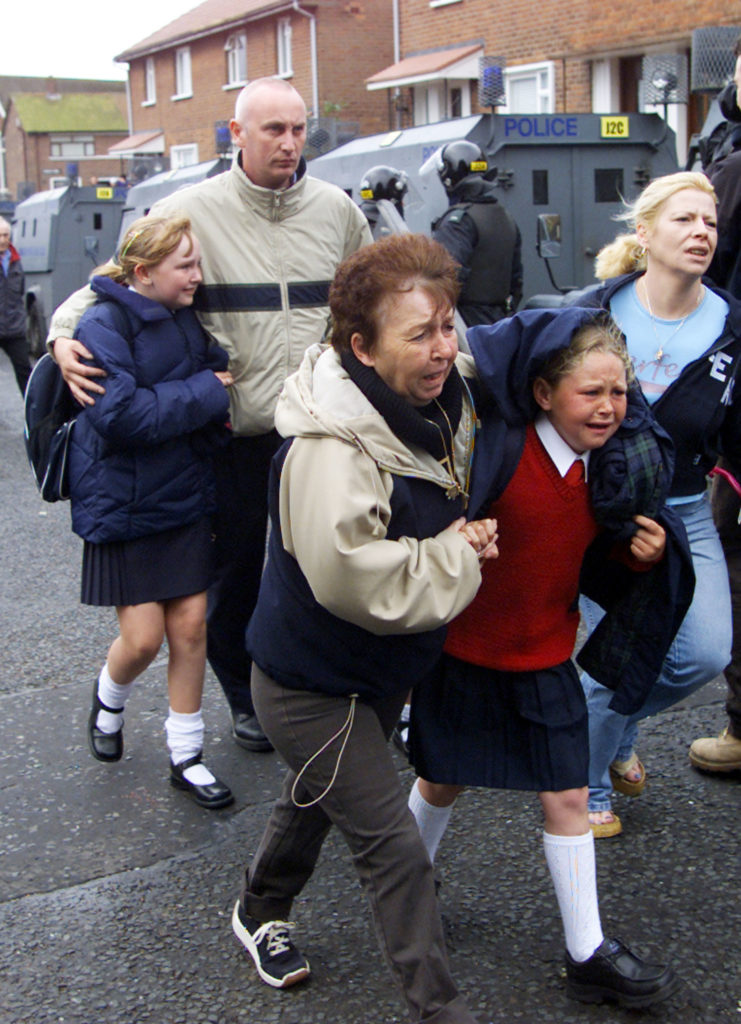 Parents comfort their daughters in the aftermath of a blast bomb attack on police. (Photo by Hugh Thomas/BWP Media/Getty Images)

While things seem to be quieting down slightly, over the next few weeks there are more violent clashes, with fireworks being weaponised against the schoolgirls and their families on their daily walk. 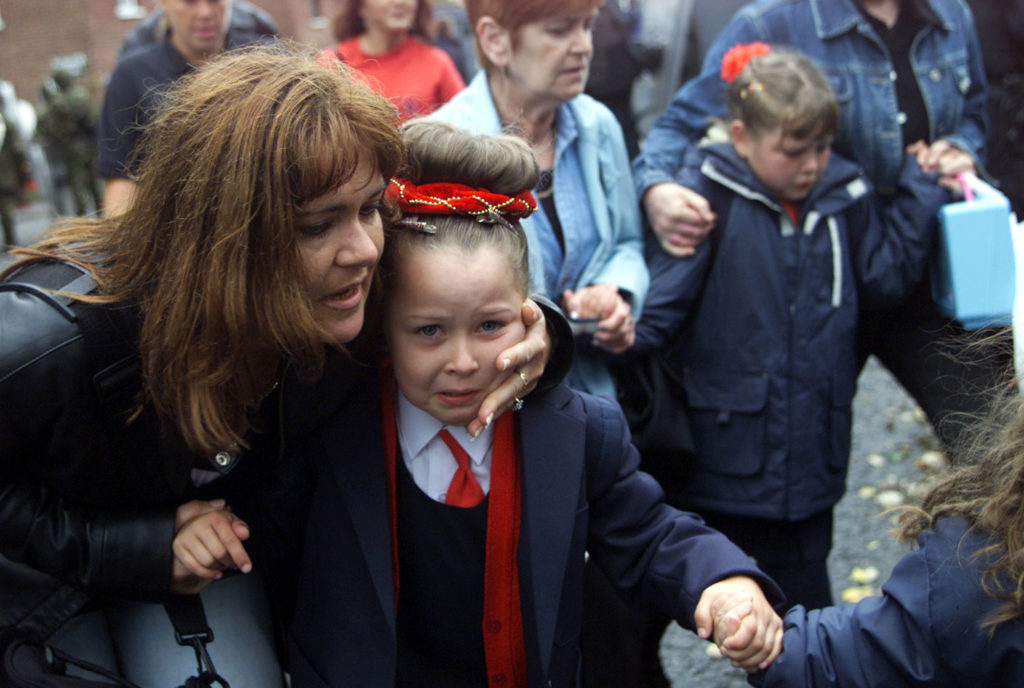 A mother comforts her daughter in the aftermath of a blast bomb attack while on the way to school September 5, 2001 in North Belfast. (Photo by Hugh Thomas/BWP Media/Getty Images)

It is almost twelve weeks before the schoolgirls are able to walk to school without a police and Army escort, but shockwaves from the ‘disputes’ continue to spark violence towards the school and its students for months and years afterwards.