Abortion banned in Poland in all but extreme circumstances

POLAND'S top court has passed legislation banning all abortions except in cases of rape, incest, or where the mother's life is in danger.

The controversial new law has left the country bitterly divided and even sparked riots in October 2020 when it was first introduced.

An important 1993 court ruling - allowing abortions in the case of severe foetal abnormalities - was officially overturned by the court on Wednesday afternoon.

The change is highly significant, as 98% of abortions carried out in 2019 were made on these grounds, so the ruling has effectively banned the procedure outright.

Justifying its decision, the court declared that "an unborn child is a human being" and it is therefore protected under the right to life outlined in Poland's constitution.

Thousands of protestors congregated at the steps of the Warsaw's constitutional court building in opposition to the landmark ruling. Red flares were let off, and amid a flutter of LGBT flags, placards reading 'Free Choice, Not Terror' could be spotted among the crowds.

While public opinion on abortion generally tilts conservative in Poland, one poll showed that 59% of Poles disagreed with the change that came into effect at midnight on Wednesday. 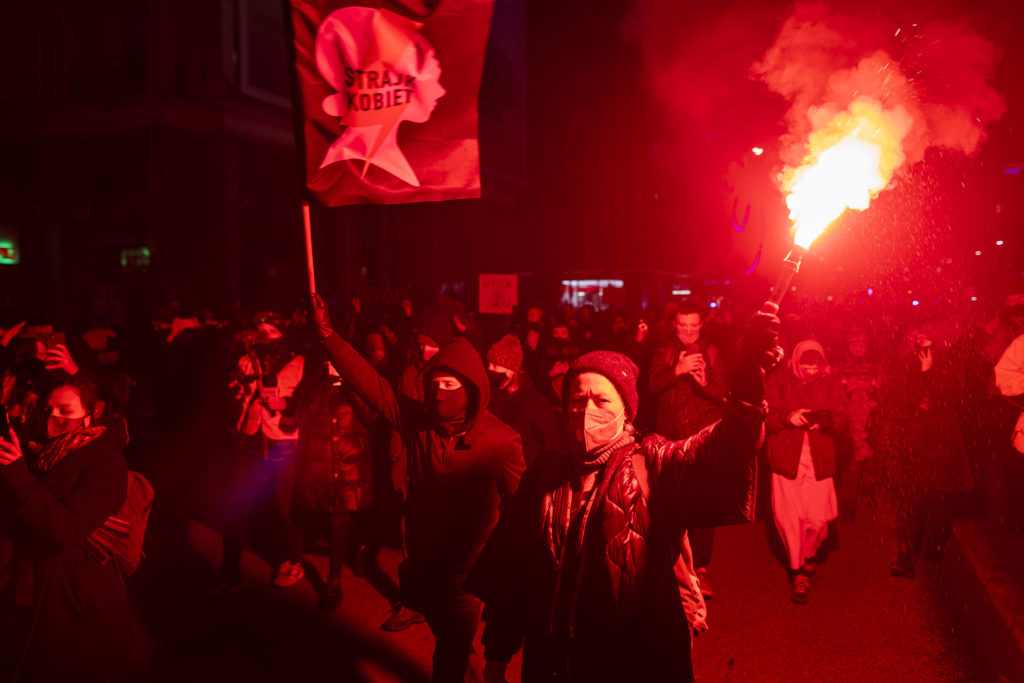 A demonstrator holds a flare as she take part in a pro-choice protest in the centre of Warsaw, on January 27, 2021, as part of a nationwide wave of protests since October 22, 2020 against Poland's near-total ban on abortion. - The banner reads: "Abortion on demand"

Supporters of the ban are emphatic about the human rights of the unborn child.

"We are very happy that this judgement has been published. It is a great step towards the realisation of human rights of all human beings," Karolina Pawlowska from the Ordo Iuris international law centre told the BBC.

"This also means there will no longer be discrimination against children who are sick or disabled," she said, adding that the ruling was in keeping with the UN treaties on the rights of the child.

Abortion rates in Poland are already extremely low, standing at roughly one thousand procedures per year - though it is estimated that around 200,000 women travel abroad or opt for illegal abortions each year.

The central European country - which performed up to half-a-million abortions per year under communist rule - has undergone a transformative Catholic revival over the past three decades.

Poland's conservative Rule and Justice Party maintain close links with the country's powerful Catholic Church, and looks askance at the trajectory of other Catholic countries, such as Ireland, which one top Polish official described as a "Catholic desert with LGBT ideology totally out of control."