THE DISCOVERY of human bones behind a pub in Northern Ireland ten years ago could rewrite Irish history.

Pub owner Bertie Currie, of  McCuaig’s Pub in Co. Antrim, unintentionally uncovered an ancient burial ground, finding the remains of three men, as he was digging land to make a driveway. 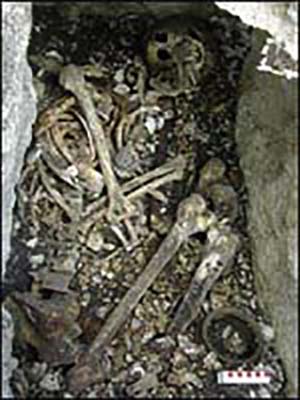 The ancient remains found behind the pub

Following a recent DNA study, the Washington Post reported that the discovery challenges the long-held understanding of Irish people's origins.

Experts, including geneticists from Trinity College Dublin and archaeologists form Queens University Belfast, have undertaken a detailed analysis of the remains.

The Irish were thought to  be descendants of the Celts  – a tribe of people who originated in central and northern Europe, arriving in Ireland around 500 BC.

“The DNA evidence based on those bones completely upends the traditional view,” Barry Cunliffe, Emeritus Professor of Archaeology at Oxford, told the Washington Post.

The research suggests that the three skeletons are the ancestors of the modern Irish. It is believed they existed prior to the Celt arrival, by about 1,000 years or more.

The research published in the Proceedings of the National Academy of Science journal, stated that the most striking feature of the bones was how much their DNA resembled that of contemporary Irish, Welsh and Scots.

Other findings of bones in Ireland have been likened to Mediterranean people.

Radiocarbon dating revealed that the remains found at the pub in Co. Antrim date back to about 2000 BC.

This means that they are centuries older than the other artifacts that have Celtic-origins – such as items discovered in Switzerland, Austria and Germany.