And, this being Ant, he couldn't resist poking fun at his pal with a birthday message that included an amusing throwback snap of Dec.

"Happy Birthday from the big one to the little one!" Ant wrote on Twitter alongside an image of Dec in a rather unusual pose.

The picture featured Dec, awkwardly poking his head through a stand-up hanger with a fetching red and black flamenco style dress on it.

Ant, meanwhile, is slowly easing back into public life after taking a break of several months while he tackled his drink and drug issues.

The presenter has been largely quiet on social media in the interim, though he did recently return to Twitter to react with amusement to a post from friend and Britain's Got Talent colleague David Walliams. 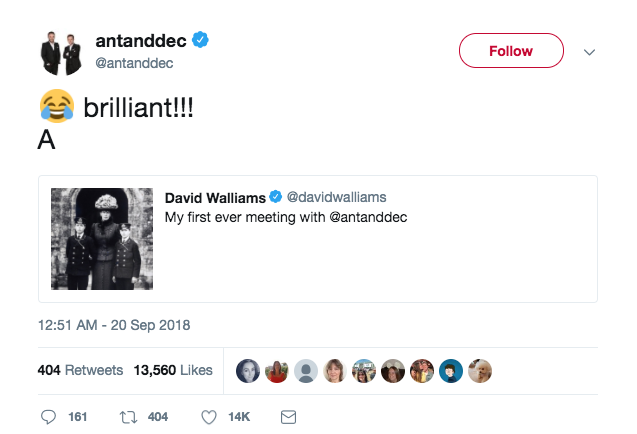 It would appear that, despite his ongoing personal problems, Ant hasn't lost any of the sense of humour that have helped make him an enduring presence on our screens.

There's still a long way to go though with Ant's extended break from our screens looks set to continue with Holly Willoughby already drafted in to take his place alongside Dec on the upcoming series of I'm A Celebrity…Get Me Out of Here!

See More: Ant And Dec, Ant McPartlin, Anthony McPartlin, Declan Donnelly, I'm A Celebrity... Get Me Out Of Here