DETAILS of the last conversation former Munster legend Anthony Foley had with his wife, Olive and son, Tony were revealed during his funeral Mass in St Flannan’s Church, Killaloe on Friday.

Olive recalled the last time she spoke to her husband was last Saturday, just hours before he passed away at the Munster team hotel in Paris.

"We chatted about the lads and how they were getting on in the athletics, and how Tony was faring in the javelin.

"Tony had a chat with us too. It was a lovely conversation... I didn't know it would be our last," she said, breaking down.

During a heart-rendering tribute, the mother-of-two praised her "soul mate" with whom she had spent "seventeen wonderful years" of marriage.

She drew laughter from the packed church of 500 several times, describing life with Anthony - affectionately known as 'Axel' - and their two boys Tony and Dan.

Foley, who wasn't known as a talker, would "ring and ring and ring" Olive everyday, and when she would answer "he'd say nothing, sure".

"I never rang him back because I knew he'd be ringing me again," she quipped.

"It was an idyllic life. Our home was so happy and it was a haven for all the most important things in life. Anthony's values were so perfect.

"The show will go on and I'm going to stick to our plan, because Anthony is going to be with us in spirit every step of the way. He was my soul mate and we were perfect together.. he will never leave my heart." 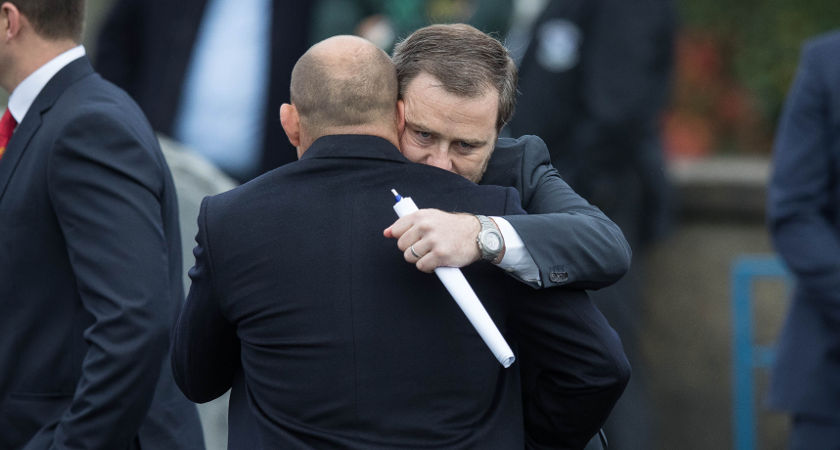 She thanked their friends and family, and those who organised the funeral which "enabled us to focus on what was important, and spend time with Anthony."

"I'm handing Anthony over to God now...We'll take it one day at a time," she said breaking down in tears to a thunderous applause.

The twin communities of Ballina and Killaloe were submerged in a sea of red and white as residents and businesses displayed flags and banners in memory of their deceased hero. 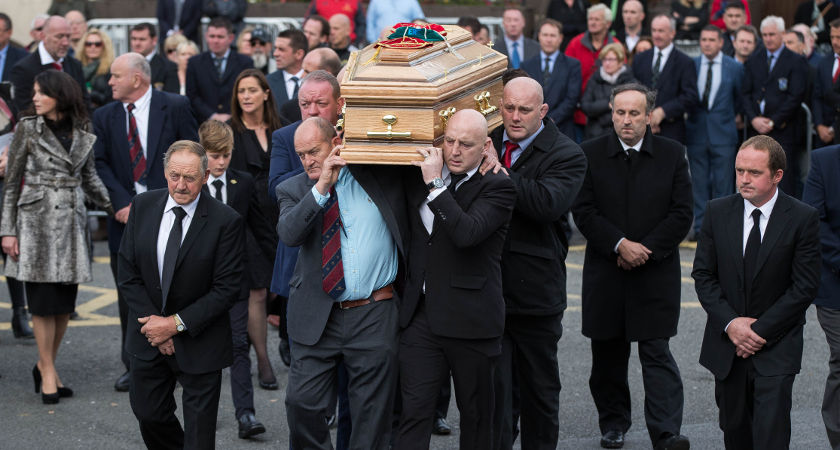 Mick Galway, Peter Clohessy, Keith Wood and John Hayes carry The coffin [©INPHO/Ryan Byrne]
There were two groups of pallbearers – Paul O’Connell led the one with retired Munster rugby players and the second one for current Munster players and management was directed by team manager Niall O’Donovan.

The chief celebrant, Fr Pat Malone, PP Clarecastle, who is a family friend, described Olive's reflection after Holy Communion as a “magnificent tribute”.

In his wide-ranging homily, Fr Malone said it is fitting that the Foley family celebrates with dignity the life and achievements of a man who lived “life with great dignity and personal and professional integrity”.

“My memories of Anthony as a loving, caring and interested dad, revolve around the magical family moments in the garden. Anthony pucking a sliothar with his lads, kicking a football, swinging a golf club and erecting a trampoline.

“I could see he enjoyed the different temperament of his two boys, and with the wonderful sports brain he had, he was silently assessing their temperament for future sporting engagement. I remember him when the excitement of the hens’ arrival was the flavour in family life, him searching with his boys for the eggs that were laid. The excitement when they were found was shared and young Tony would look over the fence and invite all to the breakfast.

“These happy, cherished moments will hopefully in time offer many moments of pleasure to Tony and Dan,” he recalled.