BARRY KEOGHAN prays to his late mother for good luck before every big audition.

The 26-year-old Dublin actor lost his mum when he was just 12-year-old.

He was raised by his aunt Lorraine and grandmother Patricia, after spending time in 13 different foster homes growing up.

His late mother struggled with addiction throughout much of her adult life, with Barry and his brother Eric taken into care before moving in with their grandmother.

Speaking in an emotional interview on Living With Lucy [via the Irish Mirror] the Chernobyl star revealed the special role his late mum plays in every audition he undertakes.

“Before every audition I say a little prayer because you want that little push before you go in,” he told interviewer Lucy Kennedy.

“I have great memories of her, she was gorgeous,” he adds.

“She was 6ft, long black hair, that’s where I get my looks sure.”

It’s a process that has helped Keoghan land a string of career-making roles in films like Dunkirk and The Killing of a Sacred Deer.

There could be even better to come, with the young Dubliner reportedly set to play Shane MacGowan in a biopic based on the life of The Pogues legend.

Despite all of the success he has enjoyed, Keoghan believes it’s the presence of his mother’s spirit that has helped him achieve his dream.

“I really do feel it,” he said. "I believe she’s here with me through this journey, the good times and the bad.”

And while his late mother remains a source of strength and inspiration, Keoghan is also thankful for the love and support of his surviving family and the sacrifices they made to ensure he grew up among them. 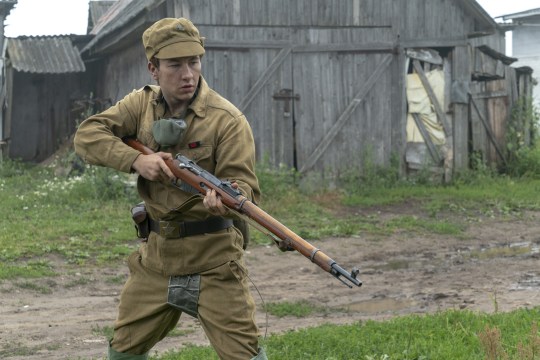 “It’s all about my family. My nanny and my auntie, they have been a huge part of my life, taking me in from foster care,” he said.

“They fought for us, there was a lot of work involved to get us.

“When they took us in they looked after us very, very well.

“Lorraine (aunt) is like a mother. Then you have my sister (Gemma) who gave up work for me and my brother (Eric).”

“Gemma had to go into the room with my nanny and Lorraine and Eric and I had the other room.

“She was only young when we moved in, she gave up everything. I love them for that.”

Now living the dream in Hollywood, Keoghan hasn’t forgotten where he came from while his family are no doubt excited about where he could be headed next.

Living with Lucy airs on Virgin Media One on Tuesday, September 24 at 9pm.