A BELFAST mother has spent up to £4,000 transforming into the Pirates of the Caribbean fictional anti-hero Captain Jack Sparrow, and has even changed her name.

Amanda Sparrow, formerly Amanda Large, 43, who works as a saleswoman in her day-to-day job, has been dressing as the legendary character, played on screen by Hollywood actor Johnny Depp, since January.

After watching the movie for the first time, the mother-of-four became inspired by the personality and style of Jack Sparrow and began incorporating parts of his look into her daily wear.

“I already had dreadlocks so started to add beads and generally go for a pirate look,” she told The Irish Post. “I was fascinated by both his femininity and masculinity, and started to copy his style.

It was an alternative to being a Goth, which I had been when I was younger. I never found something that totally expressed how I feel about myself, you can’t have a 43-year-old Goth, you’d get looks.

Amanda, who changed her surname by deed poll to Sparrow and has amended her bank and medical records, spends up to one-and-a-half hours most mornings dressing as Jack Sparrow, applying full facial hair. 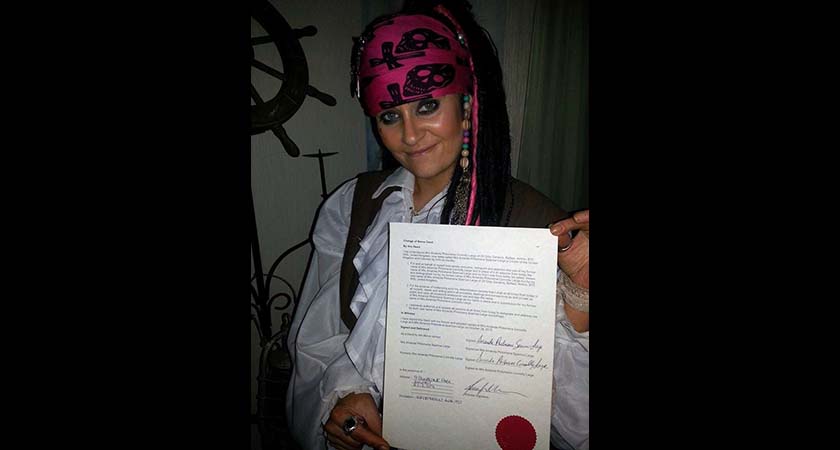 Amanda without the facial hair holding her deed poll

She sourced most of her outfit from car boot sales, but the most expensive part of her transformation was her gold veneers.

To date, she has spent £4,000 to look like Jack Sparrow, and says that the reaction has largely been positive.

“No one bats an eyelid when I walk through the streets of Belfast,” she said. “No one really insults me anymore, everyone seems to know me. In the past I’d get insults and some abuse but not it’s mostly complimentary.

My children are very supportive but my parents have taken a while to come round to the idea.

Amanda appears at public or charity events free of charge, but she admits that she’d like to make a living from being a female Jack Sparrow impersonator in the future.

She’s been confirmed for at least one special event in 2016, her 19-year-old daughter’s wedding in Newcastle.

“I’m giving her away dressed as Jack Sparrow, with the full facial hair and everything,” she added.

“I’ve even taken classes to speak like him, and I’m really enjoying my lifestyle as a modern day pirate.”