AS part of this year’s Páirc Festival, organisers took the opportunity to honour a number of community stalwarts in recognition for their contribution to the Irish community in Birmingham and further afield.

Wexford born John Fitzgerald has dedicated the vast majority of his life to Irish music.

John, who recently celebrated his 90th birthday, was unable to attend the Páirc Festival event but this did not stop him having an impact on bringing the event to fruition.

Páirc event organiser Ciaran Healy, from the Old Crown in Digbeth, credits the inspiration for the music festival to a conversation with John.

John opened the Minstrel Music shop in Sparkbrook in 1979 before it was relocated to the Birmingham Irish Centre in Digbeth. 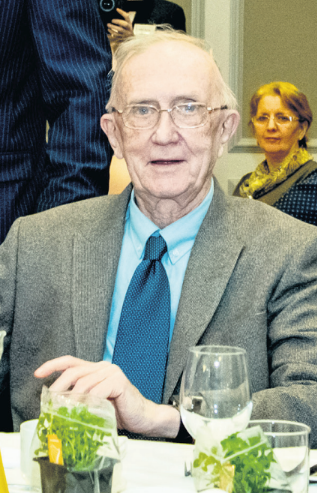 In addition to running the shop, John was also a music promoter and long-term representative for Brendan Shine. Famed for touring in a converted ambulance known as the Fitzmobile it was the tales of touring in the conversation with Ciaran Healy that persuaded him to press ahead with the Páirc Festival.

Second to be recognised was Brendan Farrell. Arriving in Birmingham from Dublin in 1952, the photojournalist has been credited with capturing the spirit of the Irish community for over 50 years with The Irish Post.

Working around the clock, breaking news stories, driving from Birmingham to Leeds or Liverpool, Gloucester or London, developing photos from film until the early hours of the morning; taking photos and recording the activities of the Irish community is only half the story to Brendan’s ongoing contribution to the Irish community.

A well-known and familiar face at the former Irish Centre in Digbeth, Queenie Mulvey was also recognised at the event for her work at the Irish Centre, where she worked for over 40 years alongside her late husband Noel. Local fundraiser Pat O’Neill was also honoured with an award recognising his contribution to the Birmingham Irish community.