SIR BOB GELDOF has revealed he decided to get married again for the sake of his children, following the death of his daughter Peaches from a drug overdose in 2014.

The 65-year-old Irish singer said he made the decision to tie the knot in 2015 with his partner of 20 years, French actress Jeanne Marine, because his family was left in such a bleak place after Peaches' tragic passing.

"When my [first] wife left me and subsequently died, I met a girl who knew nothing about me, who I married a couple of years ago, and I married her after my daughter died because things were so dark in our family that I feared for my children's health, never mind mine," said Geldof in a wide-ranging interview with Jarlath Regan in the latest episode of the Irishman Abroad podcast.

His first wife, TV presenter Paula Yates, left him for musician Michael Hutchence in 1995 and died in 2000 of a heroin overdose, a fate their daughter Peaches would also succumb to.

"It happened to be my wife's 50th birthday and we'd been together 20 years and to let some air into the room, to let some light into the fog, I proposed to her and she married me," said Geldof.

The Boomtown Rats singer said he believed that marrying Ms Marine would help his family move from a place of despair to one of of hope by celebrating their love for each other. 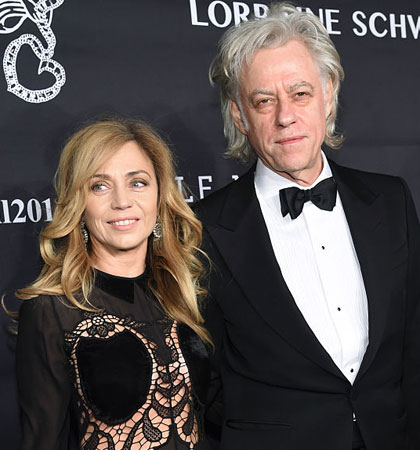 "Though all the family was ruined, she's a wonderful woman," he said. "But I didn't marry her because of that, I loved her anyway, but here was a celebration of life in the face of the other."

Life without love is not worth living, said the Band Aid founder, adding that he prefers to live in the now as he doesn't believe there is an afterlife.

"That's what you've got to hold on to, you know, you've to say this is better than anything that's coming or out there," said Geldof.

"In my view there is nothing after this, and that's a great relief to me.

"That there's just nothing, that all the time we are something becoming nothing, I find that intriguing. I find it refreshing and interesting that this exhausting thing, absolutely exhausting, is over.

"It's no more frightening than what you were before you were born, nothing. So that's what you're going to, and so, that to me that is a great relief, and so while you are here, what is the one thing that you know to be the superlative to existence? That's love, that is a sharing of a life."