A BRIDE-TO-BE has come in for strong criticism on social media after her Facebook post asking whether it would be okay to ban her groom’s three-year-old daughter from their wedding went viral.

The woman sparked widespread outrage after attempting to explain why she wanted to prevent her fiancé’s “crotch goblin” from attending the ceremony.

Writing in a post shared in a Facebook wedding group, the woman attempted to explain why she didn’t want the toddler present at her nuptials.

“I put ‘no kids’ on the invites so I thought he’d get the point, but he keeps mentioning her being there,” she wrote.

“I am marrying him, not his crotch goblin. That’s his mistake, not mine. I don’t’ want her there because she’s needy as f*** and makes everything about her AND I said no f***ing kids!”

The soon-to-be-married woman originally posted in the group in the hope of receiving advice and support on the topic. 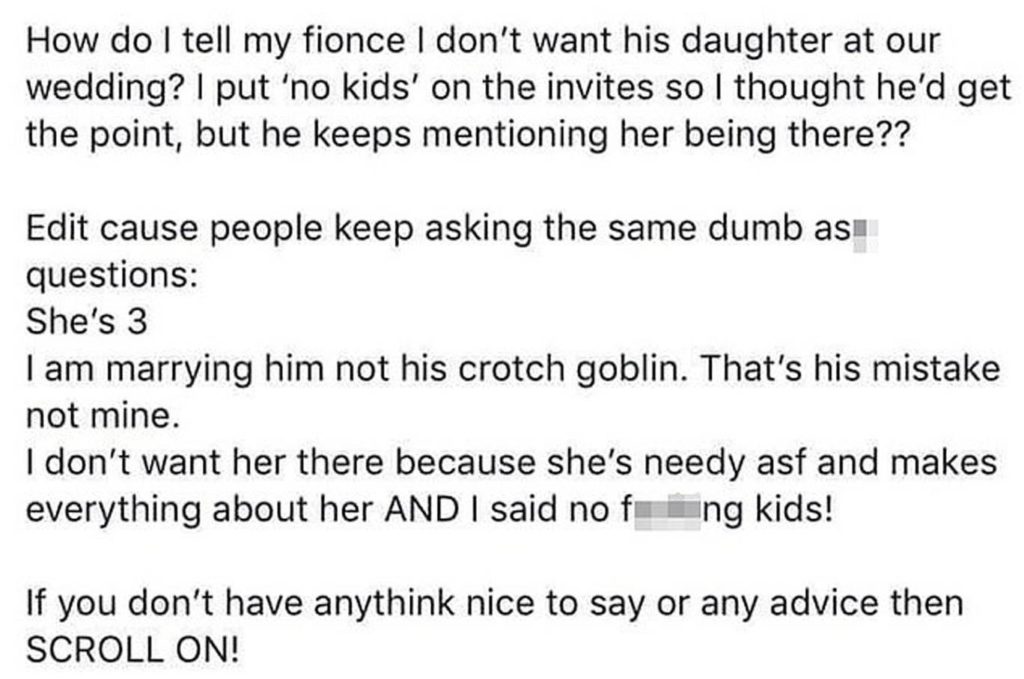 However, her post was instead met with a barrage of criticism, with one commenter labelling the idea "absolutely abhorrent".

“I'm pretty child-free and I think this is absolutely abhorrent,” they wrote.

“If you don't want to be in a partner’s kid's life, don't be with that person at all! When I was single I had a strict no dating parents policy for this reason.”

They weren’t the only ones to offer up harsh criticism of the bride’s demands.

Another posted: “She’s three, of course she makes everything about her…that’s all she knows.

“This marriage (if it happens) is gonna end quick or last way too long and be horrible the entire time.”