THREE Babestation models have visited Westport in Co. Mayo to apologise for a recent spate of late-night phone calls made to the town.

Vicky Narni, Priya Young and Alexa Brooke showed up shortly after 3pm yesterday to take to the streets of the windswept town and meet locals.

Residents of Westport were left “aggravated and annoyed” earlier this week after a number of them received calls bound for Babestation in Britain.

Local TD Michael Ring quickly took up their cause after complaints were made.

The situation emerged after men looking to call into the sex line forgot to add Britain’s international country code to Babestation’s phone number.

The late night calls were instead rerouted to a number of residences in the sleepy Mayo town.

Babestation revealed plans to send a group of models to the town to apologise on Tuesday.

"In a show of support and recognition, Babestation, and two of their models, will be visiting Westport on 26 January at around 2pm to speak to residents and local people," a statement from Babestation said.

Here's how local paper The Mayo News reported the visit...

The adult channel added that it would change its numbers to “negate the issue in its entirety.”

A number of locals pushed their way past the media frenzy to take pictures with the women after their arrival in Westport yesterday afternoon.

“We’re sorry for any offence we caused anyone,” Alexa Brooke told the Mayo News. 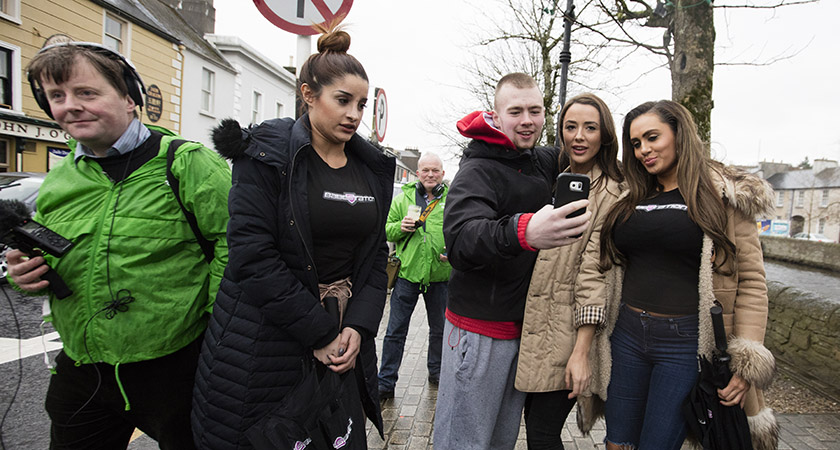 A local man takes a selfie with the models. Photo: Eamonn Farrell/RollingNews.ie

“We’re here to make friends with everybody. We want to build relationships with them and apologise, obviously, for the inconvenience.

“We’re actually a really nice bunch of people, as I’m sure they are and, hopefully, we can build a long and lasting friendship.”

Michael Ring TD was not among those meeting with the women having declined Babestation’s invitation to meet.

The British TV sex line has aired since 2002 on late night television channels in Britain. The adult channel is also available in Ireland on a number of TV packages.