TWO Belfast buskers have apologised after a video captured them singing the lyric ‘Can’t start a fire’ as an historic building burned behind them.

Chloe Magee and Maryjane McIvor said there was ‘no malicious intent’ when they played Bruce Springsteen’s Dancing in the Dark.

A 10-second video – which has since been viewed thousands of times – only recorded the section with the offending lyric as the 233-year-old Bank Building, which housed Primark, burned in the background.

However to make amends for any offence caused, they donated their earnings from the day to the Fire Fighters Charity.

“Our intentions were not to offend anyone,” explained Maryjane in the post.

“At the time, the fire had only just started and didn’t seem serious.

“Only 20 or so minutes later, the cordon was extended and we had to move further down the street, and only then did we realise the severity of the fire. 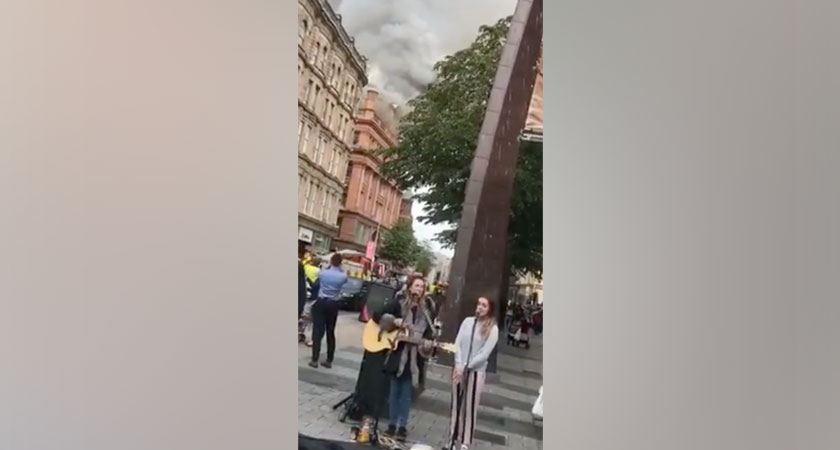 The pair busking in Belfast

“We did not expect the building to be engulfed by the flames so quickly and we are relieved that no one was hurt and that the building was evacuated safely.

“By this time, the video of us, which we did not upload, already had over thousands of views. We realise now, it was a poor song choice.

“For us, the song was just another song in the limited set list, Chloe & I share. We fully understand how people could find the lyrics in the video inappropriate.

“We apologise to anyone who was offended, but there was no malicious intent.”

The pair rounded up their £76.38 takings for the day and donated it to the Fire Fighters Charity, which supports current and former firefighters and their families.

“We praise the work of the firefighters on the scene who worked tirelessly to try and bring the blaze under control,” added Maryjane.

“It’s a tragic loss for the city of Belfast, and we offer our condolences.”

The pair also revealed they have since received abuse online, claiming some people have said they should have been trapped in the building.

However others praised them for their apology and gesture, with many commenters saying people in Northern Ireland had lost their sense of humour.

No one was injured in the fire, which started on Tuesday morning and gutted the building.

Staff will be paid for this week with further talks planned between Primark and the Usdaw union.

“The company has reassured me that the welfare and job security of the staff is their priority,” said Usdaw’s Michala Lafferty.