COLM MEANEY has lifted the lid on the “curse” that dogged one of his co-stars on the classic Irish film The Snapper.

To some Pat Laffan will always be remembered for his winning turn as lothario milkman Pat Mustard on the iconic sitcom Father Ted.

However, prior to that role, he was best remembered as George Burgess, the middle-aged father and star of The Snapper, whose tryst with Sharon in the boot of a car results in a pregnancy that puts in motion the events of the popular Roddy Doyle adaptation.

One of the most enduring characters in Irish cinema, for many years Laffan was unable to step foot in any pub across Dublin without hearing the words “It’s George Burgess” – in reference to one classic scene from Stephen Frears’s film.

Laffan passed away in March 2019, but memories of his highly amusing torment live on with his co-star Meaney, who played Burgess’s worst enemy on the film, Sharon’s father Dessie.

“It must have been awful for Pat,” Meaney explained on the latest episode of the Back To Barrytown documentary series.

“After the film came out, it was very hard for the two of us to go out in Dublin together.

“We had one experience in Capel Street, where this tribe of kids just came out of nowhere and surrounded us, screaming and roaring, and started moving along with us.

“It was so bad we had to hide in a gallery for half an hour until we got the all clear. We must have got ten yards down the road and all the kids appeared again, shouting, ‘Georgie Burgess’.”

Despite the unwanted attention generated by The Snapper, Laffan loved playing the character in the much-loved 1993 film. 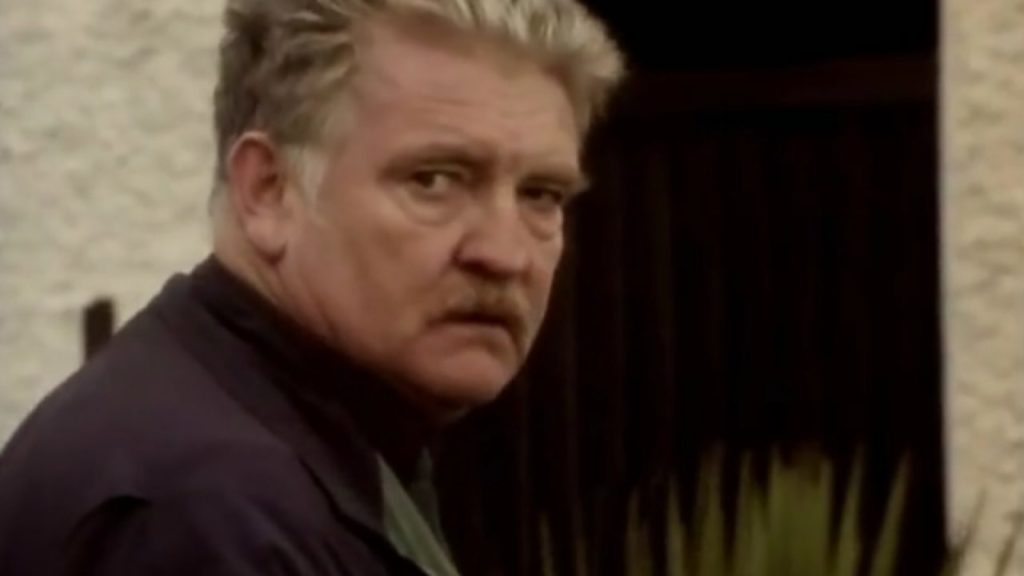 For Meaney, the chance to work alongside the legendary Abbey Theatre actor was one that he realished.

“Pat was a mentor to me when I went to work in the Abbey so it was a joy to work with him 20 years later.”

According to the documentary, several real-life George Burgesses suffered as a result of the curse.

One man with the same name remembered the moment only too well.

A second said: “Somebody referred to me as ‘Burgess you bastard’, and it was meant affectionately rather than offensively. I actually did have a girlfriend once called Sharon and people would go ‘Ah Georgie and Sharon . . . I would often introduce myself as ‘Georgie Burgess, like in the film The Snapper’.”

While he relished the role of Georgie, Lafffan was less keen on filming the sex scene that kicked off the events of the film.

Co-star Tina Kellegher, who played the pivotal part of Sharon recalled: “That famous scene on the car, that was nobody’s pleasure doing that.

“Pat didn’t enjoy it either, we were both glad to get that one behind us.

“Looking back, Pat had an amazingly difficult part to play but he pulled it off by playing a rounded complex man.”

A fascinating look back at the film, Back To Barrytown detailed how Doyle pushed to make The Snapper a low budget affair off the back of the success of The Commitments – a success that helped him gain more control.

Shot by Frears on 16mm, The Snapper was made on location in Kilbarrack, while the cast was limited to just 10 key players.

It took just 30 days to film and was distinctive for featuring little in the way of what Doyle describes as “diddly-eye music”.

Originally intented as a film to air on the BBC, The Snapper earned a standing ovation when it was screened at Cannes in a development that saw it earn a cinema release.

To date, Frears ranks it among his best films.

“The Snapper is a jewel in my life and the best film I’ve ever made because its heart is bigger than anything else,” he said.

“I learned all about the Irish making it, and I came back to London intoxicated with the family values I had learned about Ireland.”

Even so, it was not without the occasional bit of controversy with audiences in the US left shocked at the scenes in which the pregnant Sharon went out boozing with her friends.

Meaney said: “When The Snapper came out in America, the idea of a pregnant woman drinking was absolutely shocking.”

Kellegher added: “Sharon took her pregnancy very seriously and then sometimes, she went a bit mad and went out with the girls, as she was still a young one.”

Doyle noted: “I always pointed out the baby was healthy when it was born.”