The statue that was recovered after it was stolen over the weekend (Source: Ireland Planner/Facebook)

AN Garda Síochána is investigating the robbery of sculpture over the weekend from the Senator George Mitchell Peace Bridge, that stands at the border between the North and South of Ireland.

The sculpture, which was later recovered, bears the message 'Peace for All'.

It was erected on the Southern side of the Mitchell Peace bridge on the Cavan-Fermanagh border. The statue was created to symbolize peace in post-Good Friday agreement Northern Ireland. 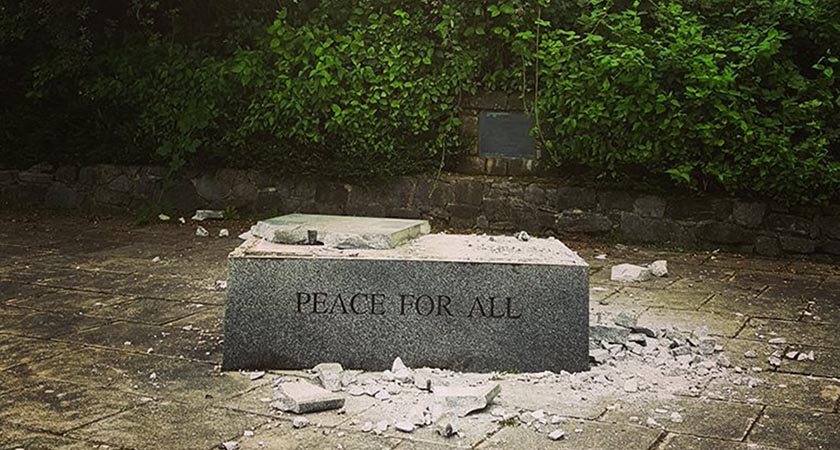 The Aghalane bridge, over Woodford river, was blown up in 1972 during the height of the Troubles by loyalist paramilitaries but was re-built in 1999. The statue was added as a symbol of rebuilding relationships and reconciliation.

Local Sinn Fein councilor for the area, Damien Brady condemned the theft of the statue.

He told The Irish Post: "People are disgusted at what happened over the weekend and outraged that someone would try and steal it, thankfully they were unsuccessful and the statue was recovered. But a lot of damage was done to the plinth that the statue stands on.

Back in the 1970s, the rebuilding of the bridge sparked a political row between unionists and nationalists.

The British security forces had no desire to see the reopening of the Aghalane Bridge.

Then, on December 28th, 1972, a car bomb killed two teenagers in Belturbet, Geraldine O’Reilly was 15, Paddy Stanley was 16. Loyalist terrorists were thought to be to blame, but no one was charged.

He alleged that they had "re-opened the bridge", thereby giving "easy access for terrorists".

On December 27, 1972, Lieutenant-Colonel A. T. P. Millen noted that "the destruction" of Aghalane Bridge "suits us well in that it closes a route frequently used by Republic-based terrorists".

A Garda spokesperson confirmed to The Irish Post that they were investigating the theft.

"Gardaí are investigating the theft of a statue at Lagan, Belturbet which occurred between 06/08/16 and 07/08/16 - The statue was recovered a short distance away. No arrests have been made and investigations are on-going"

Family of Irish man missing in Netherlands appealing for help