The 4 wonderful medalists climbed the Olympic podium as the Irish Flag is raised on the flagpole for the first time of this Summer Olympic Games Tokyo 2020.

What a moment in history for these 4 amazing athletes, rowing from Dublin, Galway and Cork – showing the widespread strength in the sport in Ireland - "it really is an All-Ireland team - inspiring !" said David Gillick.

The Irish were trailing in 6th place, then 5th, and then were competing with the Great Britain boat for 4th or 3rd spot. As the Irish drew level, the four oared stronger and edged ahead in the final 500m, they pulled clear to cross the line behind Australia and Netherlands to secure Bronze Medals for Ireland. 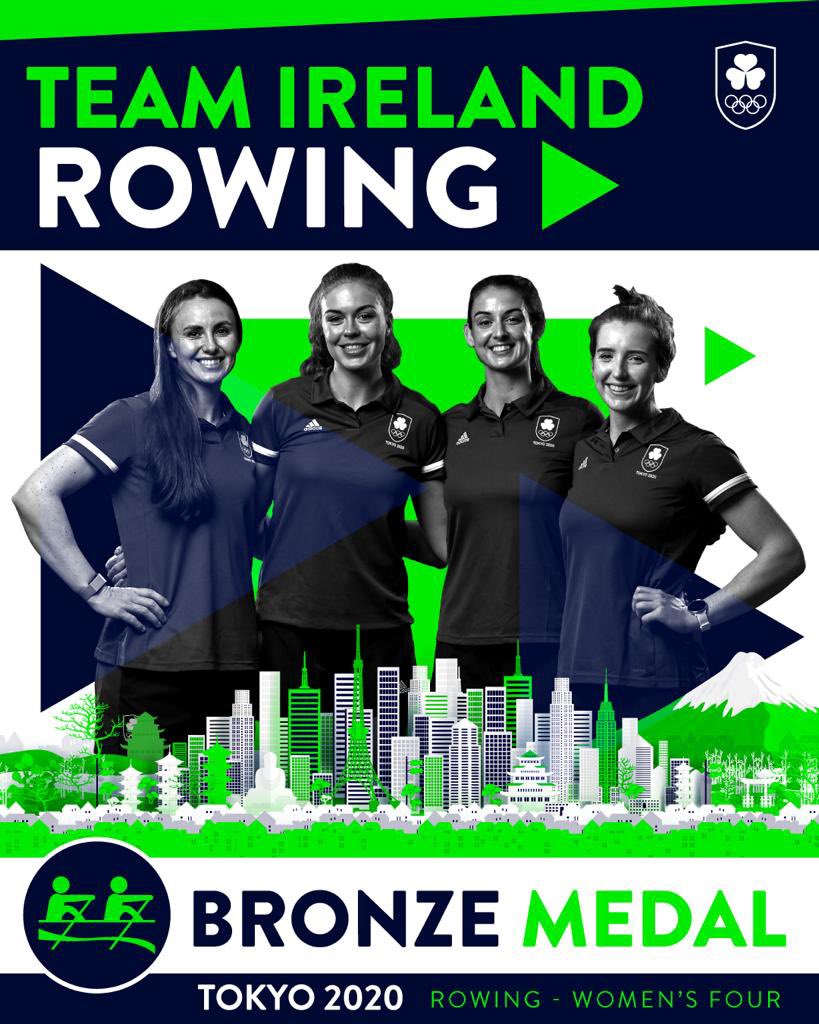 From Cabra, Dublin, Eimear Lambe started rowing in 2012 and competing for Ireland in 2015.
First competed internationally at the Coupe de la Jeunesse in 2014 and also raced at the 2014 Youth Olympics. Studied International Commerce and German at UCD. Younger sister of Rio Olympian Claire.

Galway’s Aifric Keogh from Na Forbacha (Furbo), started rowing in 2006 in the Jes in Galway, and studied food microbiology at UCC. Was part of the women’s double earlier in this Olympic campaign. A world finalist who finished sixth, with Emily Hegarty in Paris 2018.
They were the first Irish women’s pair to make a World final.
Set world records on the ergometer (indoors) during 2020 Covid Lockdowns.

Also from Galway Fiona Murtagh started rowing in 2009 and studied science at NUIG and Fordham University, New York. Won the prestigious Head of Charles (in Boston) two years in a row. Won bronze at the 2020 European Championships in the Women’s Four and silver at this year’s Europeans.

From Skibbereen Co.Cork Emily Hegarty is also a Bronze Medalist – who started rowing in 2009 and studies biological science at UCC. Won silver at 2019 World U23 Championships in Sarasota and a bronze medal in the Women’s Pair at the U23 2020 European Rowing Championships alongside UCC teammate Tara Hanlon.

This crew won silver at the 2021 European Rowing Championships in Varese (Italy) and went on to qualify the Women’s Four boat for Tokyo at the final Olympic qualification regatta in May. Three of this crew - Fiona, Eimear and Aifric (with Aileen Crowley) – won European bronze in 2020.

You can beat an Olympic Medal!!!