ALL the commotion ahead of the Euros this week will be like water off a duck’s back to the lads in the Ireland squad.

Privately, they will have heard far worse than Roy Keane’s pubic criticism and I doubt it will have affected anyone adversely, although the lads going home were the real victims.

Of those cruelly cut before the squad depart for France, I felt particularly sorry for David Forde, who has performed brilliantly when called upon.

More telling was the shape and formation of the team in what was the penultimate match before the big kick off.

It would have been good to see the most likely starting XI play to iron out any deficiencies or look at a different shape, such as playing very defensively, which would have been possible at the smaller stadium rather than at the Aviva where the onus would be on attacking.

It is far easier to rip up a picture than it is to draw one and for Ireland I would have used the Belarus match to concentrate on being as solid defensively as possible with 11 men behind the ball.

I feel this is the best way for Ireland to succeed in the tournament, at least to begin with, my rationale being anything other than a defeat is a bonus – so let’s start with what we have, and build for the next game because one win may be all we need. 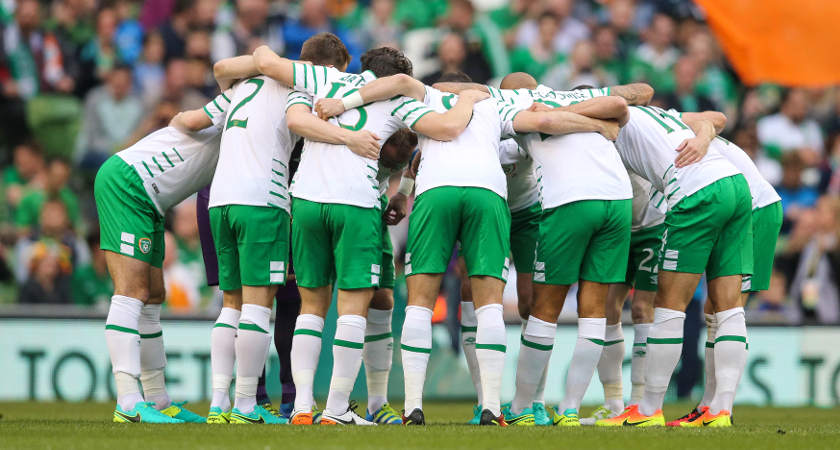 The Ireland team huddle before the 1-1 draw with Holland [Picture: ©INPHO/Gary Carr]
As we showed against the Dutch, we are a handful at set plays; we have pace out wide and on the counter-attack, we just need to be compact in defence and midfield and invite a mistake or two from the Swedes rather than taking the game to them, so it would have been good to see this game-plan in the final warm-up match.

Some of the lads in the squad are at clubs that play that way and I feel it would suit what we have particularly against the sides we will face who will have the lion’s share of possession.

In the lead up to a tournament, you don't have time to radically change a style or implement any formation changes, but you can refine what you do to make it as polished as it can be and I feel the Belarus game was a chance to do that.

As England found out against Portugal, having two forwards and another just behind doesn’t mean you will score goals. I remember Shane Long scoring on the counter against Germany and I am sure similar tactics will be equally effective.

None of Ireland's opponents will be looking forward to facing us if we play like that and there isn't anything to fear from Sweden, Belgium or Italy if Ireland adopt the stance we had when I was part of the squad.

We were respectful of the opposition, but we didn't fear anyone, we kicked lumps out of opponents and worked our socks off, elements which will take you to a point, and that point may be enough to take this team to the next round where the team can reassess their situation once they know their next opponents.

We have a team full of height and pace with a real physical presence, qualities we should not be afraid to use.

I think the aggression typically shown by Roy Keane in his playing days is what the team needs in the opening match against Sweden on Monday – to get in and amongst what are undoubtedly very talented players but who would prefer an easy ride.

We saw glimpses of it against the Netherlands and their manager Danny Blind didn't take too kindly to it, which is exactly what Ireland need to do at the tournament - ruffle a few feathers.