Conor McGregor sued for over €13,000 by fan after alleged 'phone smashing' attack

CONOR MCGREGOR is being sued for over $15,000 by a man who claims the Irish fighter smashed his phone in Miami.

UFC star McGregor, 30, was arrested and charged with strong-arm robbery and misdemeanour criminal mischief over the alleged incident at a hotel on March 11.

He was subsequently released on bail from Miami-Dade County’s Turner Guilford Knight Correctional Centre after posting his $12,500 bond.

Ahmed Abdirzak, 22, has now filed a civil lawsuit against McGregor accusing him of battery, assault and intentional infliction of emotional distress – seeking upwards of $15,000 (€13,000/£11,000) in damages .

Mr Abdirzak claims he was taking a photo of McGregor outside the Fontainebleau Miami Beach hotel when the former two-weight UFC champion allegedly grabbed his phone, slapped it to the ground and stamped on it.

He further alleges that he went after McGregor to try and get his phone back from his pocket but he just laughed and swore back at him. 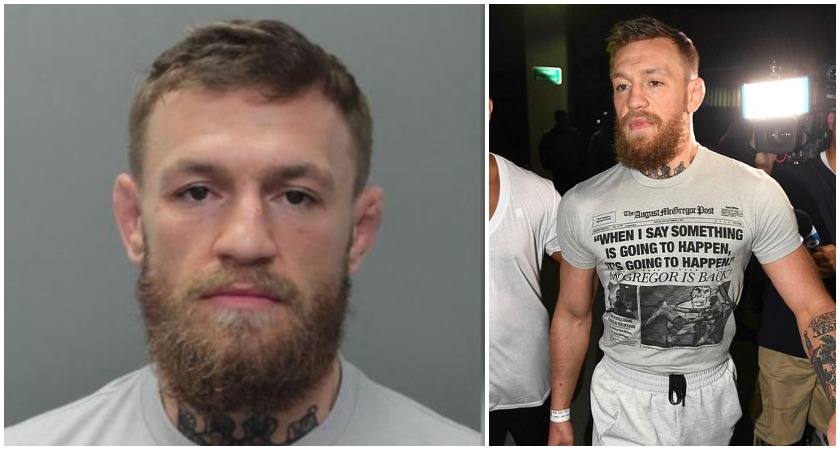 McGregor, 30, was released on bail after the incident on March 11 (Image: Miami Beach Police/Instagram)

"He gave me his hand for me to shake, I have that on camera, I’ve got my phone out, I’m recording me shaking Conor McGregor's hand," Mr Abdirzak told the Mirror.

"He pulls me in with his hand and with his right-hand slaps my hand with the phone. Like proper power. Full power. Slap my wrist. The phone falls to the floor.

"He starts stamping on my phone, picks my phone up off the floor, puts it in his pocket, does the McGregor walk, gets in his chauffeur car and says 'F**k you' and goes away."

McGregor's representation issued a statement on the lawsuit, branding it "nothing more than a quick effort seeking a payday".

The MMA star himself wrote on Instagram after his arrest: "Patience in this world is a virtue I continue to work on. I love my fans dearly. Thank you all."

Footage of the alleged incident has since been released by TMZ.