THE family of Margaret Keane, who battled to have their mother's gravestone inscribed with an Irish-only phrase, have welcomed a court judgment which found they were discriminated against on grounds of race.

Based in Coventry, the Keane family have endured an extremely emotional few years since their mother died in 2018.

Mrs Keane hailed from Athboy, Co. Meath, but she and her husband Bernie became integral parts of the Irish community in Coventry after setting up home there many decades ago.

When she passed, unexpectedly, three years ago, her family decided to inscribe her gravestone with the Gaelic phrase ‘Inár gcroí go deo’, meaning ‘In our hearts forever’.

But in May 2020 Stephen Eyre QC, the Chancellor of the Consistory Court of the Diocese of Coventry, ruled that the family’s intended phrase must be accompanied by a translation, because it could be deemed “political” without one.

The anti-Irish ruling sparked uproar across the Irish community in Britain and further afield and the family’s subsequent appeal to have that decision overturned, which took place in February led by the family’s legal team, barristers Caoilfhionn Gallagher QC and Mary-Rachel McCabe and solicitor Caroline Brogan, was upheld following a hearing at St Mary-Le-Bow Church in London.

Today (June 17), the full written judgement from that hearing was handed down – in which the Arches Court of Canterbury confirmed that the decision of the Chancellor not to permit the family’s inscription in Irish-only was unreasonable under the common law, and in breach of the family’s right not to be discriminated against under the Human Rights Act and Article 14 of the European Convention on Human Rights.

The judgment also directs all Diocesan Chancellors to review their Churchyard Regulations to ensure that they are not discriminatory, particularly in relation to non-English inscriptions.

“We find that the effect of the Chancellor’s decision was to discriminate directly against the Appellant on the basis of her race” it states, adding that “an assumption seems to have been made that viewers of the inscription, realising that it was in Irish, would conclude that it was a political slogan, which we have found not to be based upon evidence or any other rational footing. The requirement for translation was, therefore, based upon Irishness, a racial characteristic”. 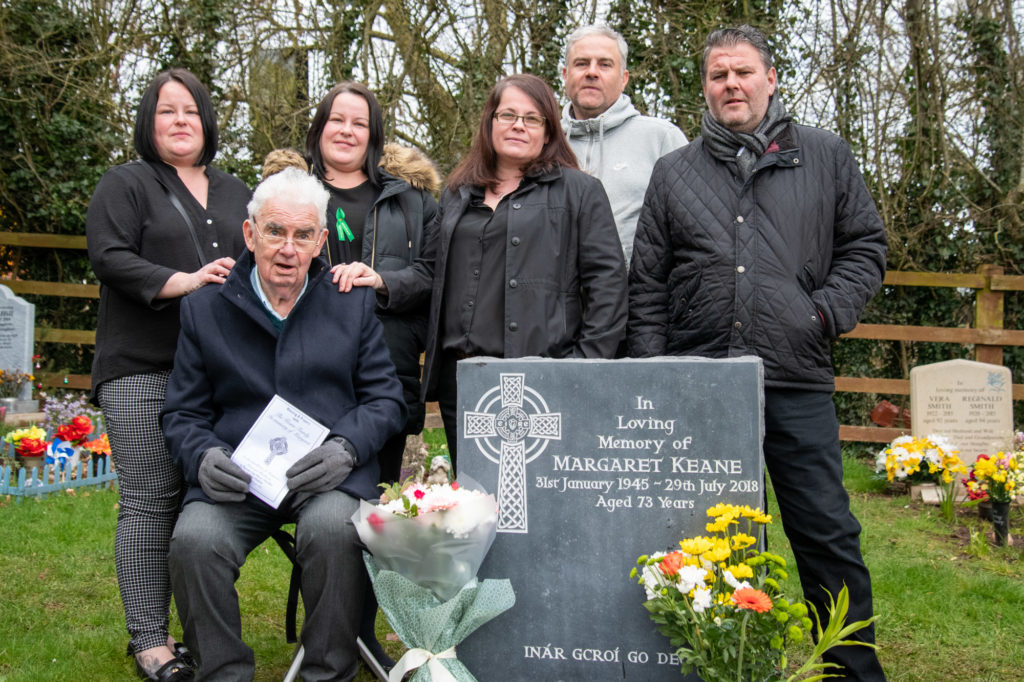 Responding to the judgement, Margaret’s daughter Bez Martin said: “It’s quite overwhelming, but mum always taught us the difference between right and wrong and so we always knew in our own hearts that we were doing the right thing by challenging discrimination and asking to be treated the same as the other parishioners.”

She added: “There are other headstones in the same churchyard with inscriptions in Hebrew, Latin and Welsh, without any English translation. There is even a headstone which includes “In our hearts forever” in Welsh; the same message we had asked for in Irish-only, but had been refused and so it was very painful knowing that we were being treated differently just because the inscription was to be in Irish.

“We feel vindicated that the appeal judges have recognised this and that we, just like the other parishioners, now have a loving memorial message in our mother language. We also always knew that our case went beyond our own family and we hope that we have given a voice to the otherwise unheard”.

Her sister Caroline Newey, who brought the appeal regarding their mother’s headstone, added: “As soon as we received the Judgment, the first person I had to tell was my mum and I went straight to her beautiful resting place at the Meadow.

“I was able to sit beside her gravestone and tell her that she is in our hearts forever and that we hope that our long battle all the way to the highest appeal court in the ecclesiastical system will mean that no other family has to go through this.”

She added: “The appeal court not only allowed us to have “In our hearts forever” in Irish-only on our mum’s grave, but they also sent a very clear message about respect for identity and inclusivity”.

Caroline Brogan of Irwin Mitchell, the family’s solicitor, added: “This is a landmark appeal court ruling on equality and the recognition of Irish language rights. The Irish language is not political; it is used by ordinary people every day. A person’s own language goes to the very heart of their own identity.

“Coventry is a vibrant, diverse and inclusive City; it is the City of Culture 2021. It produced Mo Mowlam; she grew up in Coventry and went to school here. Mo was one of the key architects of The Good Friday Agreement. At the heart of The Good Friday Agreement are principles of mutual respect for identity, linguistic diversity, and parity of esteem.

“The Good Friday Agreement must be respected and implemented in all of its parts.”

The Keane family and their legal team today thanked all those who have supported them throughout their appeal process, including members of the Irish community in Britain.