THE ELDERLY Irishman whose photo went viral this week - after he was spotted sitting in a pub with an alarm clock - has admitted he brought it with him so that he'd be "home in time for the news".

John Joe Quinn admits he was amazed to discover he'd become an overnight sensation, after being snapped in McGinn's Hop House in Galway's Woodquay on Monday, enjoying a meal and sipping from a pint of Guinness.

He had an alarm clock sitting on the table too, and once the photo was posted to Facebook, an outpouring of emotion across the country followed, with many presuming the clock was there so Mr Quinn could make sure he didn't stay beyond the allocated 90 minutes.

Many social media users used the opportunity to criticise the government for their rigourous Covid-19 restrictions, while others used it to highlight the troublesome issue of isolation during the pandemic, but John Joe admitted that he brought the clock with him for a far less selfless reason.

"I brought the alarm clock with me so I would get home in time to hear the news on RTÉ One at six o'clock," he told the Irish Independent.

"I always bring the clock with me, I never wear a watch." 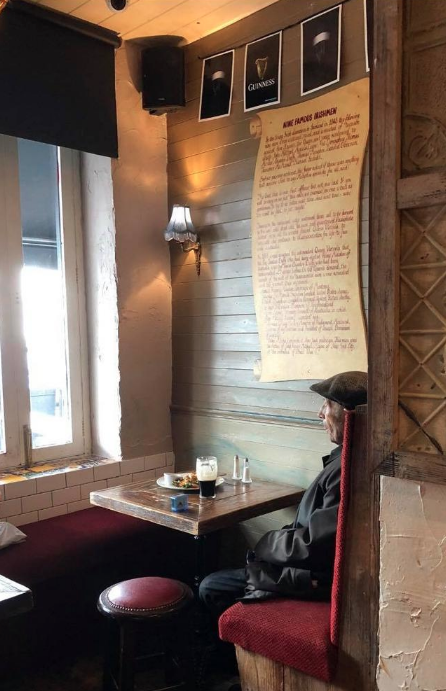 Oblivious to his newfound fame, he asked: "How am I famous? Oh yeah, the picture. Will I be on the television next?

"I don't know anything about computers or the internet. I'm an ordinary, plain man.

John Joe, who admitted that he was in his 80s, was told that a number of people had pledged money to the pub for him to enjoy a few pints, and while he admits the gesture was "very kind", he says he wants to pay his own way.

Despite his image being used by many to promote an end to public health restrictions, the pensioner stressed that following the rules is something we all must do.

"To hell with the feckin' pubs, health is more important. I mean, if that (coronavirus) spreads again, we're all in trouble," he said.

"I hope it doesn't. With the kids going to school again, you don't know.

"People need to do what they are told. That's as simple as that."