DETTA O'CATHAIN, the businesswoman and Conservative politician, has died at the age of 83.

After graduating at University College Dublin, she left Ireland for London in the mid-1960s. In England she became an increasingly successful businesswoman. Her first job was as economist with Tarmac where she worked until 1969.

Ms O’Cathain then spent a turbulent, controversial five years as managing director at the Barbican Centre in London from 1990 to 1995.

Although lauded for being a very able administrator, her time at the Barbican was marked by accusations of an authoritarian style which engendered much ill feeling.

O’Cathain would refer to those from artistic circles as “arty farty” types; considering that she was working in one of the UK’s premier arts centres, this was a sure way to court unpopularity.

To compound this, Mrs O’Cathain introduced a dress code, that included disapproval of  women wearing trousers or excessive bling. During a debate in the House of Lords she questioned the money spent on arts.

She said, “One man’s pile of bricks in the Tate is another man’s kidney dialysis machine … Taxpayers will always be somewhat uneasy with unfettered expenditure by creative people.” 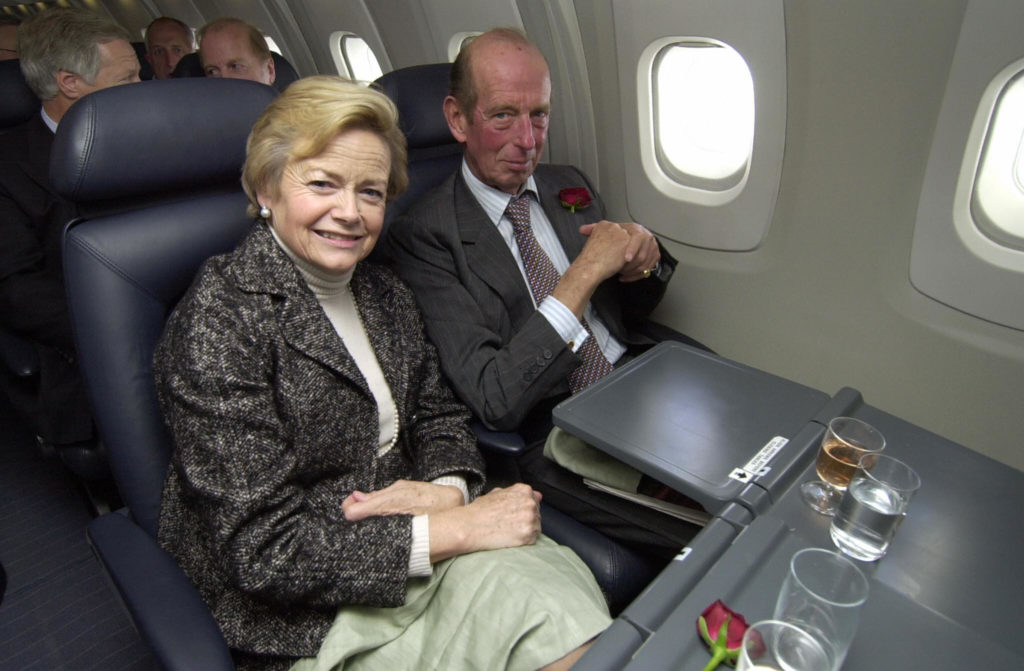 Baroness O'Cathain, then a member of the British Airways board, seated with the Duke of Kent, as they fly on Concorde in October 2003

At the Barbican, this domineering style resulted in her losing the support of her colleagues. By March 1995 she was gone.

The management announced that “Baroness O’Cathain is to take fully-paid leave of absence from her duties at the Barbican.”

O’Cathain remained bitter about the experience.

In tandem with her business career, Detta O’Cathain’s profile in politics grew ever more prominent.

Known for her socially conservative views, the Conservative Party was her natural home. She was particularly active in attempts to retain the ban on same-sex civil partnerships and marriage.

It was an ongoing campaign for her — In 2011 she led attempts by Conservative peers to scupper plans to allow same-sex couples to hold civil partnerships in churches.

She had a complex relationship with Ireland. She believed that her Irish upbringing and education gave her the values that would remain throughout her life, but that she had to leave the country of her birth to fulfil her ambitions.

Addressing the Irish Permanent 'Women in Business' series in Dublin, O'Cathain said: “Britain gave me all my opportunities and allowed me to have the wonderfully life that I have had. If I had stayed in Ireland I would have remained a Grade Three clerk in Aer Lingus.''

Although Detta O’Cathain enjoyed a highly successful career, her personal life was blighted by tragedy. In 1989 her husband William Bishop, 20 years her senior, suffered a stroke.

He was left paralysed and in need of 24-hour care.