Armed policemen stand in a cordoned off area after a van ploughed into the crowd, injuring several persons on the Rambla in Barcelona on August 17, 2017. Police in Barcelona said they were dealing with a "terrorist attack" after a vehicle ploughed into a crowd of pedestrians on the city's famous Las Ramblas boulevard on August 17, 2017. Police were clearing the area after the incident, which has left a number of people injured. / AFP PHOTO / Josep LAGO (Photo credit should read JOSEP LAGO/AFP/Getty Images)

THERE have been a number of confirmed deaths following an attack in Barcelona which police have called 'an act of terrorism.'

A van ploughed into pedestrians in the popular tourist area of the city, Las Ramblas shortly after 4pm this afternoon.

According to local media, two armed men were seen leaving the van, and fled on foot and entered a restaurant in the city.

It's understood the men remain inside the restaurant, and the incident is ongoing.

At least two people have been comfirmed dead, while it's believed there are at least 20 injured.

There have also been unconfirmed reports of at least 13 fatalities, local media has said.

The Embassy of Ireland in Madrid have said Irish citizens in Barcelona should avoid the area. 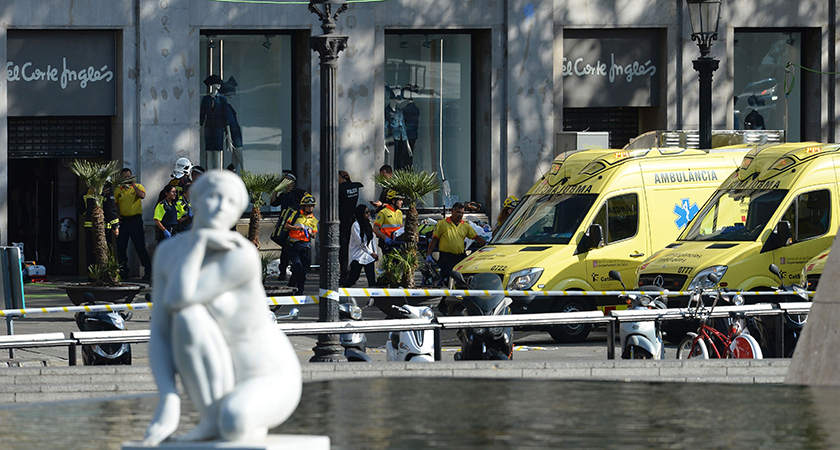 A person is stretched out of a mall in Rambla, Barcelona  (Picture: Josep Lago/AFP/Getty Images)

The Department of Foreign Affairs has said it is monitoring developments closely through the Irish Embassy in Madrid and Ireland’s Honorary Consul in Barcelona.

Minister Coveney added: "I am appalled by the incident in Barcelona this afternoon. On behalf of the Irish Government, I wish to convey our condolences and solidarity with the people of Spain at this time."

Emergency services have also asked to close metro and train stations and that people avoid the area.

Another witness described ‘chaotic scenes,’ and said police had locked some members into a local church for safety.

Anyone with concerns for the safety of loved ones in Barcelona can contact the Consular Assistance team in the Department on 01-4082000 or the Irish Embassy in Madrid on +34 914364093.