Delving into the female side of Ireland's mythology

Irish mythology is “one of the brightest gems of European cultural inheritance - unique and dynamic, a mythology which ought to be as well-known and as valued as those of ancient Greece and Rome.”

So why is it not? And why are Ireland’s passports full of neoclassical iconography? And could we do better?

This is the theme of ÉIRÍ – an art competition and research project anyone can participate in – with €10,000 up for grabs.

The word Éirí means “arising”, “ascending”, “soaring”, “reviving”, “waking”, “becoming”. and we draw on this for the name of the project; our acronym ÉIRÍ stands for “Évoking Ireland’s Resilient female Ícons”. Artists, young and old, are invited to create art in any form, literary or visual, that helps revive awareness of any female figure from Ireland’s mythology or folklore. People are also invited to send their own thoughts or research on how such women inspire.

Avril Egan’s acrylic painting inspired by the Sinann story as related on storyarchaeology.com

The project stems from a report in the Irish Post a few years ago. Athlone man Ralph Kenna had led a joint study by British and Irish universities which mapped out the society depicted in the epic poems of Ossian. In the 1760s, James Macpherson claimed to have translated these from Scottish Gaelic. But he distanced them from Irish sources, claiming they were like the Greek Classics. Controversy arose as Irish scholars immediately saw them as misappropriating Irish mythology. Kenna’s team used mathematics to show there is, indeed, a remarkable similarity between Ossian and Irish mythology – and little similarity to the classics.

So why did MacPherson want to distance his work from Irish mythology and position it with the classics?

In the colonial era, conquest was `justified’ if it replaced a devalued, inferior, and expendable culture. Alignment of Ossian with the classics was a massive case of inferiority complex.

In the 1780s, with Ossianic poems in vogue, the Custom house was built in Dublin. It was commissioned by Ireland’s first tax collector whose world was one of “privileged nobility.” Beneath was an “impoverished underclass struggling for basic civil rights” and any protest “kept down by a policy of unyielding repression.” Fourteen “river-god heads” were perched on the Custom House - representing the wealth of Ireland’s rivers and export to the British Empire. All but one are male!

The statue purporting to represent the Boyne has the inscription “1690” (the date of the Battle of the Boyne) blazoned across its brow. The Foyle celebrates the year 1689 (Siege of Derry). In case there is any doubt, the Crown of England is perched superior to the Harp of Ireland on the Custom House.

But in Irish mythology, the Boyne is associated with Boann – a woman. The Shannon likewise is female – named after Sinann, who brought about the river’s creation. Sinann was recently overwritten by Athlone’s Council who, in erecting a statue marking the town’s Shannon heritage, drew from Custom House, despite it having nothing to do with Athlone and despite none of the town’s secular iconography being female.

After having been made aware of the mathematical research through the pages of the Irish Post, 700 people signed a petition in favour of Sinann. An arts competition ensured Sinann would never again be forgotten in Athlone, where her story is now well-known and valued.

Like Athlone’s unwanted statue, the “river-god heads” in Irelands passports come from the Custom House. ÉIRÍ has a similar aim to the “Art for Sinann” project that we ran last year. But it is on a greater scale - €10,000 is up for grabs to raise awareness of women in Irish mythology. And this time, we welcome people’s views about the value of women in Irish mythology and folklore as among “the brightest gems of European cultural inheritance.”

Kenna explained: “This is an opportunity for people to help reawaken awareness of Ireland’s forgotten female mythical figures. So let your creativity flow to represent women in the stories our ancestors bequeathed us. Help them arise, ascend and soar to inspire a future where women are better recognised and represented in our local and national iconography.” 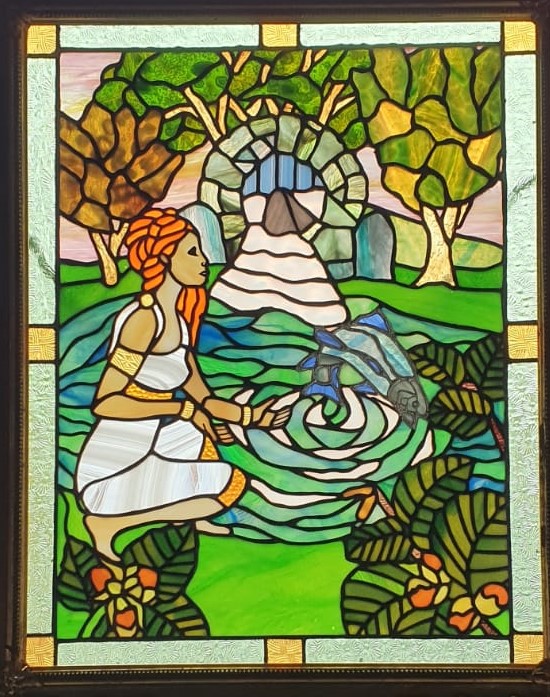 There are seven prizes of €1,000 each on offer for the adult category of the competition and there will up to €3,000 for schools.

Entries must be received by Samhain, October 31, 2022 - when the fruit of your mythical artistic endeavors will be harvested.

Once all entries have been received a broad panel of judges will be on board to select the competition winners.

These should be accompanied by a description of how the art relates to Irish mythology or folklore.

Further details about the project can be found on the Story Archaeology website: https://storyarchaeology.com/an-arts-competition-and-participatory-research-project-on-myth-and-gender

The artwork can be in an any artistic medium and all entries must be submitted by October 31, 2022.

Submissions may feature in an online gallery on www.irishpost.com

Entries can take the form of text or photographs of art sent via email.

Entries must be original; they cannot have been previously published/entered in competition

Please submit your name and contact details in the email message, separate to the image of artwork or submitted literary piece. The entrant’s identity must not appear on the competition entry.

Entries may be in Irish or in English /Is féidir iontrálacha a bheith i mBéarla nó i nGaeilge.

A number of entries may be submitted per entrant.

The judges’ verdict is final.

Winners only will be notified.

No alternative prizes are available - prizes cannot be exchanged.

The Irish Post, Coventry University FCS, Rathcroghan Visitor Centre, The Story Archaeologists and are not responsible for any costs incurred by competition entrants

Awards/winners may not be presented/chosen where an appropriate standard of entry is not achieved.